Taiwanese actor Rio Peng was so touched when singer Jay Chou posted an Instagram Story of a drawing by a fan with Down Syndrome that he shed tears.

Peng, 43, who used to be in popular boy band 5566, opened up on the backstory on Facebook and Instagram on Monday (June 28): "My good friend Jerry's niece has Down Syndrome and her biggest joy in life is supporting Jay Chou."

Earlier this month, Chou had collaborated with auction house Sotheby's Hong Kong to curate art pieces for auction, which ended on June 22. On his Instagram account, the 42-year-old had been promoting the works that will go under the hammer, including one by Jean-Michel Basquiat, and asked art lovers and kids to also do some drawing.

Peng said: "My friend's niece worked hard at her art, using her talent and imagination, but of course she needed more time and effort than other people to complete the drawing. Her father sent me her artwork today and I didn't expect her to put so much effort into it."

The little girl had drawn some of Chou's favourite things - a cup of bubble tea, his microphone, his five-year-old daughter Hathaway's play castle and a black car, as the King of Mandopop collects luxury cars.

Peng added: "Her father sent it to me simply to thank Jay for filling his daughter's life with hope and colour."

He then forwarded it to his pal Chou, not expecting that he would ask for the girl's name and then post it on his Instagram Stories.

"When I saw it, I was moved to tears," Peng said. "This is a huge encouragement to the family and to her, and such a heartwarming gesture."

"Jay Chou not only gives us good songs and concerts, but more importantly, his positive spirit has the power to influence so many people and to give so many people hope and warmth."

Peng ended with a reminder: "There are many people around us who have Down Syndrome. I hope we can all be kind and encouraging towards them and their families." – The Straits Times/Asia News Network 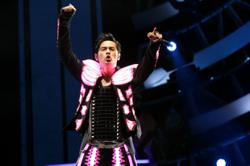