Seo Ye-Ji will be replaced in K-drama ‘Island’. Photo: Google

Seo Ye-ji’s agency confirmed that the actress will not be starring in the upcoming K-drama Island.

The news was reported by a Korean media which quoted the agency saying that the decision between the star and the production team was mutual.

In a previous report, the series was said to premiere sometime in the second half of 2021 and It’s Okay To Not Be Okay actress was in talks to play the female lead role.

However, last month, Seo was caught in a number scandals including allegedly “controlling” her then-boyfriend Kim Jung-hyun to act irrationally on his drama set, mistreating her staff members, forging her educational background and that she was a bully at school.

Following these allegations, a number of brands dropped her as their model. She was also reportedly dropped from Island.

A fantasy drama based on a webtoon of the same name, Island will be headlined by Kim Nam-gil (The Fiery Priest).

Set on Jeju Island, the series follows an immortal monster hunter (Kim) who fights the evil creatures on the island that want to harm the human world.

Seo would’ve played the role of a chaebol heiress who arrives on the island and becomes the target of these monsters.

The production will now cast a new actress for the role. 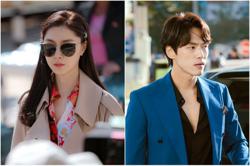