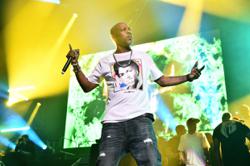 In this file photo taken on July 23,2017 rapper DMX performs during week five of the BIG3 three on three basketball league at UIC Pavilion in Chicago, Illinois. DMX, rapper known for signature growls and hip hop hits, has died according to US media on April 9,2021. Photo: AFP

"We are deeply saddened to announce today that our loved one, DMX, birth name of Earl Simmons, passed away at 50-years-old at White Plains Hospital with his family by his side after being placed on life support for the past few days," his family said in a statement.

"Earl was a warrior who fought till the very end. He loved his family with all of his heart and we cherish the times we spent with him. Earl's music inspired countless fans across the world and his iconic legacy will live on forever. We appreciate all of the love and support during this incredibly difficult time.

“Please respect our privacy as we grieve the loss of our brother, father, uncle and the man the world knew as DMX. We will share information about his memorial service once details are finalised."

DMX was hospitalised last Friday night after suffering a heart attack. His manager, Steve Rifkind, said on Wednesday that he remained on life support and in a coma, and was scheduled to undergo brain function tests.

Initial reports said DMX suffered the heart attack after an overdose, but his reps have not confirmed that information.

The gruff-voiced New York rapper, whose real name was Earl Simmons, first emerged in the late 1990s, with two enormously successful albums, his debut "It's Dark and Hell Is Hot" and "... And Then There Was X," both of which went to No. 1.

He released seven studio albums and appeared in several films, including "Belly" and "Romeo Must Die," but his life and career were dogged by substance abuse and run-ins with the law that saw him serving time in prison.

DMX was born in Mount Vernon, New York, just north of New York City, on Dec. 18,1970 to teenaged parents. Raised by his mother as a Jehovah's Witness, he had an abusive childhood and suffered from asthma and other ailments.

He spent a period at a boys' home, which is where he began rapping and writing music; an Oberheim DMX drum machine at the home was said to be the source of his rapper name. After spending time in jail as a teen - which is where he met early collaborator, rapper K-Solo - he signed with the Columbia-affiliated Ruff House label in 1992 (home to Cypress Hill, the Fugees, and others) and began releasing singles, without success.

Over the ensuring years he built a reputation appearing on songs with Jay-Z, LL Cool J, Mase, the Lox and others.

Yet he burst onto the national scene with the February 1998 release of "Get at Me Dog," which was released on Ruff Ryders, his management's label through Def Jam. It was followed by "Ruff Ryders Anthem" and his debut album, which debuted at No. 1 on the Billboard 200 - a rare feat for a new artistes during the CD age - and went on to sell more than 5 million copies.

As the flagship artiste of the Ruff Ryders label - which also spawned Eve and Swizz Beatz, among others - his gruff rapping and definitively 1990s beats made him an immediate celebrity and his style influenced multiple other rappers; he later beefed with his erstwhile friend, Ja Rule, whom he accused of stealing his rough-voiced style. The follow-up, "Flesh of My Flesh," continued that multiplatinum success.

He was nominated for three Grammy Awards: Best Rap Album for "... And Then There Was X" and Best Rap Solo Performance for "Party Up (Up in Here)" in 2001 and again for "Who We Be" the following year.

However, his career was dogged by controversy almost immediately. He is said to be the father of 15 children and was arrested multiple times in several different states, on charges stemming from drug and driving offenses to tax fraud, failure to pay child support, resisting arrest and animal cruelty, stemming from his raising and fighting pit bulls.

His record of legal troubles is significantly longer than his discography. He filed for Chapter 11 bankruptcy in 2013; in 2016, he was found unresponsive in a Yonkers, New York parking lot, an incident he later said was caused by his asthma.

His troubles were a consistent drag on his career: He released just two albums in the past 15 years, 2006's "Year of the Dog... Again" and 2012's "Undisputed." A handful of singles and guest appearances were released over the 2010s; in 2014 he was a headliner at the Def Jam 40th Anniversary Concert in Brooklyn and five years later announced that he had re-signed with the album, although no music had been released.

His most recent concert performance was in Las Vegas in December of 2019, following a long stint in rehab, although last July he and and his longtime friend and fellow canine-themed rapper Snoop Dogg faced off in a popular episode of the Verzuz DJ battle, which sees two performers or producers squaring off and comparing their musical histories. An audience of more than half a million tuned in for one of the most popular battles in the series.

His other film appearances included "Exit Wounds," "Never Die Alone" and "Cradle 2 the Grave." More recently, he had a cameo in "Top Five" and appeared in "Pimp" and action film "Beyond the Law." - Reuters 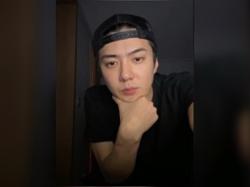