Taiwanese singer A-Mei shared an emotional post on Saturday (April 3) in which she expressed her sadness at the Taroko Express train crash that killed 51 people, including many children, and injured 179.

She allegedly cried after she learned that many passengers were crushed inside the carriages while some survivors were forced to climb out of windows and walk along the train’s roof to safety.

“I always like to be on this railway, which often takes me home, and look at the calm scenery outside the train window; at this moment, I look at the familiar scenery in the news, but I keep crying,” she wrote on social media.

Taiwanese model and actress Lin Chi-ling also posted to social media and said: “It hurts very much. God bless Taroko, let’s continue to pray for the passengers of Taiwan Railway No. 408 train, let’s cheer the disaster relief workers, and hope everyone can overcome these difficulties safely”.

It was reported that the devastating collision that happened on April 2 was caused when a parked railway maintenance vehicle slipped down an embankment and onto the tracks. A train packed with as many as 500 people at the start of a long holiday weekend then hit the truck just as it entered a narrow tunnel near the eastern coastal city of Hualien. - AFP 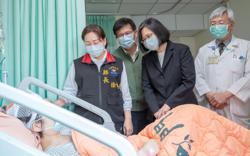 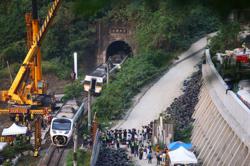