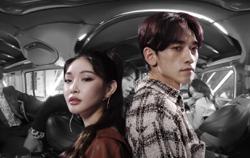 On a recent episode of the Korean entertainment show My Ugly Duckling, actor Cha In-pyo shared the moments he says “I love you” to his wife in a day.

He said: “... Once when I wake up in the morning, once when I go out, once when I come home, once after dinner. It might actually be about six times a day.”

He revealed that he would still call his wife to say those three words even if he’s busy working.

“My wife usually texts me back saying, ‘Me too.’ The words she says most are ‘Me too’ and ‘Don’t make a mess'.”

Cha can be seen in the new Netflix film What Happened To Mr Cha?, a comedy that uses some details from the actor’s own life.

Meanwhile, Shin appeared in last year’s K-drama Record Of Youth which was headlined by Park Bo-gum.

Here's your chance to be a Suria radio deejay