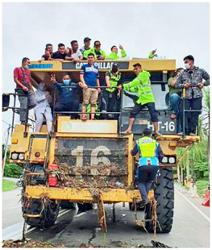 Two legendary titans face off in the first trailer for the new movie Godzilla vs. Kong.

The two exchange blows above the ocean, with Kong knocking Godzilla into the water, only for Godzilla to fire back with his atomic heat beam.

The film's release date was recently moved up to March 26 from May 21 after being moved around multiple times by Warner Bros due to the Covid-19 pandemic.

Following the Christmas Day release of Wonder Woman 1984, Godzilla vs. Kong will be one of the next tentpole films that Warner Bros. will release simultaneously in theatres and on the streaming platform HBO Max.

Legendary Pictures, the production company behind Godzilla vs. Kong, initially announced the project in 2015 as a crossover event between the Godzilla and King Kong franchises. This includes 2014's Godzilla, 2017's Kong: Skull Island and 2019's Godzilla: King of The Monsters.

Godzilla vs. Kong is being released in the middle of the pandemic and US consumers have the option of watching it from home with an HBO Max subscription or in theatres, though many around the country are still closed, so the film's box office potential is up in the air.

The film has the same US$160mil budget as Godzilla, which grossed US$524.9mil worldwide in 2014. Kong: Skull Island completed its box office run at US$566mil, while Godzilla: King Of The Monsters grossed US$386mil.

Given the franchise's international appeal and many countries beginning to roll out the Covid-19 vaccine, it will be interesting to see if Godzilla vs. Kong will pass the US$160mil threshold. – Reuters 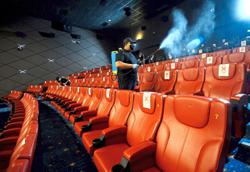