Taylor Swift accepts the award for artiste of the year at the American Music Awards. Photo: ABC/AP

The American Music Awards gave three trophies apiece to Taylor Swift, The Weeknd and Dan + Shay in a show that proceeded along the lines of a typical annual AMAs telecast while acknowledging that the live audience consisted of a handful of cheering fans in the Microsoft Theater's balcony in Los Angeles, California.

Viewers who prefer their shows politics-free finally had a 2020 awards show to pick not a single bone with.

Host Taraji P. Henson set the tone in her introductory remarks, saying that "we are one country. We need to heal. We need to love each other a little more, and that's what tonight is about." 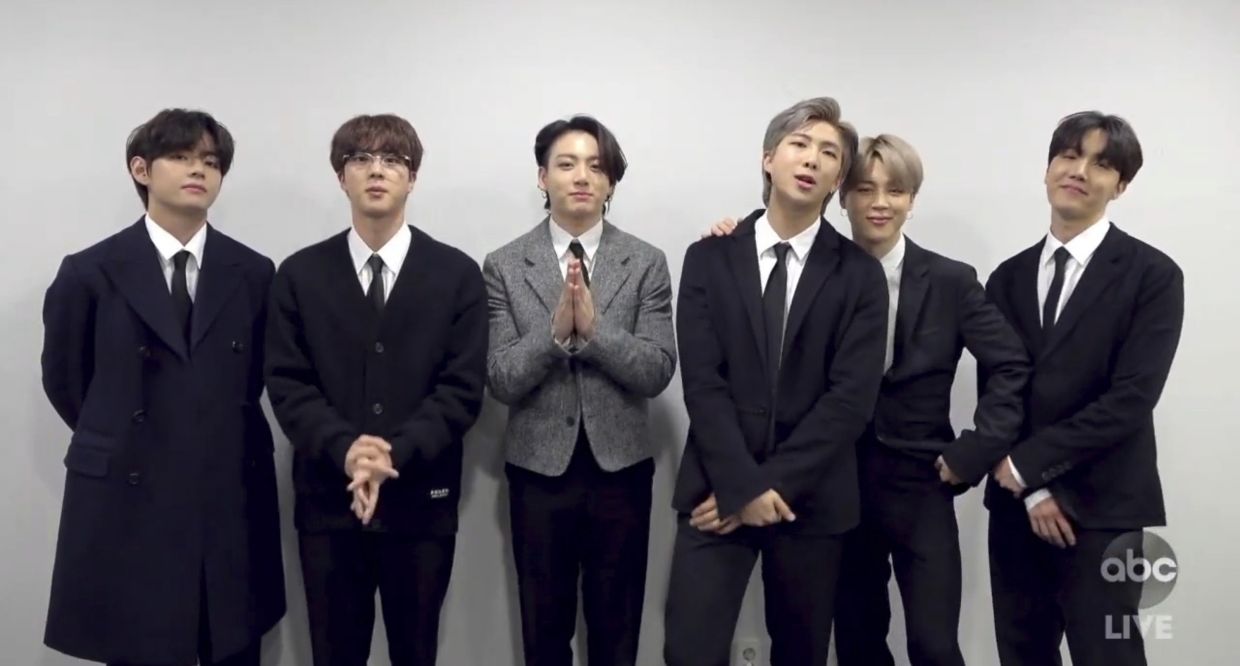 In this screen shot provided by ABC, BTS accepts the award for favourite pop/rock duo or group. Photo: ABC/AP

Recent or current events did not rear their head after that, aside from occasional fleeting allusions to the Covid-19 crisis – like Doja Cat's parting admonition in an acceptance speech to "stay safe."

The only direct mention of the nation's rapidly growing pandemic came when Henson referred to "our small but mighty Covid-free audience," referring to a smattering of fans in the front rows of the Microsoft's balcony, all wearing masks and scattered in small batches of what were said to be pre-tested family groupings.

The cutaways to these fans were somewhat at odds with the telecast's audio, which sounded as if the theatre were filled with its usual thousands of participants.

The closest thing to drama came with Swift's climactic appearance, winning for favourite artist, a particular surprise since viewers might have figured they wouldn't be seeing her – she did not perform and the other two awards she won were not presented on-camera.

Swift injected a hint of intrigue by saying she was too busy re-recording her old catalogue to attend the show, an unmistakably pointed aside coming less than a week after the superstar confirmed that her masters had again been sold against her wishes.

Swift, The Weeknd and Dan + Shay were not the only winners.

Picking up two apiece were BTS, Doja Cat, Bad Bunny, Nicki Minaj and Justin Bieber (sharing one of those with Dan + Shay). 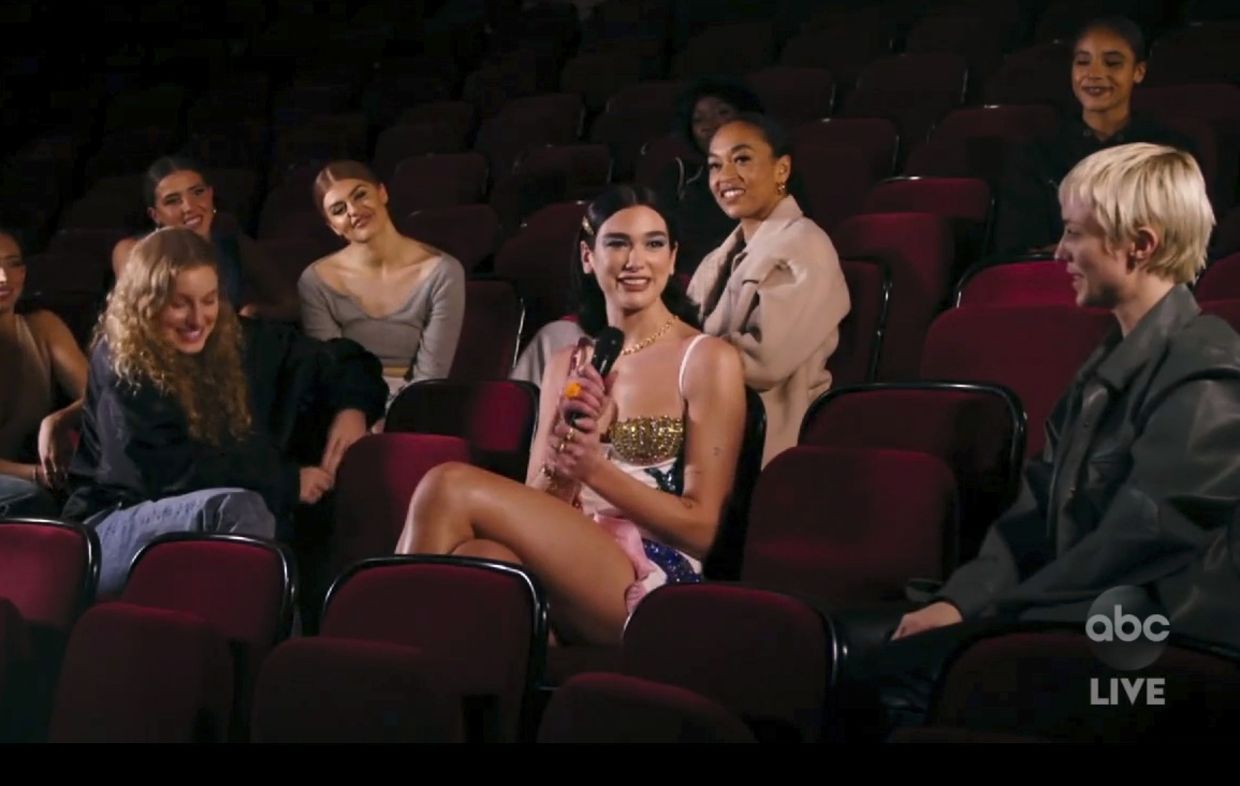 Although many of the performances were filmed on the Microsoft stage, either pre-taped or live, the two biggest highlights of the show were heavily choreographed, one-take numbers filed from a safe social distance.

The Weeknd strolled across an L.A. bridge – described as being a block away from the host theatre, but clearly much farther than that, with the downtown skyline a good distance away – for a fireworks-fuelled performance that had carefully executed pyrotechnics going off in traffic lines as well as high above in a 360º pan.

The other, also executed without any cuts, came in from England, with a smiling Dua Lipa joined by eight dancers in a facsimile of the Milky Way mentioned in the lyrics of Levitating.

The Weeknd appeared with his head nearly entirely covered in bandages not just for that number but for three separate acceptance speeches, as if compensating for the highly mainstream qualities of his most recent music with an even deeper dive into visual/character performance art.

There was nothing artsy about his turns at the dais, though, as he kept his talks short, if not almost shy, particularly offering thanks to Prince, because "he's the reason I get to constantly challenge this genre of R&B." 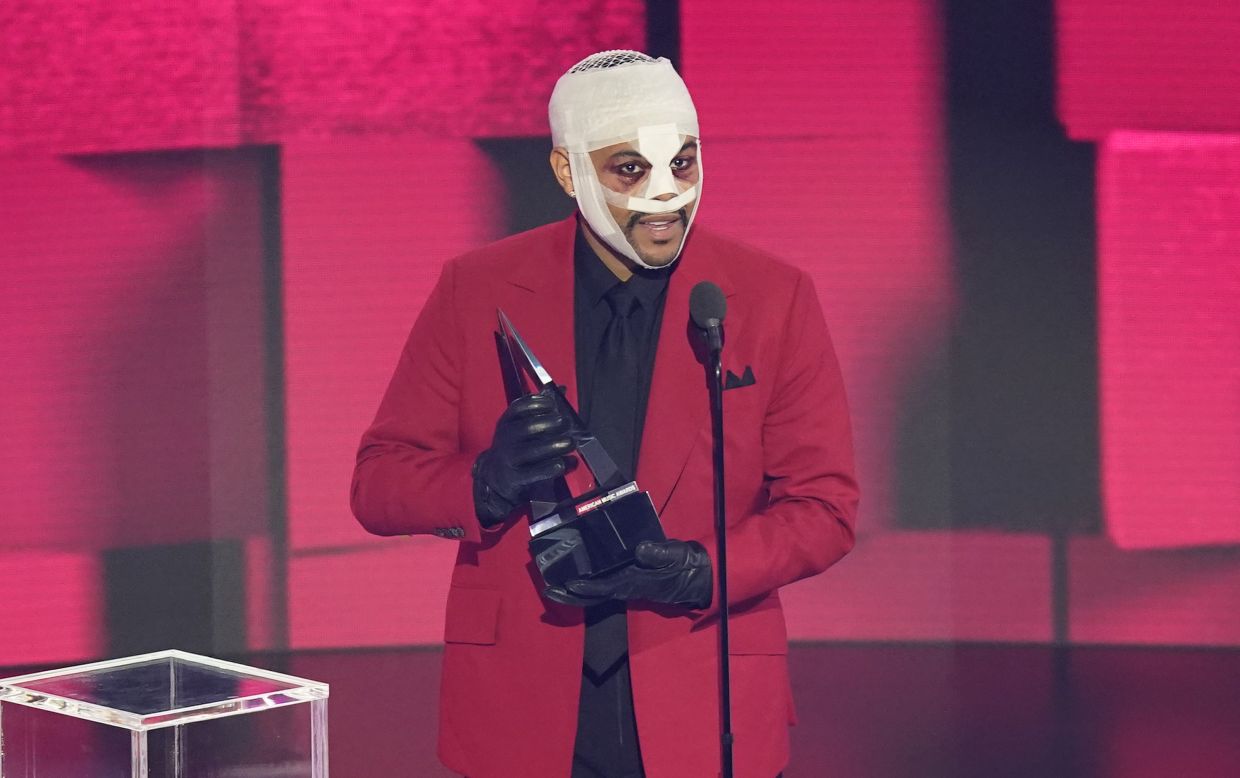 Although Kenny G's collaboration with The Weeknd was heavily anticipated, he appeared only in the opening moments of the reigning star's one-shot video, preceded by host Henson saying,"That sex is responsible for a lot of babies," laughing over her sex/sax stumble.

Henson gave her all despite being saddled with some questionable concepts and writing, like an opening dance medley that inserted her into several choreographed situations before she quit the bit as twerking took over ("This is family TV... Tell that dancer to teach me the twerk after the show" was the punchline), or a side trip into sketch comedy with Megan Thee Stallion in which she feigned having kidnapped the show's producers to take over Megan's career ("Women building up women by kidnapping people" being the kicker for that one).

While it wasn't always clear where the performances were taking place, due to not all of the songs having cutaways to what small audience there was, it was not long in doubt where Shawn Mendes was doing his cleverly staged Wonderful performance.

The number started on a living-room set, which was eventually revealed to have been constructed at the rear of the Microsoft Theatre's floor, as he exited out a side door and run up the aisle to join his band on stage.

There was less ingenuity to Mendes' earlier appearance on the show, a woe-is-us duet with Justin Bieber that opened the telecast. 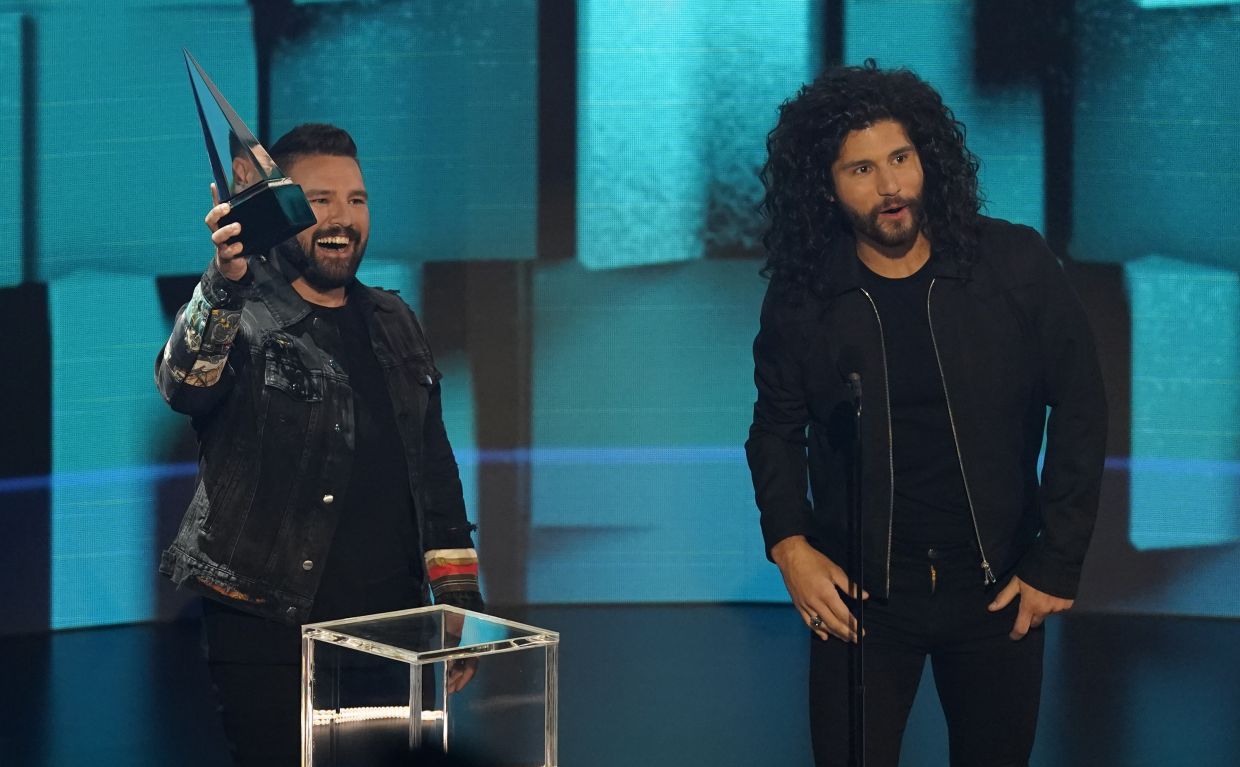 Shay Mooney (left) and Dan Smyers, of Dan + Shay, accept the award for collaboration of the year for '10,000 Hours. Photo: AP

Other performances included Machine Gun Kelly, introduced by surprisingly indifferent-seeming significant other Megan Fox; Billie Eilish, doing a live premiere of her new single on a darkroom-red set, with a surprise drop-off; Bell Bid DeVoe and Nelly, on hand for nostalgic purposes; recently most-streamed act 24kGoldn, balancing out that nostalgia with a song that the bulk of network viewers would still not have heard; Lewis Capaldi, offering what Henson called "an ugly cry" with the sombre Before You Go; Katy Perry and Darius Rucker quietly duetting on Only Love, a humanistic anthem from her recent record that the host described as being about "if you had one day left to live"; Jennifer Lopez and Maluma, assuring the show didn't descend too far into pathos with stripes strategically projected onto curves; further curviness squared times a hundred with Megan Thee Stallion's new Body; and Dan + Shay singing current hit I Should Probably Go To Bed, a surprisingly adventurous choice to program at 9:45 in an awards show.

Although the show could not be accused of undue topicality, Lil Baby may have gotten to the heart of 2020 by staging his song, Emotionally Scarred, as something sung to a therapist, and ending it with an on-screen message: "Protect Your Mental Health."

No one dared proffer a message about physical self-protection at the AMAs, but at least Lil Baby was out there reminding viewers it was OK to put on their emotional masks. – Reuters 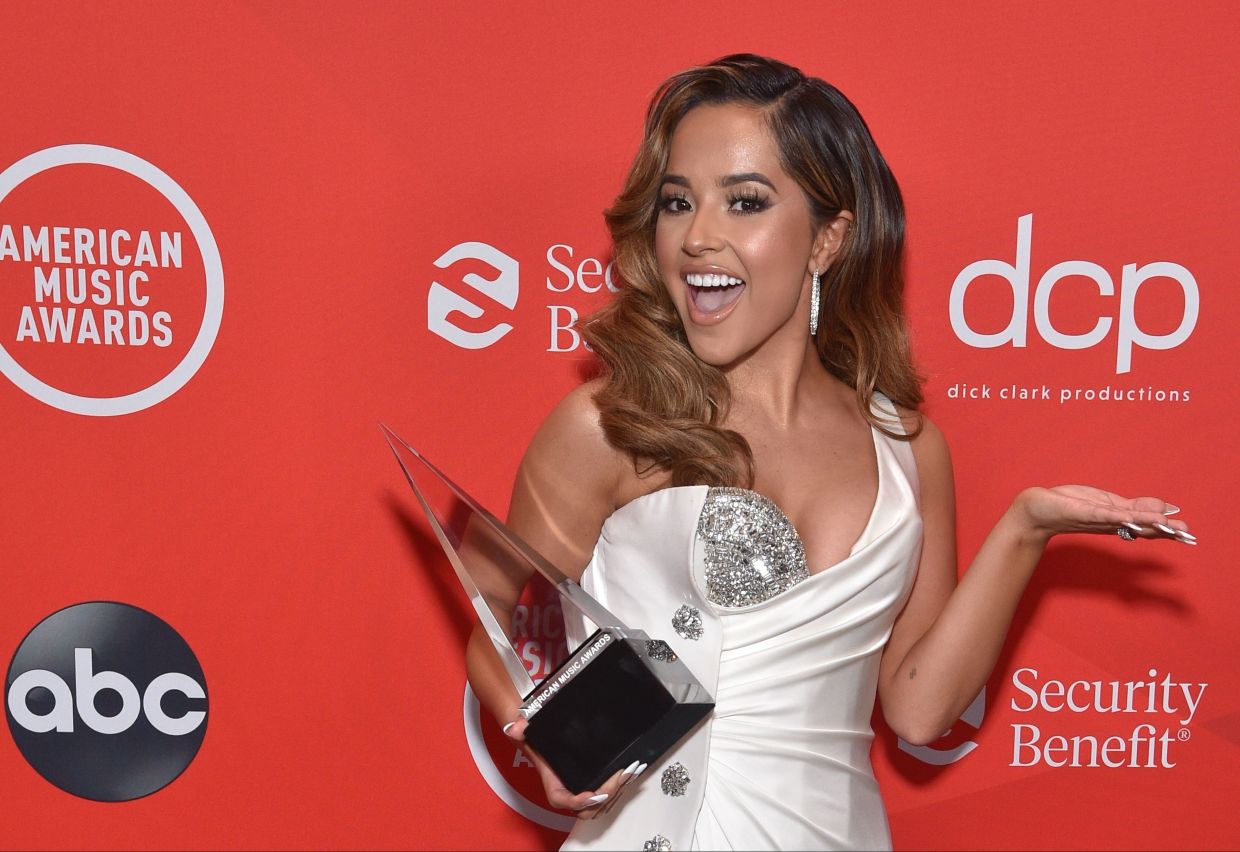