The film adaptation of the novel 'The Garden Of Evening Mists' is headlined by Malaysian actress Lee Sinje. Photo: Astro Shaw/HBO Asia

The second season of the drama The Bridge and the film The Garden Of Evening Mists, will be representing Malaysia in the Asian Academy Creative Awards (AAA) in Singapore in December.

Both local productions, recipients of the Film In Malaysia Incentive (FIMI), were announced as selections to compete with entries from other Asia Pacific countries such as Australia, India, Indonesia and Japan.

The AAA, which is aimed at recognising outstanding works in the creative content industry, would be announcing the winners of its contested categories during the Grand Awards and Gala Final, scheduled for Dec 3 and 4.

FIMI is an initiative under National Film Development Corporation (Finas) that provides a financial incentive of 30% cash rebate for creative content production in the country. 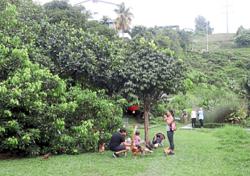