'I can run freely': Malaysian blind footballers on how sport has liberated them

Two members of the Malaysian blind football team talk about how playing the sport has given them a new lease of life, and also about the upcoming documentary feature film, 'Eye On The Ball'.

From afar, Rollen Marakim and Asri Arshad look like two ordinary footballers having a kickabout on the field. Get closer, however, and you’ll find out that they are hardly ordinary, but rather, quite extraordinary.

The first thing you notice is the rattling sound coming from the soccer balls they passed it back and forth. The blindfolds they wear over their eyes is another indication that these are not normal footballers.

Rollen and Asri are members of the Malaysian blind football team, the subjects of the upcoming documentary feature film, Eye On The Ball, which makes its exclusive premiere on Astro First today (Aug 20).

Eye On The Ball, which is produced by Star Media Group’s R.AGE team, follows the Malaysian blind football team as they, emboldened by their victory at the 2015 Asean Para Games, attempt to qualify for the World Cup of blind football. Rollen (right) and Asri are members of the Malaysian blind football team.

Despite their visual impairment, there was a sense of exhilaration and freedom in the way they played, the ringing of the ball aiding them as they dribbled and passed to one another.

Rollen, who has been blind since birth, said he only needs to know where three things are during a game: the coach, the goal guide and the goalkeeper. 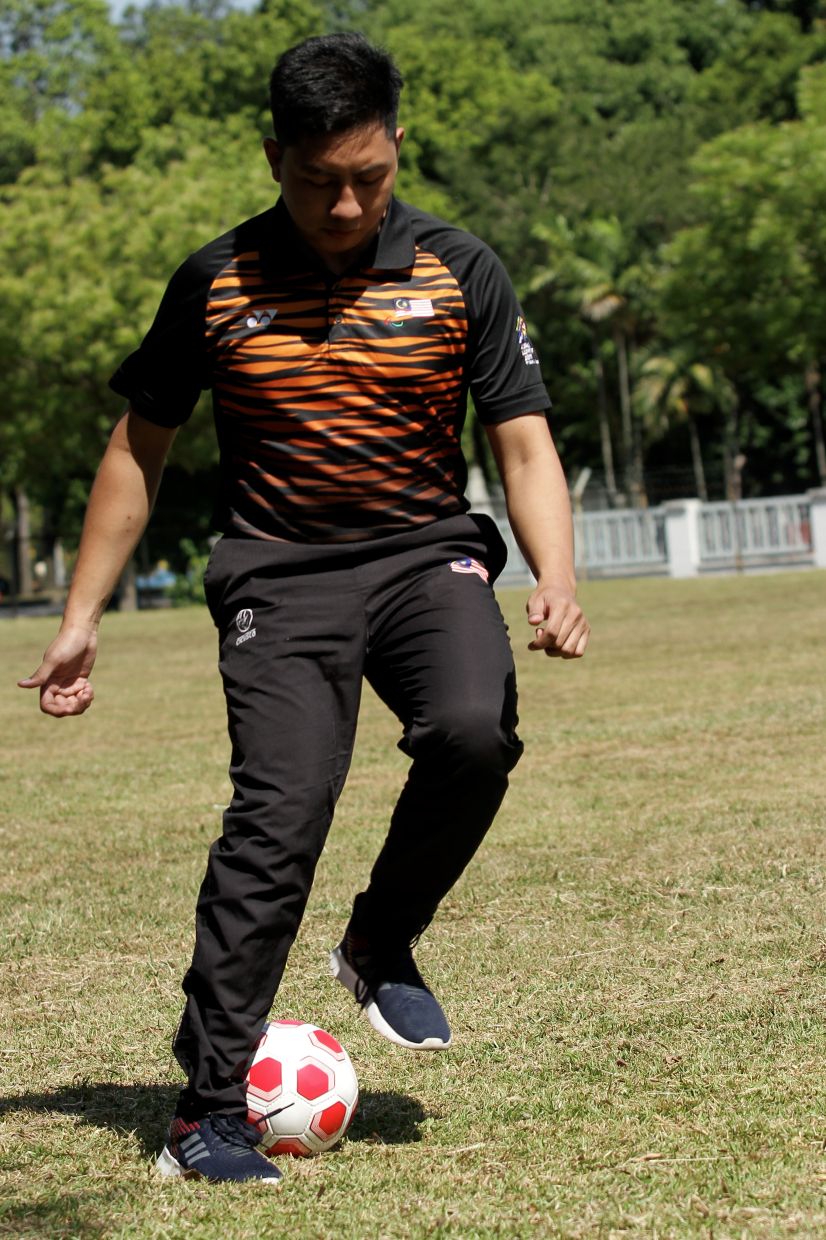 Asri had complete faith in the crew members’ professionalism throughout the shoot.In fact, just by locating one of them, he can estimate his speed and direction, where he can pass the ball or even score a goal.

Rollen and Asri are two of the members of the team who are the focal points of director Chen Yih Wen’s film.

Although it was their first time being filmed, the players were largely unbothered by the presence of the crew members and filming equipment during the shoot.

In fact, Rollen found the filming process quite casual and relaxing, since he was told to ignore the crowd and play as usual.

“There is not much difference between playing for an actual game or during the filming, ” said the 30-year-old, who works as a hospital telephone operator.

“Our dialogues were spontaneous and no acting was involved, I felt normal even though I knew I was being filmed.”

Asri had complete faith in the crew members’ professionalism throughout the shoot.

“They did not tell us what to do or how to act. Sometimes I don't even know where the cameras are during our training, ” he said.

The 25-year-old UiTM student said that he was at first apprehensive about his personal story going on the big screen, but soon came to see it as an opportunity to spread more awareness about his disability and sport.

“The documentary has provided me the chance to think of my past that I once thought was painful. It is not so bad now. It is an honour for me to share my story as I learned a valuable lesson from it, ” the 30-year-old said.

He also adds that the football field is one of the few places where he feels a sense of freedom and liberation. 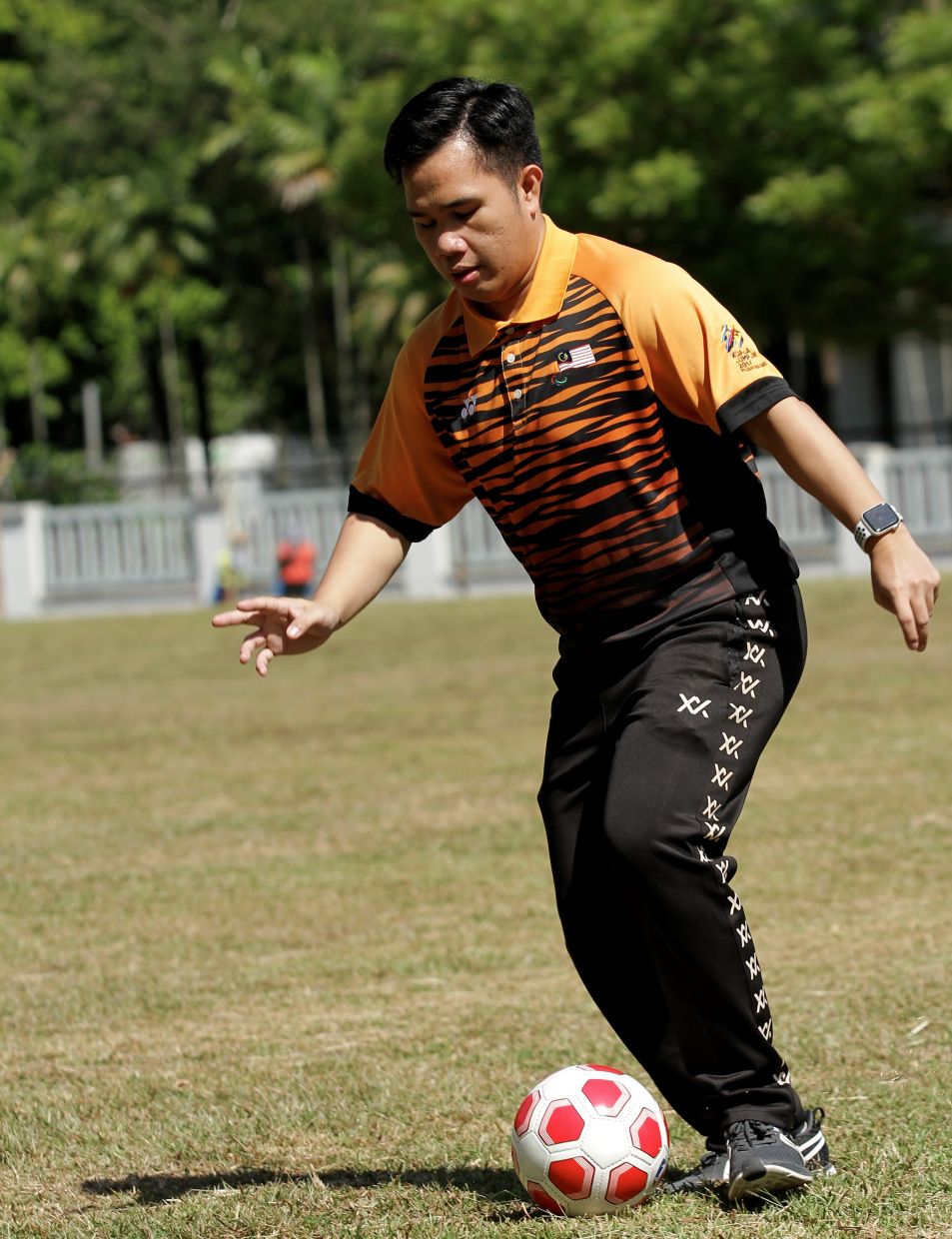 Rollen found the filming process quite casual and relaxing.“Being blind, we do not have the courage to run around and we are constantly worried about tripping. But in the field, the open space is what we are familiar with, it is a gratifying moment for us to play sports like a normal individual.” Asri said.

Rollen was honest with his disability and hopes that he can contribute back to society.

“Don’t be ashamed of it but give yourself a chance to figure out your capability and present yourself to the world.”

Asri concurred, adding that what people who are visually-impaired need is not sympathy but support from others to find their worth.

“Encourage them to try and even if they fail, tell them that you’ve got their back. That way, they will gain confidence and strength because they know they can do it, and they will.” Asri said.

Eye On The Ball makes its exclusive premiere on Astro First today (Aug 20). It is presented by R.AGE, Star Media Group and CIMB Foundation, one of the earliest supporters of the local blind football community.

R.AGE, alongside CIMB Foundation, hopes to raise support through the film for the blind football community, specifically the Pan-Disability Football Club, so that it can continue its work of empowering lives through football. For more information, and to donate to the Pan-Disability Football Club, go to eyeontheballfilm.com.
Article type: metered
User Type: anonymous web
User Status:
Campaign ID: 1
Cxense type: free
User access status: 3

Film on Malaysian blind footballers is ready for kick-off tomorrow

Astro First to air ‘Eye On The Ball’ next Thursday