‘Right, we will have to work out bathroom privileges. I suggest the Great Leader goes first, then President Han, and finally POTUS. Because I saw what he ate for dinner.’

One of the good things about the 2017 South Korean thriller Steel Rain was watching its stars Jung Woo-sung (as a taciturn, committed North Korean soldier) and Kwak Do-won (as a shrewd but seemingly freewheeling South Korean government official) bond over skinny noodles, fat jokes and K-pop superstar G-Dragon.

Their chemistry as unlikely buddies helped lift the film over some of its formulaic (sometimes tedious) action and violence, and gave a human face to Steel Rain’s tale of the two Koreas brought to the brink of war.

Jung and Kwak are back in this follow-up, which is not a direct sequel but shares the original’s themes of war and peace against the backdrop of the region’s complicated geopolitics.

It expands the original’s world-view to take in the Japanese, Chinese and American stakes in tensions on the peninsula and its surrounding areas, occasionally bearing distinct similarities to ongoing issues while acknowledging history.

The sad thing is, the Jung-Kwak dynamic is not in evidence here. They have been recast on different sides now, with Jung playing South Korean President Han and Kwak playing a North Korean military hardliner, eponymously named Kwak once again (like his character in Steel Rain).

With much of the film revolving around Han’s attempt to broker peace between his North Korean counterpart (Yoo Yeon-seok) and US President Smoot (Angus Macfadyen), Jung and Kwak have precious little screen time together. 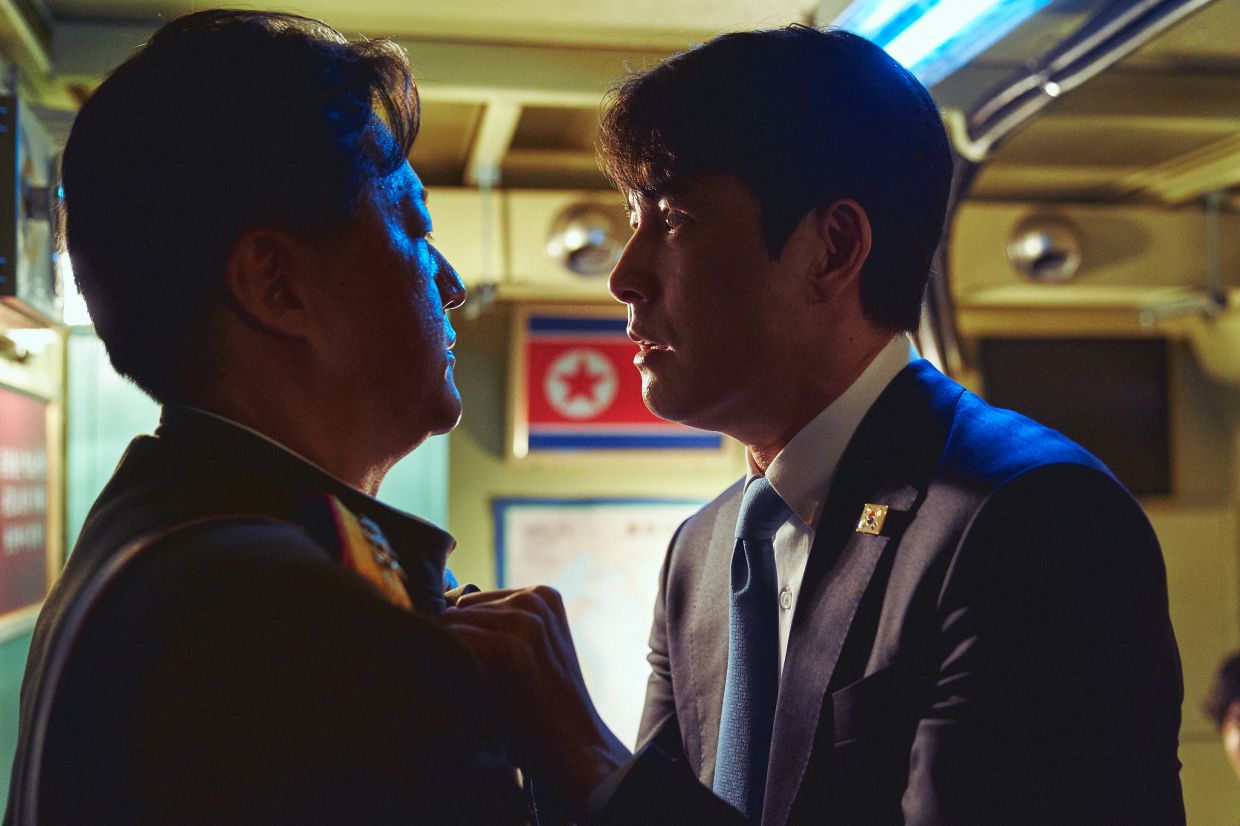 ‘Have you lost your moral compass, man? Or maybe it’s the director who lost his compass … because the last time we met, I was the guy from the North.’

We have to be content, then, with the dynamic of the three national leaders after things go horribly wrong during a peace summit.

Writer-director Yang Woo-suk has often stated his ideas about what is needed to bring about peace on the peninsula, and it involves not just the two Koreas but also the parties that play them against one another.

To his credit, he manages to make these discussions and arguments among the three as interesting as the undersea action (most of the finale is set aboard a nuclear submarine).

At least, some of the time. 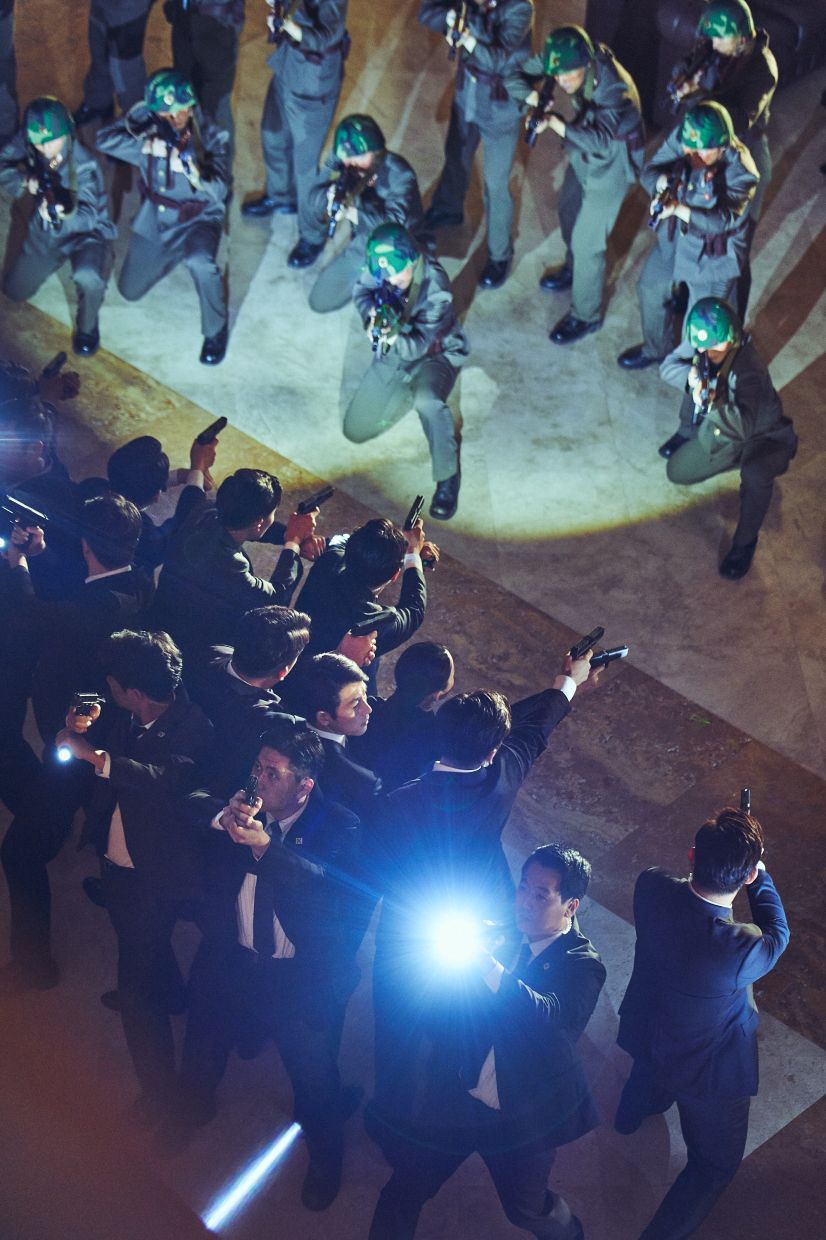 Finally, the rivalry between the Suit and Uniform branches boiled over into open confrontation.At other times, it almost feels like we’re students in one of the historical lectures Yang likes to put in these movies.

And then again, at others, the interaction of the leaders descends into what can only be termed tripartite tripe.

A lot of this has to do with Macfadyen’s kooky portrayal of the oddly named President Smoot (one can only imagine his campaign slogans, and his rivals’ put-downs).

It smacks strongly of a POTUS we are quite familiar with, and watching Robert The Bruce (possibly) channel The D*n*ld is both creepy and amusing – at least, it’s funny in unintentional ways but not when the humour is intended.

Love it or hate it, you won’t be able to look away, and I have to hand it to Jung, Kwak, Yoo and their co-stars for keeping it together in the face of such unrestrained scenery chewing.

You will also need to pay close attention from the get-go to keep track of who’s who in this complicated game of nations.

But when it matters most, Yang exerts (regains?) sufficient control over his plot and subject so that the stakes and targets are clear to the viewer as we close in on the climax.

He also keeps a tighter rein on the bloodletting here, and I found that to actually be a plus point for this follow-up.

In terms of scope, Steel Rain: Summit is also much more ambitious in what it tries to say and cover in its 130-plus minutes.

In trying to make so many statements, and cramming in so many characters, though, it ultimately sacrifices depth – of story and characterisation – and becomes entertainment that just skims the surface of its complicated topic, issues and players.

While it may differ considerably from its predecessor, this one also delivers a generally good time, but comes up just short of being great.