The 59-year-old actor flashing his wedding band in a screenshot from Late Night With Seth Meyers.

You may have heard that actor Sean Penn got married recently but you may not have heard how he did it.

She is the daughter of actors Vincent D'Onofrio and Greta Scacchi and had a supporting role on 2018 film Mortal Engines.

He let us in on the details of the wedding on Late Night With Seth Meyers:

"We did a Covid wedding. By that, I mean it was a county commissioner on Zoom and we were at the house with my two children and her brother, and we did it that way."

Host Meyers added: "Having had a very large wedding, that sounded very nice and low-stress." 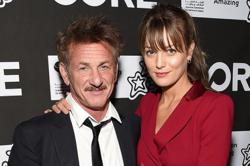 Niezam on why wedding with Nonny was cancelled