Look back at 'Clueless', the 1995 rom-com starring Alicia Silverstone that has achieved classic status

Shockingly many producers and executives passed on the story of a girl named Cher. Photos: Filepics

It's hard to believe it, but Clueless, the seminal comedy that perfectly captured teenage life, has just turned 25, making it several years removed from high school graduation.

In the subsequent two and a half decades, Clueless has achieved near classic status, but writer and director Amy Heckerling still remembers the many times producers and executives passed on the story of a girl named Cher. The film was initially in development at Fox before it was put in a turnaround.

"Everybody in Hollywood passed on it, and my agent Ken Stovitz was just driving himself insane trying to think of places and things and people that he could get it to and who would read it," Heckerling tells Variety.

"And, you know, it was pretty much, 'No no no no.' It's kind of like when you read it, I don't think people understood the humour."

Stovitz recalls the struggle of finding Clueless, originally written as a scripted TV series, a home.

"One of the hardest things to ever arrive at in Hollywood is the truth of why someone rejects you... I mean, we got rejected everywhere twice," Stovitz recalls.

The film ultimately landed at Paramount, with Scott Rudin, then flush from the success of The Firm and The Addams Family, signed on as producer.

Clueless is a 1995 adaptation of Jane Austen's 1815 novel Emma. But it's also a patchwork of Heckerling's own experiences writing and directing films, as well as the culture shock of coming to Los Angeles as a native New Yorker.

In one early scene, Cher (Alicia Silverstone) and Dionne (Stacey Dash) chat with each other on their cells, continuing the conversation via phone until they're walking side-by-side. This funny scene in 'Clueless' was something Heckerling observed in Hollywood.The exchange was inspired by an observation Heckerling made about two producers talking to one another while she was working on Look Who's Talking.

"Of course, they had these big hunking cellphones, right? But nobody else was walking around with cell phones. I think in Europe, maybe people were using them more than (in) America, and drug dealers and s**t," she says.

"The producer was pacing back and forth across the field from where I was shooting babies, and he was yammering on his phone. And the other producer was, like, half a field away from him walking back and forth on his cell phone. Me and the (director of photography) were talking, and he goes, 'Who do you think they're talking to?' We go, 'Each other.'

"I mean, theoretically, they could have walked a few yards over to each other and talked. But it just cracks me up to think, 'OK, so, now this is how we'll all talk to each other.'"

In another, Murray (Donald Faison), Cher and Dionne unwittingly end up on the freeway, with Dionne at the wheel, an ordeal inspired by Heckerling's own aversion to driving.

She failed her driver's test five times and has had a fear of being hit ever since she collided with a drunk driver shortly after finishing up her student film at the American Film Institute in Los Angeles. 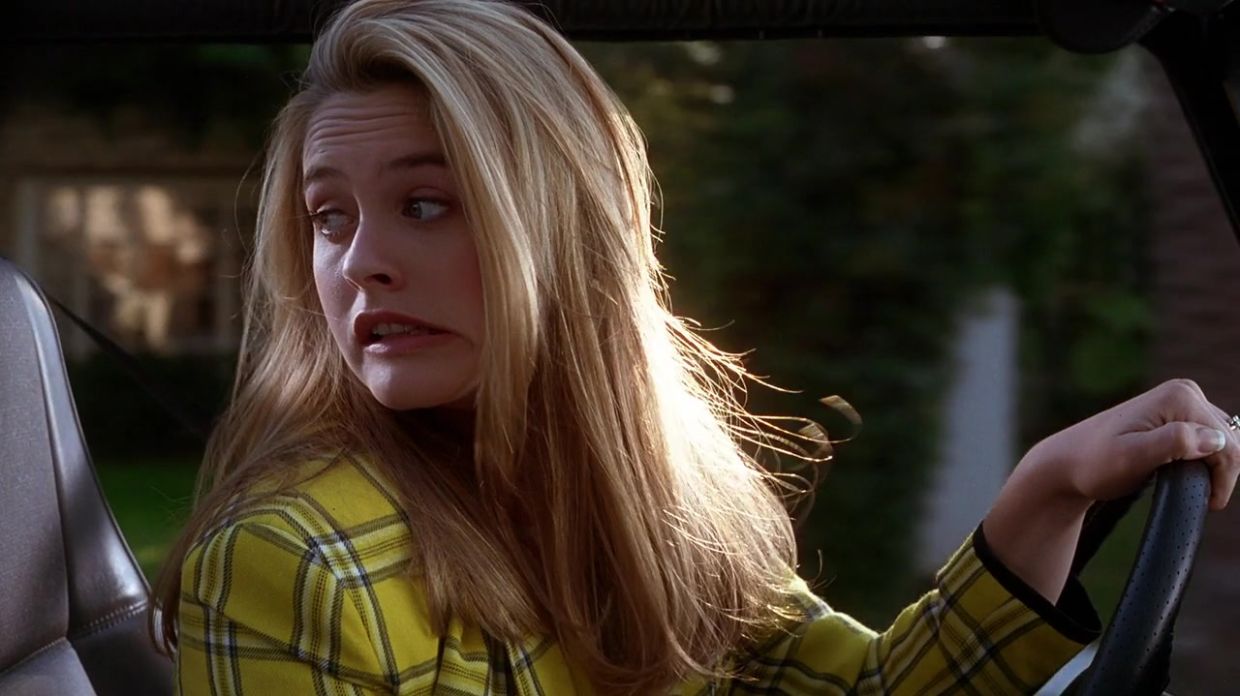 Cher's bad driving is not that different to Heckerling's who has a fear of driving."So, every now and then you're trying to find an address to find how to get somewhere, and suddenly, you find yourself in the lane you can't get out of that leads into the freeway," says Heckerling. "And when that happens, I just scream until I get off of it."

"School would start, and when fall starts is when people come out to go on trips to see the fall leaves. "We call them foliage trips on the east coast because there were certain roads and things you could take, and you would see brilliant yellow trees and oranges and reds," she says.

"So, I wanted that kind of back-to-school, 'the leaves are on fire' kind of beautiful look for fall."

When Clueless opened in the summer of 1995, it became a generational smash, earning US$56.6mil on a paltry US$12mil budget. All those studios who passed on the film must have choked on those grosses.

"I go, 'Really? A yellow suit?'" Heckerling recalls. "I was like, 'OK, I've got to trust you on this because it's gonna pop.'" – Audrey Cleo Yap/Reuters Here's an art subscription service fit for the Hollywood stars