For a contemporary city dweller like Yise Loo, issues about something as distant as the rainforest couldn’t be further from her mind.

As a prolific singer-actress who hosts TV shows (The Special Cuisine, 2010), and acts and sings the theme songs in local Mandarin dramas (The Beat, 2012) and movies (Fantasia, 2014), Loo started on the showbiz path by entering a singing competition at the age of 13 and as such had spent most of her time in recording studios, drama sets, and concert stages.

Yet, a rural adventure during a TV shoot got the Malaysian singer-songwriter to start appreciating the importance of sustaining a healthy rainforest along with its diverse wildlife inhabitants, in more ways than she expected.

The soft-spoken Loo revealed that even getting a good night’s sleep was a luxury as she was kept up at night by the freezing cold jungle air and an unending cacophony of wildlife sounds.

Then, she realised that the indigenous villagers had it worse as they had to get up in the middle of the night to chase away wild animals that threatened to destroy their plantations.

Loo, 37, was thus inspired to express her thoughts in the form of a new song titled The Tree, also known as Da Shu in Mandarin.

She wrote the song after participating in the shooting of one episode of an Astro documentary series titled Social Playlist, which focused on excessive logging issues.

The four-day shoot in Kelantan presented an opportunity for the Johor-born singer to learn about the many challenges of life in the outback.

“It was an unforgettable trip, as I got to do things that I’d never tried before. From Gua Musang town, we went into the village where the Orang Asli (indigenous tribe) lived deep in the jungle. That took us about seven hours.

“We were travelling by jeep, so it was an extremely bumpy journey.”

As a constantly-connected cosmopolitan, Loo was surprised to discover that there was neither electricity nor Wi-Fi at the village that she visited.

“We never knew that in this civilised country, there were still so many people living deep inside the jungle with such limited resources, ” she said.

The cast and crew had to stay overnight at the jungle, in a house she described as “built out of leaves”.

“It is something like an attap house, but with no doors; so, we can hear all sorts of wild animal sounds. It was quite an adventurous outing. And luckily, we brought our own sleeping bags. It’s very cold in the jungle at night, ” shared Loo.

“One day the pengetua (village head) brought us into the jungle to see the issues caused by excessive logging, that resulted in wild creatures destroying the Orang Asli’s plantations.

“The poor animals had already lost their homes, which were in the forest that had been destroyed earlier. So, the elephants had to resort to searching for food in the village.

“It is hard for us to imagine life like that, but the villagers had to wake up in the middle of the night, in order to chase the elephants away from their house. That may sound ridiculous to us, but it’s something that happens to them so often.”

Loo also described another nerve-racking incident where the cast and crew lost their way while returning to the village.

“It was raining heavily, and the whole area was engulfed in floods of muddy water from the river nearby. We were trapped inside the jeep, so the driver just told us to wait until the flood water subsided.” Witnessing the dilemma of city development first hand, Loo lamented: “To develop our country, forest reclamation is necessary. However, doing so would also destroy the homes of the Orang Asli and that of a lot of wild creatures.

“The issue of excessive logging is one of the main causes of global warming. If you asked me to use one word to describe the trip, I’d say ‘dilemma’, ” Loo continued.

She managed to rope in a friend to help out on her new song, The Tree.

“This time, I invited my Orang Asli musician friend Evan Lee to collaborate in the song. He sang in Iban language and played the sape (traditional lute of Orang Ulu) in the song.”

In keeping with the spirit of World Rainforest Day (June 22), Loo has this message: “I hope this song can create awareness of this issue of disappearing rainforests in our country, and also encourage more people to adopt an eco-friendly lifestyle.” 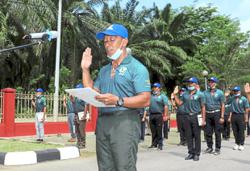 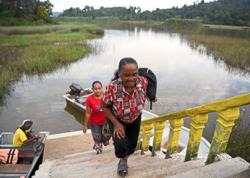