‘I see a bright future for you... so bright, you will move to Miami and hang out with a guy who likes to wear shades.’

There is a spellbinding moment in the most recent episode of new supernatural series Penny Dreadful: City Of Angels when Nathan Lane’s grizzled veteran LAPD detective Lewis Michener spins a huge yet convincing load of horse manure to get a murder suspect – obviously not a killer – to admit to five horrible slayings.

It is a marvellously acted, scripted and shot scene, in an episode that mostly revolves around the interrogation of that suspect and the leverage he holds over Michener’s partner Tiago Vega (Daniel Zovato).

Yet, for all the bravura of that sequence, it is just one of precious few highlights in a show that has been mostly uneven, with long stretches where entire story threads get submerged.

It certainly does not sound much like the original 2014-2016 Penny Dreadful, which combined popular characters out of literature and British pulp fiction to mesmerising effect from the get-go.

It has supernatural aspects, sure. Showrunner John Logan is at the helm again. Even Rory Kinnear, who played Frankenstein’s monster previously, is back – although in a very different role.

‘No, I called dibs on the handsome detective first.’

Yet City Of Angels is set in: a) 1938, a much different era than Penny Dreadful, which at least shared a time period with the sensational, cheap 19th-century periodicals from which it took its name; and b) Los Angeles, a whole continent away from the penny dreadfuls’ home turf of England.

If anything, this new show has more DNA in common with American Horror Story. But that’s a whole other studio and cable network. And possibly, attaching the more American prefix of “dime novel” to City Of Angels just wouldn’t have the same kind of name recognition.

(Also, just calling it City Of Angels might see a lot of hopeful Nic Cage and Meg Ryan fans tuning in – and out.)

Six episodes in, I’m still not convinced this show belongs under the Penny Dreadful umbrella, though it does have its merits.

In addition to an evocative recreation of the setting – not just in look and atmosphere but the various underlying tensions as the city deals with burgeoning development, racial troubles and the gathering storm of World War II – it also boasts some fine performances capped by a multifaceted showing from star Natalie Dormer.

Primarily, she plays Magda, a slinky leather-clad demon that delights in spreading discord and adopts a range of other identities to further her designs.

She is also: political aide Alex Malone, who gets her boss, city councilman Charlton Townsend (Michael Gladis), in bed with Nazi infiltrators; and Rio, a fiery revolutionary and Latin gang leader urging her “countrymen” towards open confrontation with the police. ‘It’s amazing. I didn’t know demonic constructs could have a heartbeat.’

To say Dormer is the face of the show would not be overstating it, but while she is splendid in her firebrand roles, others (like Elsa) seem a little contrived and obvious. Oh, Caliban, if you only knew how clearly we know you’re being played.

Then we have Vega, the LAPD’s first Mexican-American detective, who suffers the scorn of both his fellow officers and community. His partner Michener is no stranger to prejudice either – he is Jewish. Oh, and after work hours, he gets together with his pals and spies on operatives of the Third Reich who have infiltrated America.

It is a given that Magda has nasty intentions for the city (and, in the first episode where she converses with her sister Santa Muerte, the Angel of Death, for humanity itself).

The first episode gets off to a fiery start as Magda lays waste to a plantation and many of its Mexican workers, ending with Santa Muerte (Lorenza Izzo) marking a young Tiago with the imprint of her palm burned into his chest.

On to 1938, with Tiago and Michener ordered to investigate the gruesome murder of a rich white family, suspicion for which has fallen upon the Mexican immigrant community.

The episode ends with a gorgeously shot scene of Magda and her sister facing off while a violent confrontation rages in the background. Promising indeed, but a feeling that soon fades with subsequent episodes. After she was done with Los Angeles, Magda’s next stop on her vengeance tour would be King’s Landing.

City Of Angels stumbles in holding our attention by delving into far too many of its human characters’ intentions – and having way too many of them to begin with.

Juggling multiple story threads that include a religious cult and its charismatic figurehead who falls for Tiago, the Nazis’ plans for LA, Lewis’s moonlighting, Tiago’s own family and community troubles, Dr Craft’s marital troubles and seeming earnestness in wanting the United States to stay out of the war –that is where any sense of an overarching story gets lost.

The horrifying quadruple murder, for example, drops out of sight too often as the detectives get sidetracked with their own problems.

After six episodes, it is clear that the show aims to hold a dark mirror up to contemporary issues – even more so now, with the ongoing George Floyd protests.

It takes a better approach to this than, say, Star Trek: Picard, however; and its characters’ struggles with issues of identity versus perception/prejudice also make compelling viewing at times.

Still, with no clue where all this is headed, one can’t help but feel that Logan and company are simply running in place while trying to cover too much ground. 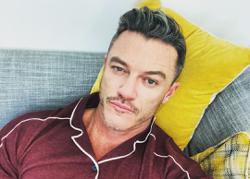 Actor Luke Evans on strict filming rules: 'I have to be tested every other day'