Convenience stores are located at almost every corner of Seoul, South Korea. Inside the small stores, stories of the most ordinary yet extraordinary everyday life take place.

According to the series’ producer Lee Myung-woo, the drama is a jumble of romance and comedy, topped with heartwarming stories of family and friends.

“The keyword I had in mind when I planned it was ‘warmth.’ I expect everyone will be feeling some kind of frustration inside their heart with the worsening economy and ongoing virus situation. I’m hoping they could laugh away the hour with this drama, ” Lee said during a promotional event about the drama recently.

Kim, 22, says her character Saet-byul is one of the fiercest characters she has taken up.

“Saet-byul is a loyal character who would do anything to protect the people she cares about and would willingly throw herself to fight for them, ” the actress said, adding Saet-byul gets involved in physical fights as well. While her role inevitably requires action scenes, the director explained that Kim carried out most of them without a stunt double.

On the other hand, Dae-hyun is a “stingy” manager, who is a seemingly ordinary and realistic person, working hard to operate the store with his family.

“Although the drama does not have a dramatic storyline or spectacular episodes, the warmth (in the stories of) the convenience store really moved my heart, ” the 32-year-old actor said.

Meanwhile, the director explained the new television series deviates much from the original web-comic series, which had come under fire for several suggestive and sensational scenes inappropriate for a family drama. The webcomic series – of the same Korean title – was released in 2016 on the webtoon platform Toptoon.

“I made a scene about a convenience store in my previous series The Fiery Priest, and I thought then that it would be interesting to make a drama about all the things taking place inside the convenience store, ” the director said, adding, “While taking the strength and the positive energy of the two lead characters in the original comic, we made a program that families can watch together.” – The Korea Herald/Asia News Network

Backstreet Rookie airs every Saturday and Sunday at 9.45pm on One (Astro Ch 393). 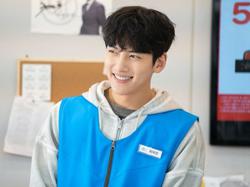