‘The Gentlemen’: A crammed but crowd-pleasing crime saga

‘I have to say, I’ve never seen a director’s story notes fill an entire car boot before.’

For more than a decade, he has been “re-imagining” stuff – Sherlock Holmes, King Arthur, The Man From U.N.C.L.E. and Aladdin.

Now, Brit filmmaker Guy Ritchie quite triumphantly returns to the genre that made his rep: the hard-boiled crime drama with a rather high quotient of cool and/or funny bits.

Like another famous Richie (no “T”, since Lionel’s not British), Ritchie has us dancing on the ceiling as we navigate one swerve and narrative sideswipe after another in this packed but crowd-pleasing gangster romp.

We do it all to the beat of an appropriately cool soundtrack (complete with hip-hop music video) and rapid-fire dialogue that keeps the tempo going when the music takes a break.

Here’s the setup: the marijuana lord of England, a Yank named Mike Pearson (Matthew McConaughey), wants to sell his empire so he can spend some quality time with the Missus, Rosalind (Michelle Dockery) – a pretty tough cookie herself.

As Pearson courts a prospective buyer, a hungry rival starts circling the deal with a hostile takeover in mind.

After getting our attention right at the start with an apparent assassination, Ritchie (who also wrote the screenplay) turns his film into a narrative within a narrative.

And who better to narrate than Hugh Grant, in a decidedly un-Hugh-Grant-ish turn as a shady private investigator named Fletcher, who has dug up a substantial amount of dirt on Pearson.

His attempt to convince Pearson’s consigliere Ray (Charlie Hunnam) that his leverage is worth a ton of money makes up the bulk of The Gentlemen’s running time, and it’s a spellbindingly orchestrated tale – complete with some of those sharp turns and hard bumps mentioned earlier.

Like Arthur Fleck in Joker, Fletcher is not exactly a reliable narrator, embellishing his tale with flourishes and fiction that keep us constantly wondering how much of this is true (within the story’s context, of course) and how much is pure horse dung. 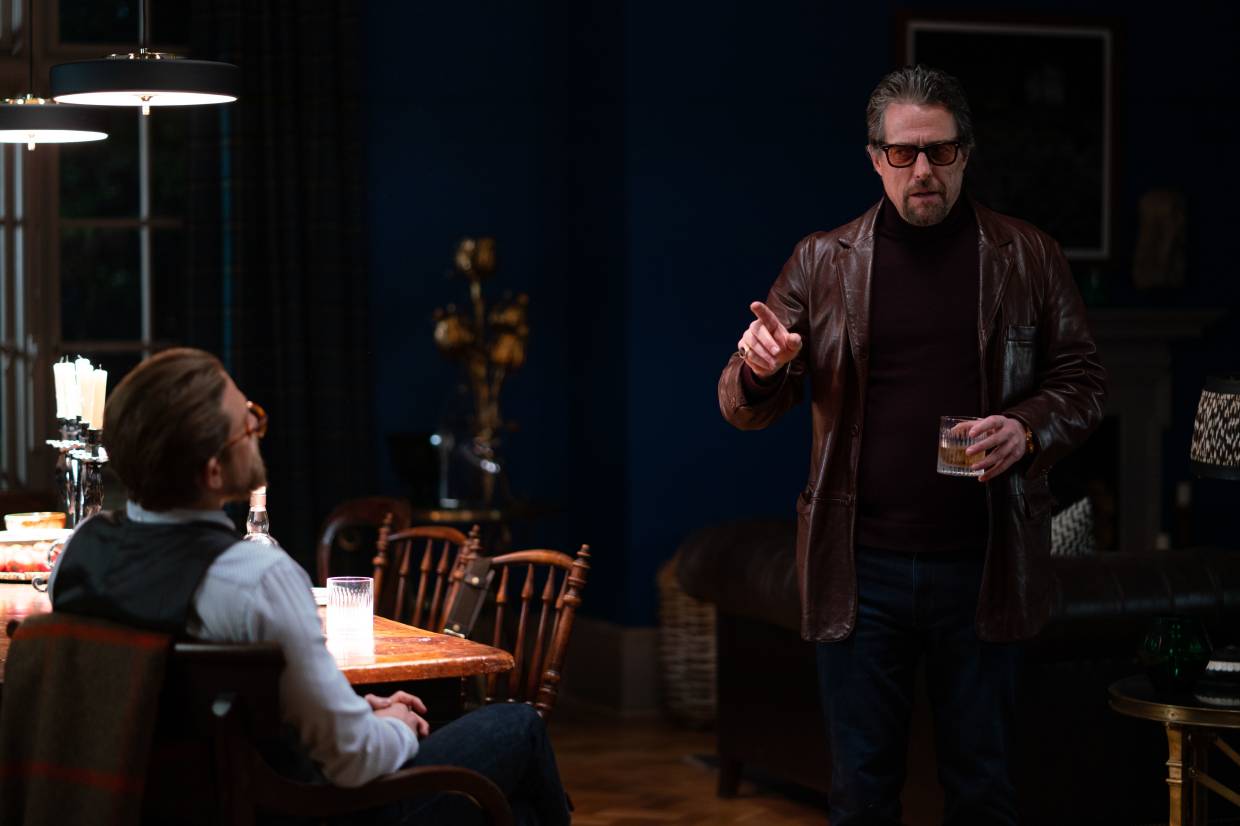 ‘Today’s lesson is brought to you by the letters A, C and F, all delicious expletives that this film is just overflowing with.’

While McConaughey, Dockery and Hunnam play their roles in an essentially straightforward manner, Grant is clearly having a field day with all this verbal prancing about, and it’s infectious.

Similarly, Henry Golding as vicious gangster Dry Eye (they have drops for that, doesn’t he know) offers a fun showing as he marches to the beat of more than one drummer here. Not just to Ritchie’s cadence but Fletcher’s as well, who gives him a “Say hello to my leetle friend” moment and several other, well, extrapolated and exaggerated behaviours in the course of his twisted tale.

And just when you figure The Gentlemen has finished familiarising us with its broad cast of characters, along comes Colin Farrell as Coach, a multiskilled individual whose role here seems to adapt itself to whatever Ritchie’s screenplay needs him to be at a given time (to the extent of giving one unsavoury journalist his very own Black Mirror moment).

In the hands of a filmmaker less adept at juggling so many variations on a theme, Coach would ring out loudly like the hollow contrivance he is.

Yet Ritchie and Farrell make him a welcome addition to the proceedings, particularly since he is clearly not part of Fletcher’s tale (and therefore, an unknown quantity who adds to the overall unpredictability of the story’s direction).

A recurring theme in the movie seems to be the headlong clash between seasoned old-timers and hungry young up-and-comers. 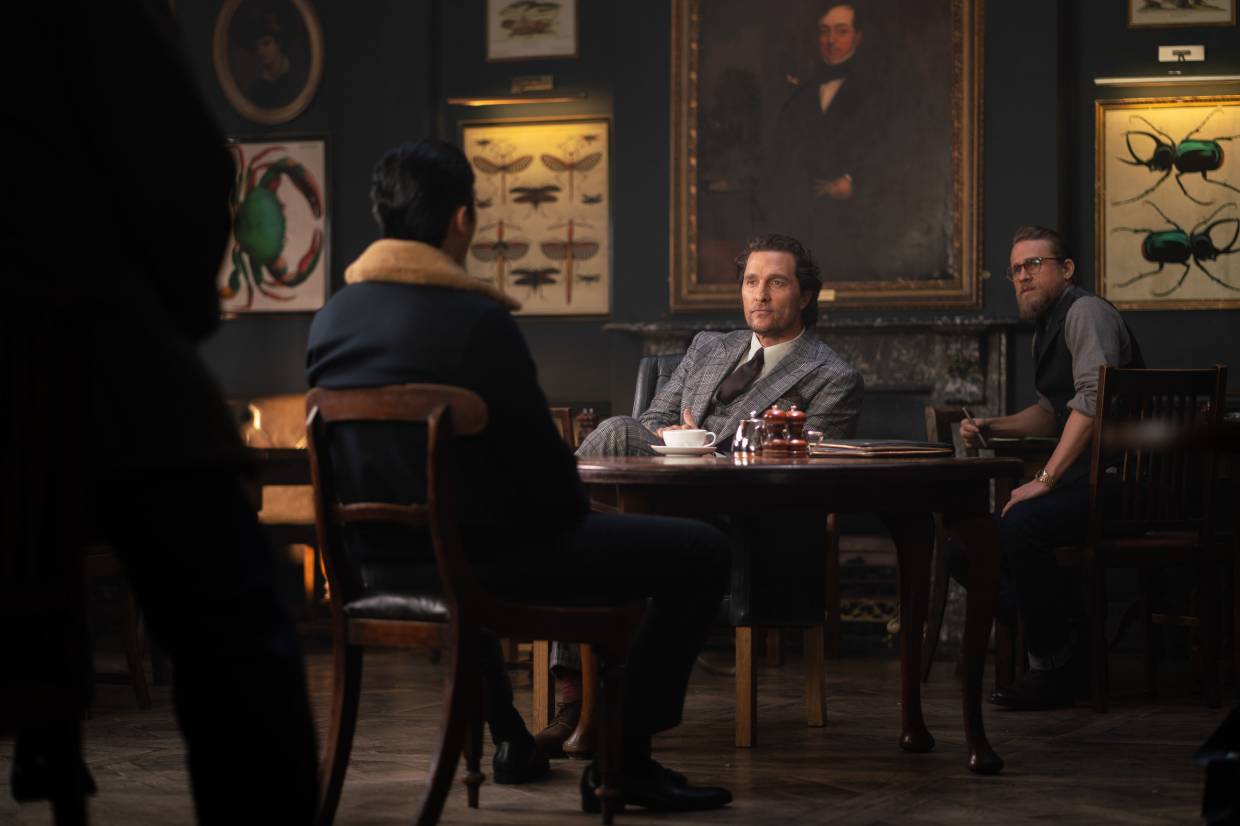 ‘Don’t take this the wrong way, lad, but I find it hard to take seriously a criminal calling himself Dry Eye. They have drops for that, y’know.’

Yes, it’s the old “don’t reach for it till you’ve earned the right” chestnut again, and here it looks like Ritchie – an “old” hand at the gangster movie game – is calling out all the Johnny-come-lately claimants to his modest throne.

Where the youngsters in this film may sometimes gain the upper hand through sheer bravado, it’s the oldsters who prevail through clever use of their experience and wisdom. (And also dumb luck/serendipity if you will, especially in the gifting of a “paperweight” between characters.)

The Gentlemen’s fast-twitch quirkiness is captivating and Ritchie’s orchestrations build to a terrific crescendo... swiftly followed by another one after you’ve been lulled into thinking the story has been wrapped up already.

Ritchie’s virtuoso conducting also serves to delay our realisation that The Gentlemen is actually stuffed to the gills with familiar gangster genre tropes and trick.

So crammed, in fact, that just one more wafer-thin mint of (gentle)manly swagger would leave us covered in its exploded guts.

By no means an ordinary league of gents