Uyaina Arshad is dealing with her heart problem with medication. Photo: The Star/Yap Chee Hong

When Uyaina Arshad was hospitalised after fainting at her home in March, she thought it was just due to low blood pressure.

But further tests revealed that the problem was far more serious; the 26-year-old was diagnosed with supraventricular tachycardia, which is defined as an abnormally fast heartbeat.

In an interview, the host of TV3’s Wanita Hari Ini admitted that she couldn’t accept the news at first because it meant she couldn’t partake in tough sports activities any more, which is something she liked to do.

Understandably, she lamented about her condition for a while before deciding to accept it.

At a recent press meet, Uyaina seemed upbeat. “I am handling my health issue with medication,” said the friendly host, who now has to fit in a monthly visit to the doctors on top of her hosting and acting gigs.

Uyaina – whose full name is Shaidatul Naseha Uyaina Arshad – first garnered viewers’ attention when she participated in TV3’s Pencarian Nona Manis in 2015 and nabbed first place. This landed her the job of hosting the magazine show Nona from 2016 to 2017, taking over from Fauziah Gous.

In 2017, the Kuala Kangsar-born beauty followed up her Nona gig by hosting Wanita Hari Ini, a post she holds till today. Along the way too, she also hosted Kashoorga Talk and Pesona Pengantin on the Astro channels, Oasis and Ria.

Her popularity grew, especially in Indonesia, when she participated in Juara Puteri Muslimah Asia 2018, a Muslimah beauty contest organised by an Indonesian TV station.

Uyaina beat 17 contestants from six countries such as Turkey, Brunei, Singapore and Indonesia, to come out on top.

Now she boasts of 35.9k followers on twitter (@UyainaArshad) and 956k followers on Instagram (@uyainaarshad), many of whom are Indonesians.

Not one to sit still, Uyaina got into acting with a small role in last year’s Astro Oasis series Lelaki Kiriman Tuhan.

In April this year, Uyaina was seen in the Astro Ria drama Curi-Curi Cinta, based on the novel by popular author Siti Rosmizah. In it she played the second female lead after Zahirah McWilson.

1. How did participating in Juara Puteri Muslimah change your life?

2. You had a bigger role in Curi-Curi Cinta. How do you like acting in drama series?

I never thought acting could be this hard. I have newfound respect for actors in drama series because it involves a lot of hard work. In Curi-Curi Cinta, I play a kesian (pitiful) kind of woman who lets other people take advantage of her. She is such an obedient person, so much so that I thought to myself, “Is there such a woman still, today?” It was challenging.

3. You studied law in Universiti Malaya. How did your interest in acting begin?

I’ve always loved acting and was quite active in theatre when I was in university. Still, my course mates were quite surprised when I decided to pursue show business after graduating. They said ‘You are not becoming a lawyer?’ because I did quite well in my studies. But I enjoy performing for now.

4. How about your hosting skills?

I think my ability to talk so much started in school where I was part of the debate team.

5. Can I just ask about your unique name and how do you pronounce it?

Oh you have to ask my parents that first question. But it’s an Arabic word for large beautiful eyes. It’s not a common name, and a lot of people tend to pronounce it wrongly. I am used to the different pronunciations now but the start of my name is similar to how you pronounce ‘udang’, you start with the uuu-sound and follow it through. 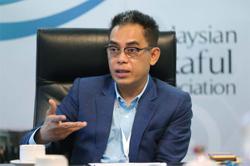