Cartoonist Lat (seated, middle) sharing his thoughts on the art of storytelling at the the recent 38th International Board on Books for Young People (IBBY) International Congress in Putrajaya. Photo: MBBY

It was touted as the meeting of international storytellers. That would be an understatement. It was the meeting of minds and creative maestros, all for the sole purpose of discussing how to bring books and children together.

The recent 38th International Board on Books for Young People (IBBY) International Congress was the gathering of authors, illustrators, publishers, librarians and people involved in books for children.

Hosted by the Malaysia Board on Books for Young People (MBBY) in Putrajaya, the four-day event saw French author Marie-Aude Murail and South Korean picture book artist Suzy Lee receiving the Hans Christian Andersen Award, the highest international recognition given to an author and illustrator of children's books.

While the IBBY Congress is much awaited among its members, IBBY newcomers and many in Malaysia did not hear about it until a month leading up to the event.

It was stimulating to sit in the auditorium of the Kompleks Perbadanan Putrajaya and listen to people from Malaysia and all over the world talk about their experiences with books for children in their country.

Shereen Kreidieh, founder and general manager of Dar Asala publishing, who is also president of the Lebanese chapter of IBBY, talked about the Beirut explosion in 2020 and how everyone was caught by surprise. No answers were forthcoming from the government on the cause of the explosion, but IBBY Lebanon scrambled to get the libraries back in order and books back on the shelves.

While we sit in the comfort of our homes in Malaysia, some may wonder what the urgency was. Bibliotherapy is real and it has been proven by various studies to help children cope with stress and mental health.

Kreidieh revealed that she ran out to the street in her pyjamas and slippers and looked around to see the extent of the damage. Two years later, her country is still trying to reinstall their libraries. She implored the international community to assist in whichever way they can.

A highlight of the congress was the biennial IBBY honour list presentation. Many writers, illustrators and translators from IBBY member countries were applauded for books published. Malaysia was not left out. On the list were MBBY president Datuk Ahmad Redza Ahmad Khairuddin, editor of Magnificent Putrajaya; illustrator Nor Azhar Ishak for Tuty The Turtle; and translator Liew Chooi Peng for Anak Murid Yang Memakai Kain Cawat.

Baek Heena and Suzy Lee had the audience gasping and reaching for their camera phones to capture the images and videos projected on the auditorium screen. People gasped and smiled at the creativity displayed in the pages of their children’s picture books.

Baek’s books consist of photos of scenes featuring clay characters. Baek’s dedication is admirable – one photo of a scene for her book could take up to three weeks to photograph. Her insistence on getting the right angle and lighting is a testament to her patience.

Baek, whose background is in film animation, is the 2020 Astrid Lindgren Memorial Award (ALMA) laureate.

Meanwhile, Lee took the audience out of their traditional way of thinking, pushing the envelope in the form factor and presentation of stories. After all, why should a story or piece of art be confined to the usual dimensions of a book? Her accordion book, unfurled on the stage floor, was impressive in its splashes of watercolour and offered a feast for the imagination.

Malaysians were of course not left out.

From national laureate Muhammad Haji Salleh’s keynote on the power of pantun to authors Sharifah Aishah Osman, Heidi Shamsuddin and Tutu Dutta’s discussion on Malaysian stories, there were many ideas presented, resulting in a proliferation of more ideas among attendees.

Inspired by Muhammad’s explanation of pantun characteristics, one participant from Finland even tried her hand at writing a pantun in Finnish. The poem was read out on the last day of the congress by MBBY vice-president, Prof Dr Md Sidin Ahmad Ishak, who is also Professor of Communication, University of Selangor (Unisel). 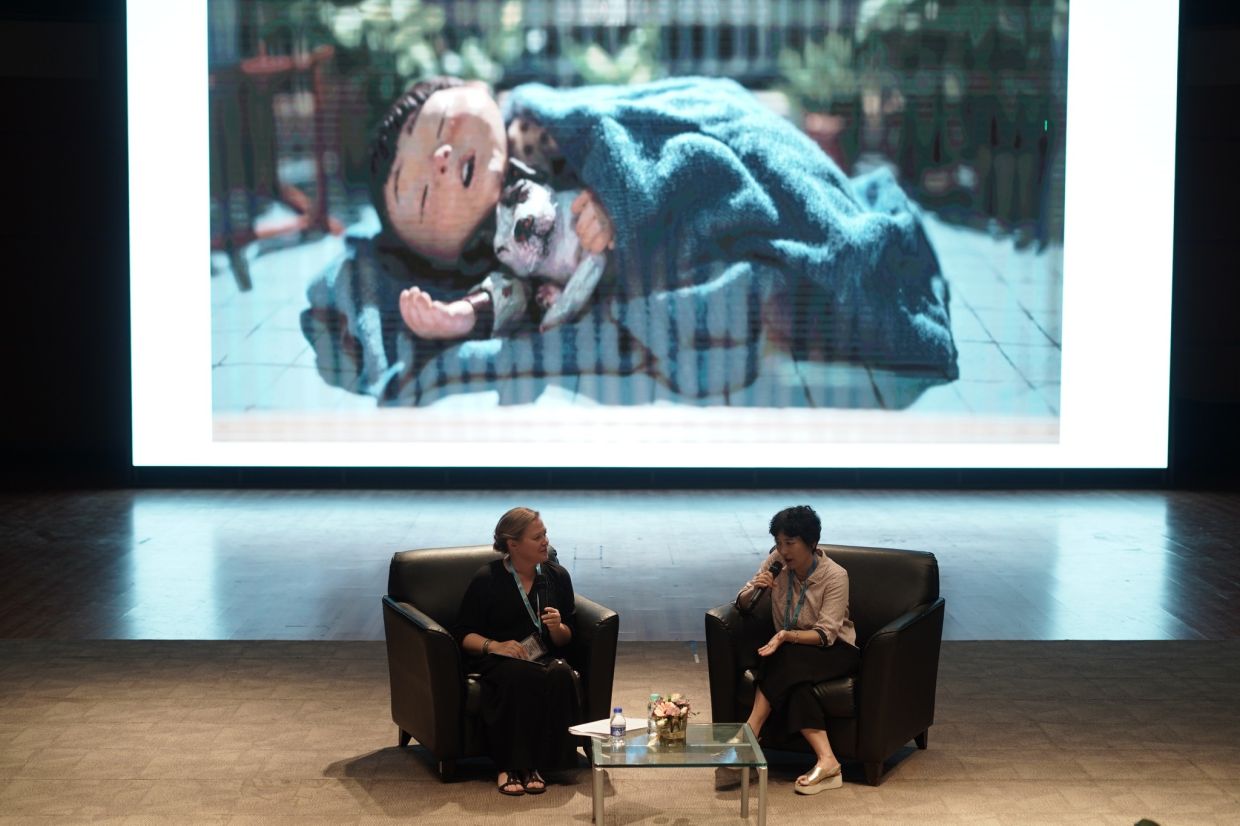 The auditorium of the Kompleks Perbadanan Putrajaya hosted participants from Malaysia and all over the world who talked about their experiences with books for children in their country. Photo: MBBY

The last day also saw Malaysia bring out the big guns. Our beloved cartoonist and national icon Datuk Mohammad Nor Khalid, affectionately known as Lat, regaled the crowd with stories of how he started. Linda Tan, managing director of The Museum of Picture Book Art, spoke about celebrated children’s picture book artist, the late Yusof Gajah, who passed away in March. Tan is the managing partner of the Yusof Gajah Lingard Literary Agency.

While there were many exceptional speakers, the masterful Murail stood out from the start. Her hat and stance set her apart from everyone else. She proved to congress participants exactly why she is special and outstanding.

Choosing to speak on something she is passionate about instead of falling in line with the congress agenda, she talked about censorship. It is like that nasty uncle in everyone’s family – we all know he’s there but nobody wants to talk about him. People sat up when she started, all eyes peeled on her and her daughter, who served as her interpreter.

She told the audience about facing censorship in her work and their translations. Oh! Boy (first published in 2000) is one book that risked being banned because its gender-related theme. Murail reminded authors, illustrators, publishers and librarians that the onus is on them to fight the system and the people who try to suppress alternative thoughts. Her books speak up for those who can’t and resonate with those who live the truth of those lives.

She reminded us to keep the children in mind as we write and publish rather than project our feelings and challenges onto the kids and what we assume will affect and “traumatise” them.

Murail spoke bravely and prompted everyone in the auditorium to be as courageous.

Another highlight of the congress was the IBBY general assembly where Sylvia Vardell from the United States was elected president, replacing Mingzhou Zhang from China. Outgoing executive director, Liz Page of the United Kingdom, was replaced by Carolina Ballester, who is from Spain and works in China.

The congress was indeed a great networking opportunity for those who work with children’s books. After two years of being stuck in our homes, it was welcome and refreshing to listen to different ideas and experiences from around the world. The global industry of children’s books is not that large after all. At the end of the day, we all face similar issues and challenges and our aim is the same – to see the joy on the faces of children when they read books.

Participants and presenters feasted on a buffet of experiences over the four days, and the IBBY congress successfully delivered its theme – "The Power of Stories". 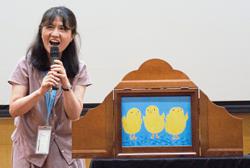