Elizabeth Hand's 'A Haunting On The Hill' is scheduled to come out in fall 2023. The estate of Shirley Jackson has authorised this upcoming novel inspired by her classic book 'The Haunting Of Hill House', released in 1959. Photo: Handout

The family of the late Shirley Jackson has authorised a novel inspired by her classic The Haunting Of Hill House. Elizabeth Hand's A Haunting On The Hill is scheduled to come out in fall 2023.

"In conversations with Liz we have become convinced that she will continue our mother’s work in a style and form compatible with Shirley’s,” said Jackson's son Laurence Jackson Hyman in a statement released on Thursday through Hand's publisher, Mulholland Books.

"We believe that this initial collaboration with Liz Hand will further enhance the burgeoning literary legacy of Shirley Jackson, and help to continue her literary presence and influence well into the 21st Century.”

The literary standing of Jackson, who died in 1965 at age 48, has risen sharply over the past decade, with the author widely praised as a master of suspense, horror and psychological insight. Many of her books have been reissued, including some in bound volumes from the Library of America, and her family has overseen the posthumous release of unpublished stories and letters.

In 2007, the family approved the establishment of the Shirley Jackson Awards for "outstanding achievement in the literature of horror, the dark fantastic, and psychological suspense.” The inaugural winner for best novel was Generation Loss, by Hand, who has since received two more Jackson awards, along with four World Fantasy Awards and two Nebulas.

The Haunting Of Hill House, published in 1959 and later adapted for film, theatre and Netflix, is a Gothic horror novel set in a remote mansion visited by four characters, including an explorer of the supernatural. According to Mulholland, an imprint of Little, Brown and Company, Hand's book will centre on a theatre troupe that uses Hill House to rehearse a modernist staging of the 17th century play The Witch Of Edmonton.

"I started reading Shirley Jackson’s work when I was nine years old and have never stopped returning to it," said Hand, 65, in a statement.

"Her mordant wit and insight into the darkest chambers of the human heart shaped me, first as a reader and then as a writer. I am thrilled and honoured beyond measure to have this opportunity to revisit Hill House, and I hope that others who love Jackson’s work as much as I do will accompany me on that journey.” - AP 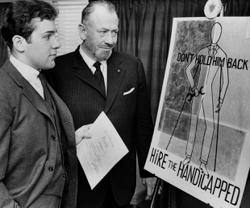