'Tan Twan Eng’s new book is an exquisite, transporting beautiful thing, the kind of fiction that makes you want to stop all the clocks and immerse in its world,' says publisher-at-large Francis Bickmore. Photo: Handout

British independent publisher Canongate has inked a deal for award-winning Malaysian author Tan Twan Eng’s new book The House Of Doors, which is scheduled for release in March 2023.

According to a report on The Bookseller website, publisher-at-large Francis Bickmore purchased UK and Commonwealth rights, excluding Canada, from Jane Gregory at David Higham Associates.

The Penang-born Tan, who turned 50 earlier this year, is returning to the literary world with his first new book in a decade.

The House Of Doors journeys back to British Malaya and draws on real events in Penang 100 years ago.

The book, which revolves around a couple’s friendship with author and playwright William Somerset Maugham, is set in Penang in the 1920s and orbits the imperial dynasty of China and the unease of the Empire.

"The House Of Doors is a masterful novel, based on real events, exploring love, betrayal, public morality and private truth under the shadow of Empire," outlines the book synopsis.

"It is 1921 and at Cassowary House in the Straits Settlements of Penang, Robert Hamlyn is a well-to-do lawyer and his steely wife Lesley a society hostess. Their lives are invigorated when Willie, an old friend of Robert’s, comes to stay.

"Willie Somerset Maugham is one of the greatest writers of his day. But he is beleaguered by an unhappy marriage, ill-health and business interests that have gone badly awry. He is also struggling to write. The more Lesley’s friendship with Willie grows, the more clearly she sees him as he is – a man who has no choice but to mask his true self.

"As Willie prepares to leave and face his demons, Lesley throws caution to the wind, and confides how she came to know the charismatic Dr Sun Yat Sen, a revolutionary fighting to overthrow the imperial dynasty of China. And more scandalous still, she reveals her connection to the case of an Englishwoman charged with murder in the Kuala Lumpur courts – a tragedy drawn from fact, and worthy of fiction."

Canongate, which is based in Edinburgh, Scotland, will also be republishing Tan’s Booker-longlisted debut novel The Gift Of Rain in its "Canons" series this month.

The Gift Of Rain was longlisted for the Man Booker Prize in 2007 and has been widely translated. The Garden Of Evening Mists (2012) won the Man Asian Literary Prize 2012 and the 2013 Walter Scott Prize for Historical Fiction and was shortlisted for the Man Booker Prize 2012 and the 2014 International IMPAC Dublin Literary Award.

The Garden Of Evening Mists, which Canongate also released, is also Malaysia’s first novel to be shortlisted for the Man Booker Prize. The novel was adapted into a movie, which was released in early 2020.

A former intellectual property lawyer, Tan divides his time between Cape Town, South Africa, where he studied for a master's degree in law and currently lives, and Kuala Lumpur, where he was raised in Malaysia.

The House Of Doors is his third novel. 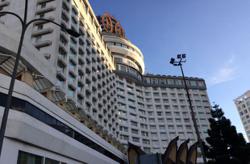