Theatre actors Nabil Zakaria and Jun Teoh, like the protagonist in the upcoming revival of Irish dramatist Brian Friel’s classic play Philadelphia, Here I Come!, can identify with the duality of having a public and private persona.

Teoh and Nabil play the restless “Danny Tan” in KLPac’s adaptation of Philadelphia, Here I Come!, directed by veteran director Joe Hasham. Presented by The Actors Studio Seni Teater Rakyat, the 140-minute play (with two intermissions) will hit the stage from July 9-17 at Pentas 2, KLPac.

Originally set in the fictional town of Ballybeg, Ireland, Hasham’s version of Philadelphia, Here I Come!, is set in Cheras, Kuala Lumpur, the land of busy neighbourhoods and unending traffic jams where the Tan family runs a mini market.

The young Danny Tan is about to trade in his stifling shophouse home and the land of nasi lemak for the bright lights of Philadelphia in the United States. But is the grass really greener on the other side?

That’s where the two actors come into their own in this show, which is one of KLPac’s major productions of the year.

“I have put up many walls in my life to function in normal society. The private side of me is like a child or a clown but I can’t express myself that way publicly. It’s a struggle. But with this play, I’m questioning those walls. I realise it’s about coming to terms with yourself. It’s a lovely, beautiful struggle,” says Teoh, 28, in a recent interview after a rehearsal at KLPac. 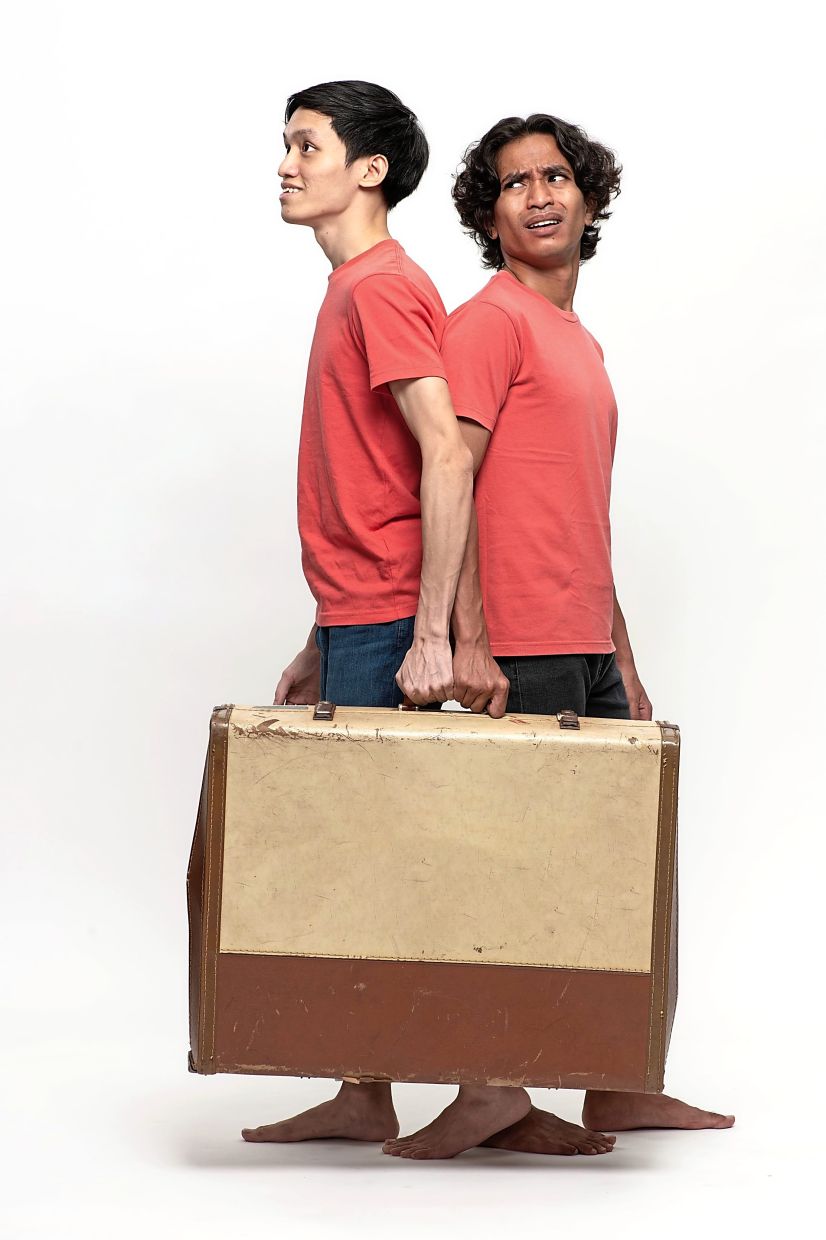 Both actors have come into their roles with a series of experiences from their own lives.

“When I was younger, ‘Nabil Private’ was a huge part of my life. I put on a lot of masks, acting differently with different people. Sometimes, I felt like there were two people living inside of me,” says Nabil, 32.

“The duality of an individual has always been something I’m familiar with and it’s what attracted me to this play. I see the similarities between my personal life and Danny’s. I know what he is going through.

“But, I’ve been shedding a lot of my masks now, which makes Nabil Private smaller. He is still there but I think Nabil Public is the main man now,” he adds.

The Australian-born Hasham, who took on the role of Public Gareth (Danny Public) in a 1969 production of Philadelphia, Here I Come! in Perth, is no stranger to this Broadway hit.

He first directed the play in 1994 at Auditorium Dewan Bandaraya Kuala Lumpur with the late Dicky Cheah and comedian Harith Iskander as the leads.

“When I read the play, everything about it – the narrative, the characters, the situation – screamed out to me ‘Hey, this is very Malaysian!’ And when audiences first watched it, they thought it was an original Malaysian script. That’s how relatable it is,” recalls Hasham, 74, who restaged the show in 1998 and 2013, with both garnering critical praise.

In the The Actors Studio’s history, Philadelphia, Here I Come! was the first play to receive a localised context.

“This is why I keep going back to it. It’s poignant, hysterically funny, it’s got drama, sorrow, heartache, love and longing. And the genius of having two people playing the one character... brilliant!” he adds. 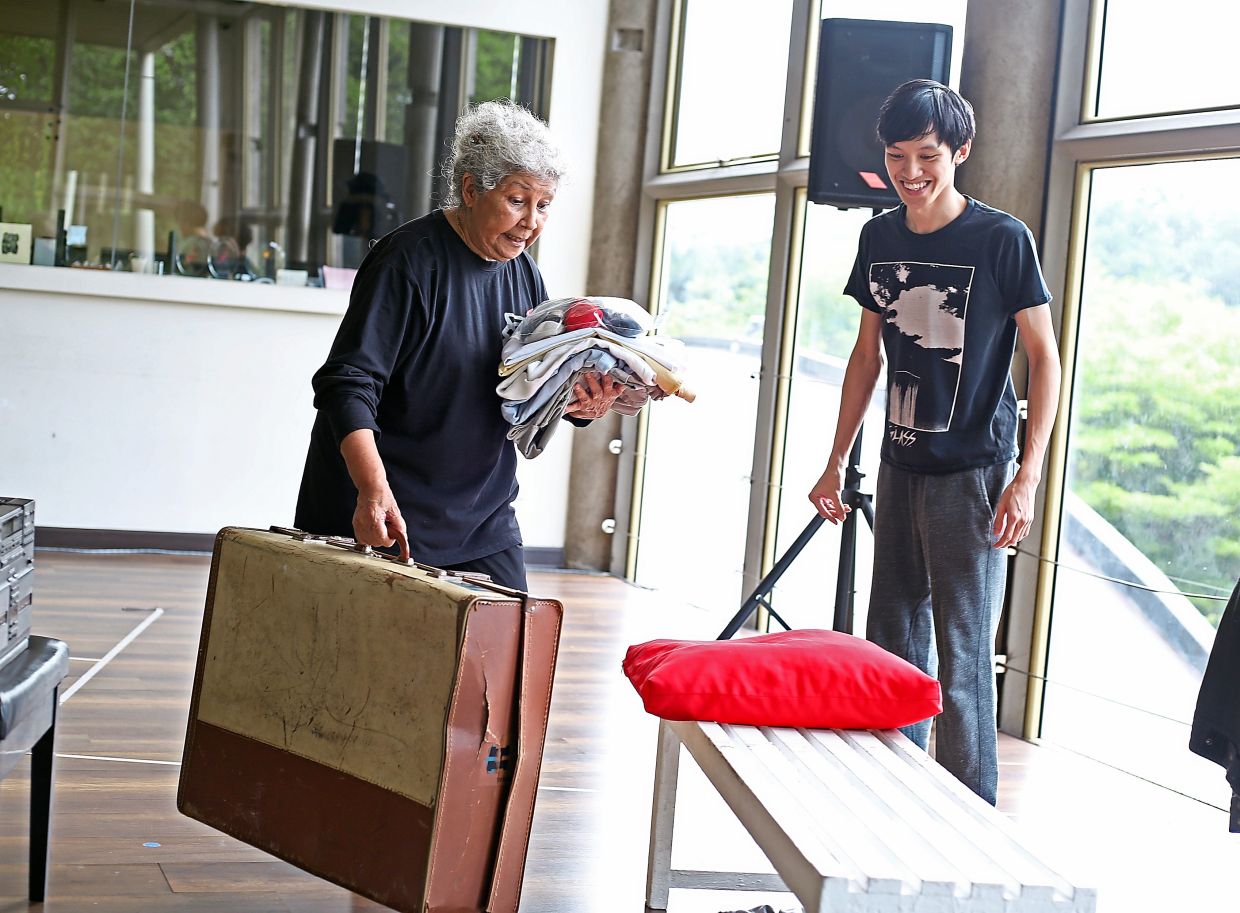 Faridah (left), seen at a rehearsal, plays Mak Esah in the play. She is the pillar of the Tan household. Photo: The Star/Izzrafiq Alias

Unlike the previous staging set in the New Millennium, this upcoming version turns the clock back to 1997 – the year of Hong Kong’s handover (to China), Princess Diana’s tragic death and the blockbuster film Titanic.

“We did this because, dramaturgically, we felt that going to Philadelphia was not such a big deal in the 2000s. If a young man (today) had his options, Philadelphia would not be the place to go. Setting it in 1997 made more sense,” says Hasham.

The director enjoys how Philadelphia, Here I Come!, which was first staged at the Gaiety Theatre, Dublin in 1964, and had a highly-successful Broadway run, can make such a strong connection with everyday Malaysians.

It gathers the story of a young man – in his mid-20s – who is eager to leave his home and move to a better country. He also has difficulties communicating easily with his father, and they’re unable to truly connect.

Themes such as communication, affection, emotional escapism and the quest of a fresh start are rather timely now. 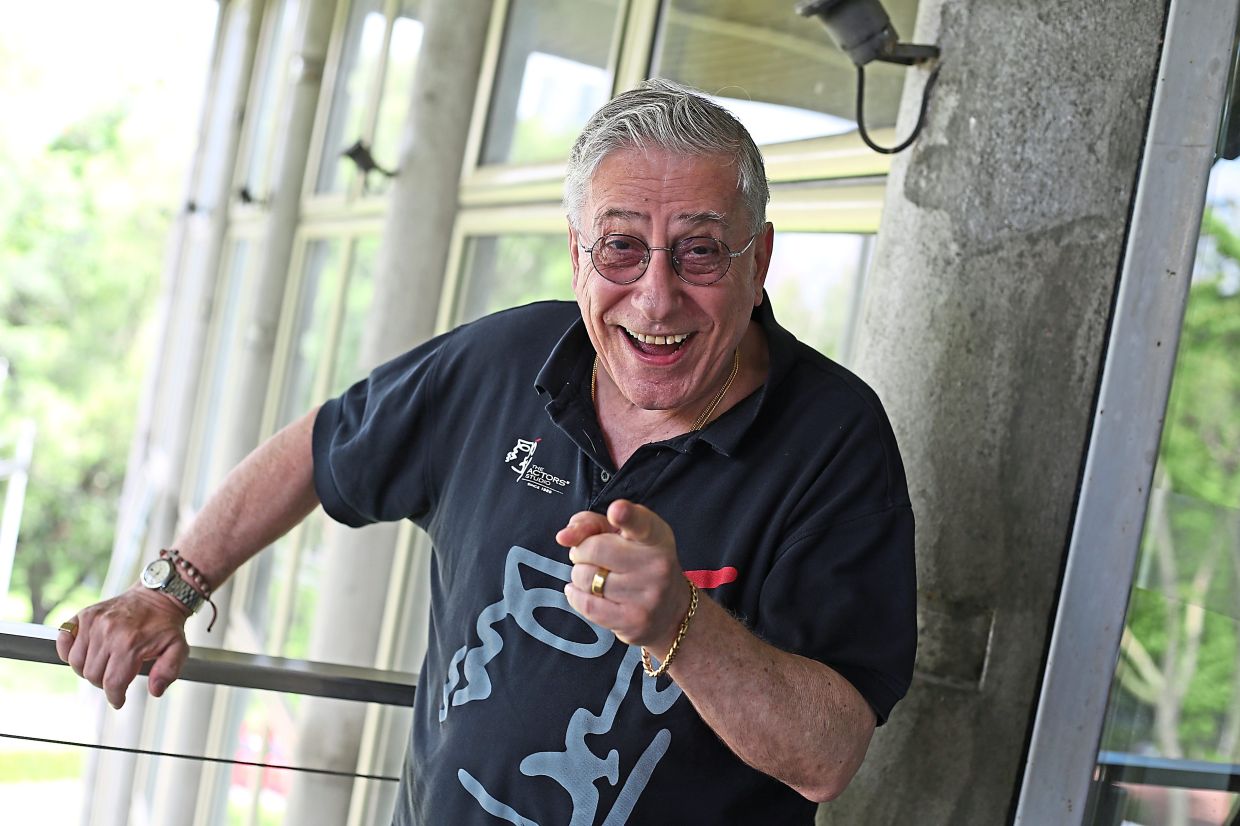 ‘When I read the play, everything about it – the narrative, the characters, the situation – screamed out to me ‘Hey, this is very Malaysian!’,’ says Hasham. Photo: The Star/Izzrafiq Alias

The play was originally set in the fictional Irish town. Hasham’s local adaptation is set in suburban Cheras, where SB Tan (Patrick Teoh) and his son Danny take care of a neighbourhood mini market.

"It is always fun and exciting because with each staging there are new people and new talent to work with and learn from. And for me, reprising the role (of SB Tan) for the second time is great fun because I can see the difference in the interaction with these new and younger actors," says Patrick.

"Part of the play is about communication within family which in many Asian contexts a touchy and oft un-discussed subject. Many relationships have been destroyed by the inability or unwillingness to communicate. Too much regret after the fact. Much the same as what is happening to the country at the moment," he adds.

Faridah plays Mak Esah, who in many ways, is the pillar of the Tan household. She is a mother figure to Danny, who longs for a proper relationship with his father.

"Joe (Hasham) and I always discuss what we should and can restage, not just for us but for audiences who would get either a second chance or see it for the first time. And this is such a good play on relationships between father and son," says Faridah.

In the script, the character Danny feeling bored and unloved, is ready to make big changes for himself. He accepts his aunt’s (Ang) offer to work in a hotel with her in Philadelphia, and to begin a new life, leaving behind his uncommunicative father, a lost love, and his party-loving friends.

The Cheras middle class boy is out to find a new beginning and himself. But things aren’t so clear cut.

The play is set the night before Danny’s departure and contains numerous flashbacks to his life before his decision to leave.

At the heart of the play is this very pertinent question – what happens when a place you used to belong to no longer holds any appeal? If it is possible to fall out of love with a person, why not a place as well? Do you stay and try to regain that love, or move on, in the hope of finding better things?

There are many reasons why people choose to leave home. It’s a topic that cannot be ignored in Malaysia. 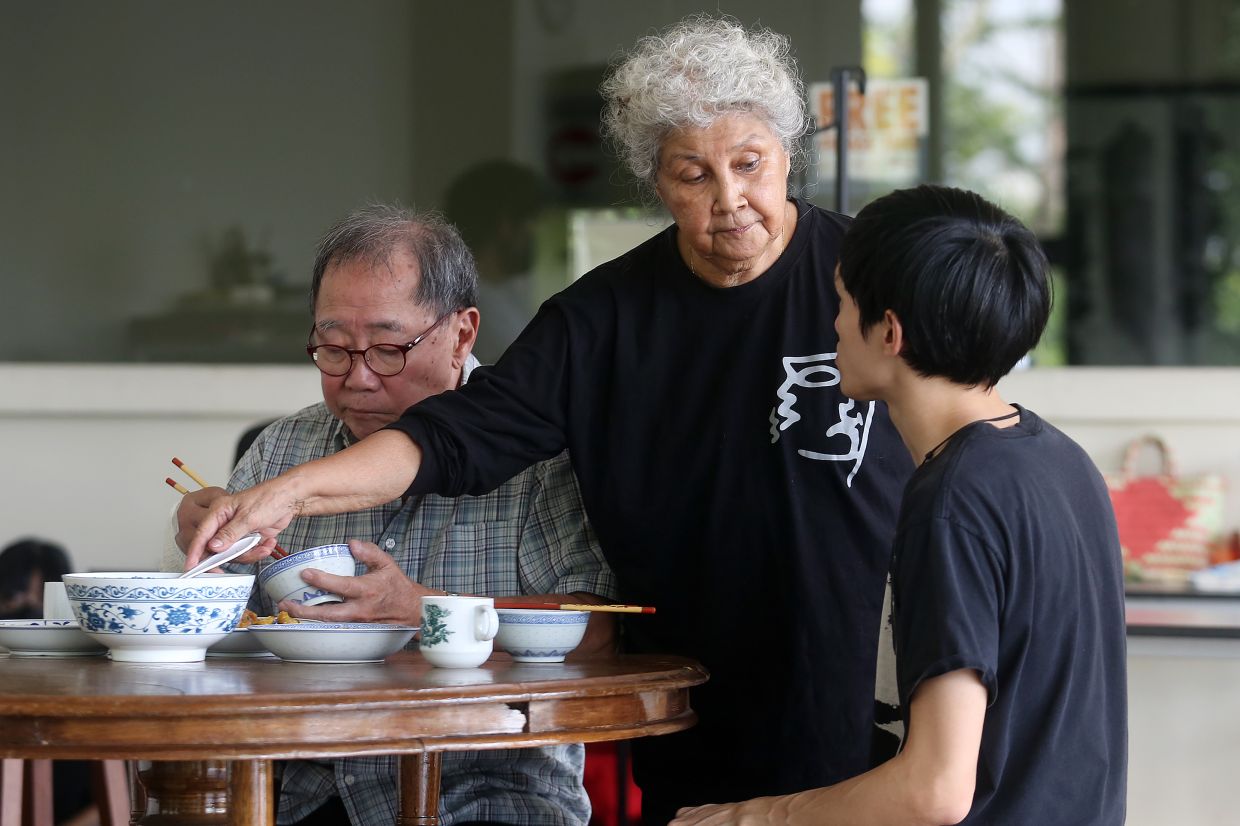 'I suppose if it’s a good story it’s worth telling again and again. Kudos to Brian Friel but also to Joe’s adaptation making it so Malaysian,' says Faridah (standing in a rehearsal scene). Photo: The Star/Izzrafiq Alias

But more than just seeking greener pastures, Hasham reveals the story of the play is “love, though it may be unspoken” and relationships, especially the troubled relationship between Danny and his father.

Hasham recalls his own relationship with his late father, which he admits was not always the best.

“Don’t get me wrong. My father was an amazing man, good and hardworking. But because he was so locked into providing for his family, what he didn’t provide for was the emotional contact.

“The communication factor with him was difficult compared to my mother. And I do reference these elements in the play,” shares Hasham, adding that his relationship with his father, who passed away in 2011, did eventually get better.

For Nabil, it was the fraught relationship between Danny and his father that attracted him to the play.

“It reflects my own relationship with my father... which isn’t the best. We have our differences,” says Nabil, whose theatre stage credits include Dysforia, Kandang and The Bee.

“It’s the distance... I recognise that. I know the feeling. But the more I got to know the play, the more I realised that the nature of the relationship is different. Danny wants to know whether his father loves him. That’s not the case with me and my dad,” he adds.

Teoh agrees with Nabil and mentions that the “strange distance” between him and his parents is something he definitely recognised and tapped into.

In fact, the actor, whose stage credits include Unity 1918 and A Midsummer Night’s Dream, mentions that he has “trouble separating it because it is so relevant right now to me.”

In fact, Hasham says this is something the audience members would be familiar with.

“I feel like many Malaysians don’t know the feeling of having a wonderful relationship with their parents, particularly young men with their fathers. There is that restraint, the cultural element that stops people from showing their emotions.

“I think a lot of the audience would probably see themselves in one way or the other... either as the child or the parent. Not only do I find this relevant, it is also educational in that if they recognise this, they might do something about it,” concludes Hasham.

'Philadelphia, Here I Come!' will play at KLPac from July 9 to 17. More info here.