This Aswara (National Academy of Arts, Culture and Heritage) mini documentary, presented by its faculty of creative writing and film, gives viewers a glimpse of vinyl culture in Malaysia. The localised views definitely sets it apart from the usual international vinyl chatter.

In the last 10 years in Malaysia, there has been a big revival in record collecting, and a healthy secondary market for used local vinyl has emerged. The arrival of several independent record shops (since 2014) and online vendors has added to the buzz.

But the days of affordable records and cheap digs are rare now. Prices have shot up due to various factors (mainly the weak ringgit) and there have been question marks if young collectors can sustain this hobby, which can be an expensive one.

Has this niche record-collecting scene reached a saturation point, or is there still room to grow in Malaysia? The list of interviewees share their views on the vinyl scene. They include the main players from Teenage Head Records, Format Fizikal, Earbleed Records, deejay collectives Layu Kembang and Disko Santan.

The documentary is presented in Bahasa Malaysia and English. It is directed by Ariff Aiman. Visual artist Dr Mohd Fuad Arif will take a deep dive into a fundamental topic for an artist - art and ideas - in this Saturday’s edition of Pendidikan Seni EDU@NAG.

Hailing from Keningau, Sabah, Fuad is a well-established local artist, who has a Masters in Art and Design from Universiti Teknologi Mara in Shah Alam. He has won several art prizes, including the The Young Contemporary 2013 (Bakat Mudah Sezaman) award from the National Visual Arts Gallery. A screen shot of the Malaysian Mridangam Network series.

The Malaysian Mridangam Network by Malaysian mridangam artist Sivabalan Shanmuga Sundram (managing director of Thrive Talent Tank) highlights the history and use of this double-sided drum by local players.

Supported by the Cultural Economy Development Agency (Cendana) and MyCreative Ventures, this three-episode virtual series consists of two parts: interview with a mridangam player and a demonstration. In this third episode, catch Darmen Krishan as he shares his journey as a local mridangam player and demonstrates his skills in mridangam and kanjira (South Indian frame drum). You can also catch the first two episodes on Youtube.

The Malaysian Mridangam Network project aims to produce an e-library of all professional and semi- professional carnatic and Hindustani practitioners in Malaysia.

Concipes is about two women who bump into each other at a bus stop in the midst of a pandemic lockdown. One of the women decides to leave and at the same time, a young man comes running towards the bus stop. Unfortunately, he faints and had to be rushed to the hospital. Unbeknownst to him, the woman who was left behind at the bus stop takes his backpack only to discover a long concealed truth.

Robot Tiba-Tiba Muncul Di Halaman Rumah Kami Pada Suatu Petang is about a robot who arrives at a village and decides to live with one of the families. Soon, the robot becomes a threat to the family and the village as it wants to destroy the people’s way of living.

Rumah Septuagenarian is a heartwarming story about two volunteers who help out at an old folks home and the relationships they form with the residents there. They encounter colourful personalities and even get to witness two septuagenarians fall in love. Moonlight, ticketed, can be streamed via CloudTheatre Revive.

Have you wondered how and why the nurse’s uniform evolved over the years? In this virtual talk by Muzium Negara moderated by Suriyati Bee, chief supervisor of state nurses with Devi Saravana Muthu, director of nurses under the Health Ministry, find out the history and evolution of the Malaysian nurses uniform. What’s the significance of the uniform’s colour? Why do nurses wear caps? Explore these questions and much more in this virtual talk series.

The Evolution Of Malaysian Nurses Uniform, in Bahasa Malaysia, can be streamed via Muzium Negara’s Facebook page. 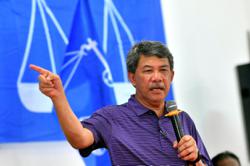