A scene from the 'Finding Bundusan' mini documentary, where filmmaker/artist Jesse Joy highlights his grandmother Abini Joy's traditional weaving story. Her tikar bundusan is also on display at the 'Epistolaristics' exhibition in KL. Photo: Jessey Joy

Jesse Joy didn’t give it much thought when his friend Eleanor Goroh, a Sabahan beader and culture activist, gave him a badge as a gift a few years ago.

“I can’t remember what was written on the badge but she gave it to me and said, ‘I hope someday, you will make films.’

“It was such a sentimental gift and I was just grateful that someone had faith in me,” recalls Jesse, an embroidery artist from Sabah with Kadazan/Indian heritage, during a recent Zoom interview.

Not knowing when his time would come (to make films), Jesse kept this promise close to his heart. Unbeknownst to him, seven years later, serendipity would bring it all full circle.

Finding Bundusan, his first short film project, is now showing at the GMBB creative mall in Kuala Lumpur until June 5 as part of the Epistolaristics exhibition.

Epistolaristics is the culmination of the SEM/ALAM Art Lab, an art incubation programme initiated by Glossaries For Unwritten Knowledges, which took place virtually last year (Nov 27 to Dec 12). It aimed to facilitate greater critical media literacy and proficiency in working with the moving image, specifically for Orang Asal practitioners. 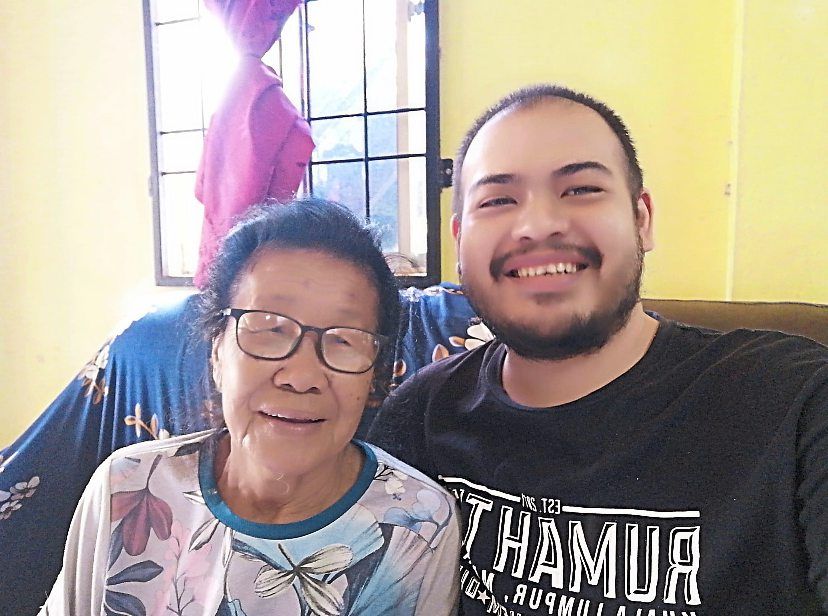 Jesse with his grandmother Abini. Her ‘tikar bundusan’ is now part of her grandson’s exhibit for the 'Epistolaristics' show at GMBB in KL. Photo: Jesse Joy

The Epistolaristics exhibit features the research of six Orang Asal artists and filmmakers – from Sabah and Sarawak – who are working on the intersections of contemporary art, filmmaking, performance, and embroidery.

Jesse’s 18-minute documentary tracks the search for the bundusan or grey sedge, a resilient plant that grows in marshy areas. Also known as kercut in Peninsular Malaysia, the bundusan is found in Madagascar, Western Pacific, Australia, India and South East Asian countries.

The plant is usually harvested and weaved into mats, baskets and bags. In Borneo, it is used for tobacco packaging and also to dry padi, among other things.

Jesse’s Finding Bundusan features a series of interviews surrounding the use of bundusan grass and its significance to Kadazan-Dusun culture.

A tikar bundusan, woven by Abini Joy, his 82-year-old paternal grandmother, is also being proudly exhibited at the GMBB venue to accompany the documentary.

Finding Bundusan is as much about Jesse’s search for the bundusan as it is about rediscovering his indigenous cultural heritage. 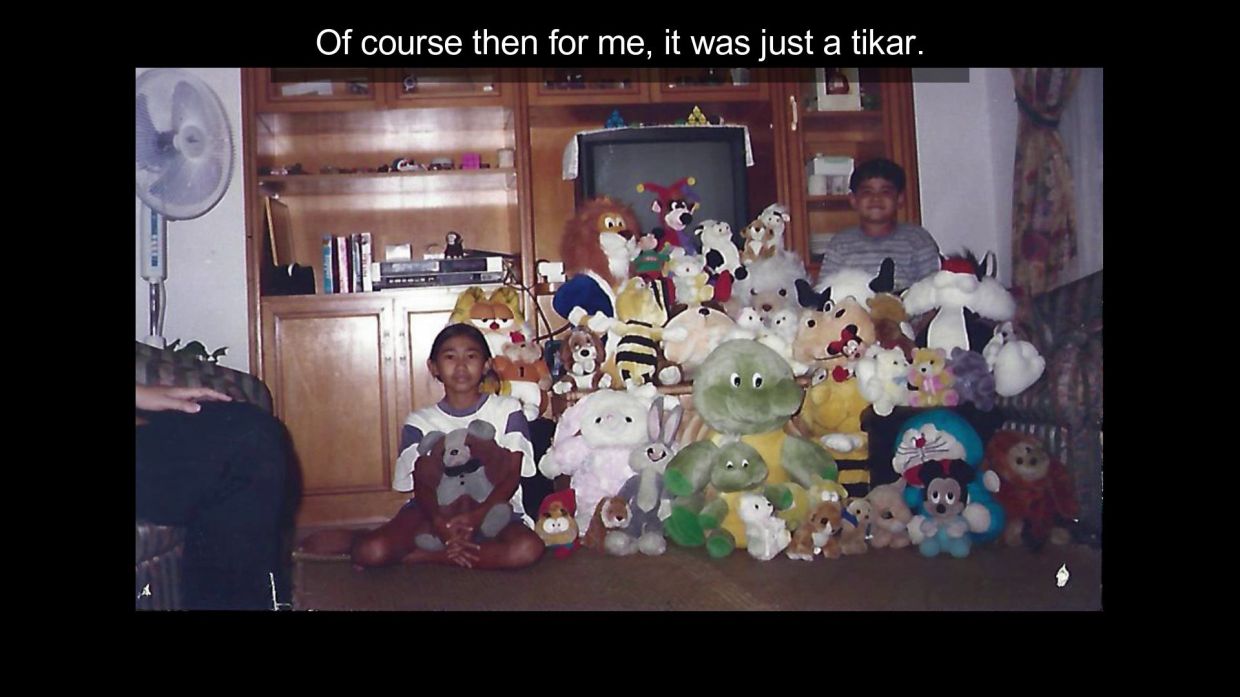 “This is a very personal project to me. To begin with, my grandmother weaves tikar bundusan. I grew up watching her do it, but only now I’m able to fully appreciate this culture of my people.

“It’s more precious and personal to me because now, having done the research and the interviews, I have a deeper connection,” says Jesse, who works in Kuala Lumpur as a graphic designer at indie publishing company Buku Fixi.

He fondly recalls a time 10 years ago when his grandmother showed him – step-by-step – how to weave the tikar bundusan. It started off well but he soon realised that it was getting more and more complicated. He got so lost in the handmade process that he ended up ruining the weave.

“I simply apologised and left,” says Jesse, who graduated from Kuala Lumpur Metropolitan University College’s broadcasting and film diploma in 2012, with a chuckle. 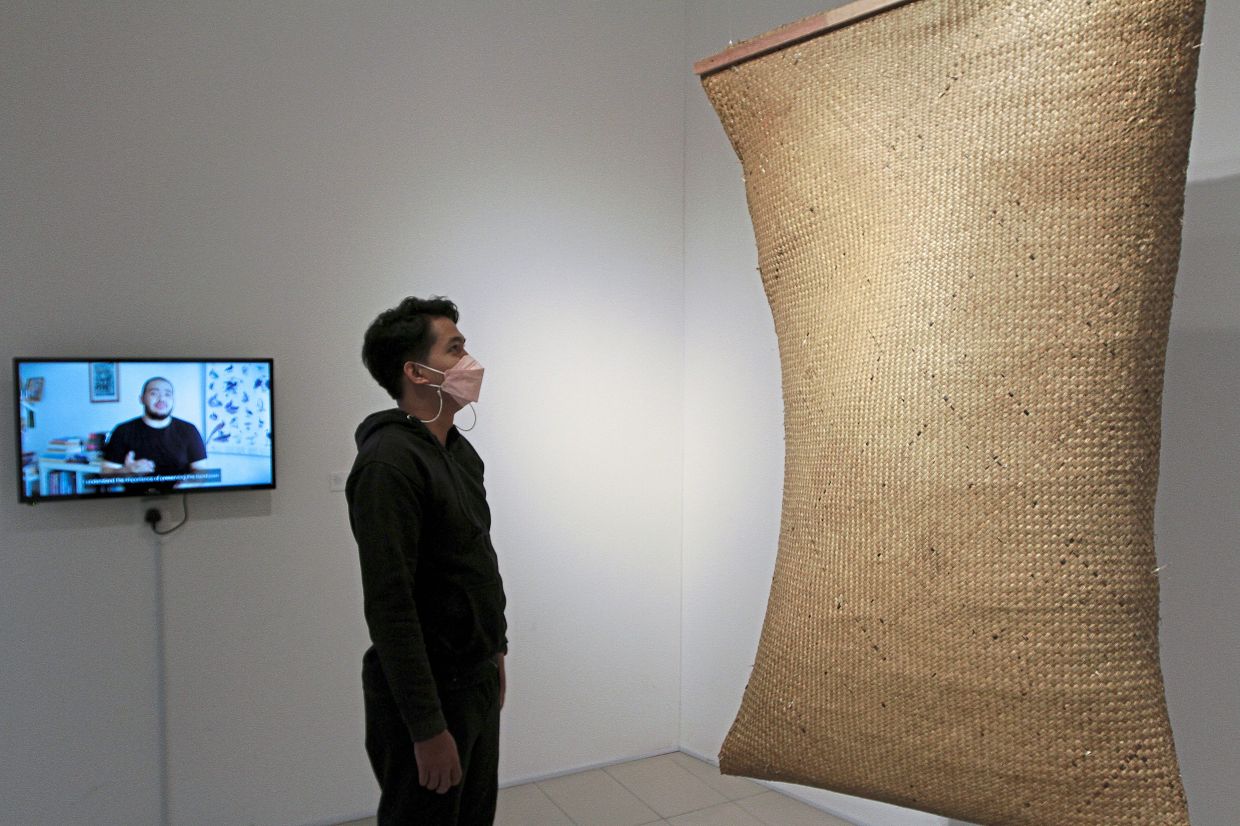 Recently, Jesse’s family, who live in Kampung Kopimpinan in Putatan, near Kota Kinabalu, played Finding Bundusan at his grandmother’s house on Mother’s Day.

She was one of his interviewees for the documentary.

“My cousin told me that she was impressed with the documentary and even commented that she looks beautiful on film!” shares Jesse, with much pride.

He adds that besides family stories, Finding Bundusan is also about the environmental threat to the bundusan due to land reclamation and cultural history and the connection between the Kadazan-Dusun people and the land.

As an exhibition in the heart of KL, Epistolaristics – despite its modest scale – is laying down an important marker that younger indigenous voices in Malaysia are ready to be heard, using contemporary storytelling to reach a wider audience.

At the exhibition space, you can tell this is a passionate and significant effort to represent Orang Asal through arts and culture, while also assisting them in reclaiming their identity and sense of belonging to the greater Malaysian identity.

“The exhibition aims to bring into view the entangled idea that while there is no one way of being Orang Asal – given the diverse communities, cultures, and ecologies that are present – there are indeed certain resonances and parallels to be found amongst everyone’s lives and histories,” offers curator Alfonse Chiu. The 'Epistolaristics' exhibition with its multimedia content hopes to broaden the narrative surrounding indigenous arts and culture. Photo: The Star/Yap Chee Hong

“These are timely and relevant echoes of some of our greatest challenges collectively in this era: climate change, the preservation of heritages, and how we navigate and negotiate our own identities,” Chiu adds. Chiu is a Taiwanese research assistant at Nanyang Technological University in Singapore.

From short documentary films and digital prints to experimental moving images, this exhibition features works-in-progress/process from the participants’ artistic investigations.

Chiu, 25, explains that the idea behind presenting the exhibition in the epistolary form – a literary form in which a novel is written as a series of documents – has proven to be an important framework to “think about how to bring together the richness and textures of the works and the artists’ generosity without lapsing into the problematic trope of yet another standard minority practitioner showcase.”

“What is interesting is that, because of the way it is written, an epistolary novel has to embody multiple different perspectives at one time, even when it is focused on a single event, character, or story, and it substitutes the subjective reality of a work that would otherwise be actively interpreted as fiction, with an ambiguity that allows for multiple truths to emerge alongside an official account of the real.

“Just like how we interpret the notion of an indigeneity, within and without the indigenous communities, the creation of a public consciousness is an epistolary act—or, epistolaristics,” explains Chiu, who is a part of Centre For Urban Mythologies, a project-based research initiative. In KL, Epistolaristics is co-presented by Orang Asli arts and archiving initiative Gerimis Art Project (Gerimis) under the Glossaries For Unwritten Knowledges initiative that aims to empower indigenous communities and narratives of Malaysia and research partner Persatuan Kebudayaan & Kesenian OA Perak. It is supported by the Prince Claus Fund and the Goethe-Institut.

Jesse shares that while SEM/ALAM sparked the idea of making a film, it was a linangkit (an indigenous needlework technique) workshop in Tuaran, Sabah in March that birthed Finding Bundusan.

Initially, the plan was to just write an essay for Epistolaristics and exhibit his grandmother’s tikar bundusan.

“I was appalled that I thought I could write an essay for something I don’t know much about,” he admits sheepishly.

But when he chanced upon the linangkit workshop, Jesse made a vow that if he was able to register for the it and get his plane tickets sorted, he would make a film about bundusan. And as fate would have it, his last minute plans fell into place. “I never planned to fly back to KK. But when this workshop came along, I knew I had to go. The timing was just right,” says Jesse animatedly, adding that he spent a week shooting in KK, Penampang and Papar.

Chiu explains an exhibition like Epistolaristics is crucial at this moment in time because “what it aims to do is to expand the conversation and terms of references between what we imagine a Malaysian indigeneity to be and what it actually is, which is something deeply complex, intimate, and connected to the natural environment in ways that many of us who exist in highly urbanised landscaped have lost or forgotten.”

For instance, Baker’s Tarun reflects on the complexities and impossibilities of language continuance and cultural survival.

Baker is based in Sydney and wants to be known as a “Malaysian Bidayuh/Australian artist” who makes video and installation art.

In Tarun, she narrates her migration story in broken, halting Bidayuh. This work was originally commissioned by Australian arts platform Prototype in 2020 and was a finalist in the 2020 Fishers Ghost Art Award. Another new work at this KL show from Baker is a digital print and QR code series that explores the crocodile in Bidayuh mythology. 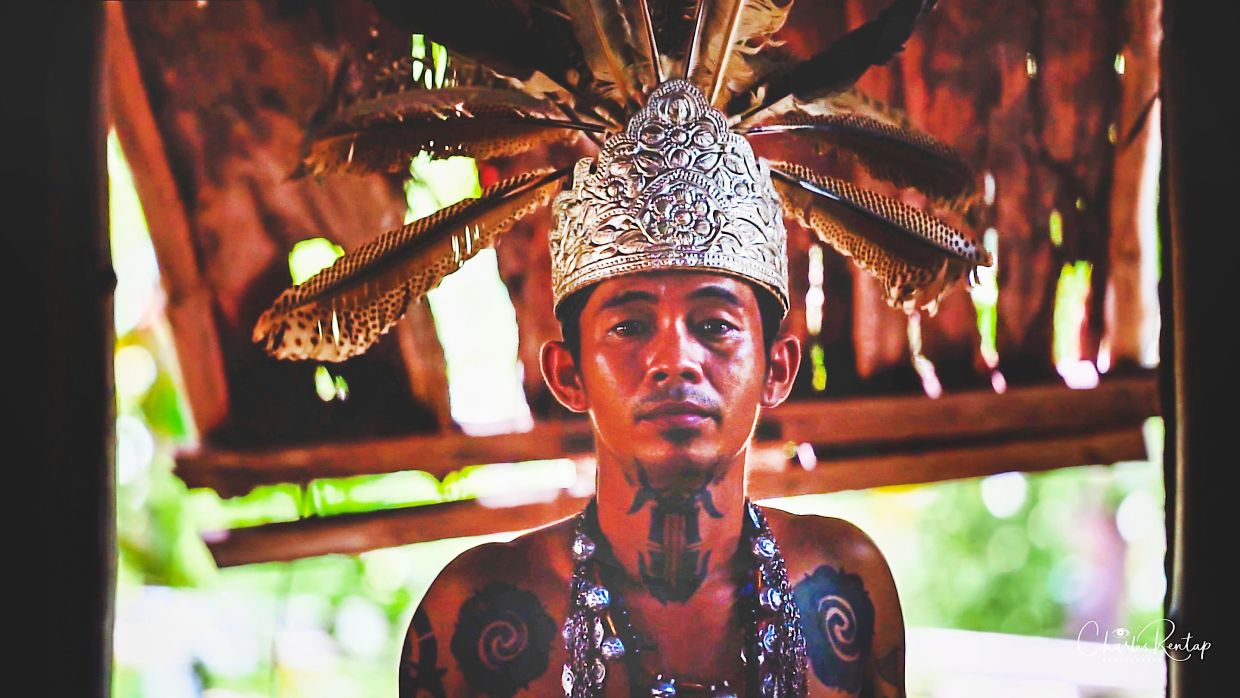 Nandong and Mclean’s Dream Wanderer: Young Keepers Of Tradition is a multimedia project highlighting traditional music from Sarawak. This work is a continuation of Nandong’s Dream Wandering With Guardian Spirits Of Borneo animation which was part of last year’s Sensorium Of Inversion/Immersion multimedia exhibition at REXKL.

“What is crucial now is to look for ways to think and imagine outside of the conventional archetypes of Orang Asal cultures and communal histories – to venture beyond the images of jungle and systemic disenfranchisement and dream of joyful becomings and resilience,” says Chiu.

In Jesse’s case, he wishes to continue his exploration of the bundusan. He feels his work is not complete yet and there is much more to discover about why the bundusan is so integral in Kadazan-Dusun life.

“There will definitely be Finding Bundusan part two... but I’m not sure if it will be in a film format,” he says.

Jesse also plans to have a screening of Finding Bundusan in KK later this year.

“I hope that when people watch the film, it will bring up memories and stories about the tikar bundusan and that there will be an effort to learn more about it.”

“For the people in West Malaysia, perhaps when they watch Finding Bundusan, there will be a solidarity, that we have something in common, a plant that is worth talking about and its potential in solving environmental issues,” concludes Jesse.

'Epistolaristics' is on at GMBB, Jalan Robertson in KL until June 5. Exhibition hours: 11am-6pm. 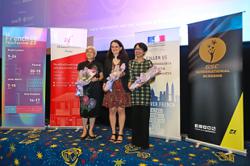