In English the average person speaks about 7,000 words a day. What if we made a resolution to add 20 more to our everyday vocabulary. Photo: AFP

The new year means new words to add to our vocabulary.

In English the average person speaks about 7,000 words a day. What if we made a resolution to add 20 more to our everyday vocabulary.

Blob: Be careful not to confuse this word with the bob, a hairstyle that regularly goes in and out of fashion with new variations. Blobs fascinate scientists, who claim that they can be the source of major discoveries. Endowed with fascinating powers, blobs are composed of a single giant cell capable of moving, learning and even transmitting knowledge to their fellow creatures. However, it is difficult to characterize them: they are neither animals, nor plants, nor mushrooms. In their natural state these organisms live in forest litter.

The boomerang generation: Not so long ago, young adults who returned to live with their parents were looked upon with suspicion. They were even regarded as failures. But things have changed with the pandemic and we are now collectively rethinking the relationships between generations – good thing!

Cheugy: This word went from a few references to everywhere last year in the United States, particularly on TikTok. And it could well replace the famous “Ok, boomer.” The term refers to people who follow trends considered cheesy or out of date and embrace it. And indeed, haven’t we all one day felt like taking out an old pair of Converse or a lumberjack-style plaid shirt out of our closet and wearing them unabashedly?

Cryptocurrency: Bitcoins, Ethereum or Ripple? Haven’t we all at one time or another dreamed of making a fortune with one of these digital currencies? Also known as “virtual money,” this new form of 100% dematerialised currency allows for the exchange of assets between individuals without the intermediary of a bank and without paper support. Currently, there are more than 6,000 different cryptocurrencies in the world.

Cycle logistics: Starting in 2020, bicycles have created a mini revolution on the streets of many cities. First there was the idea of the commuter bike for going to work. Now it’s time for “cycle logistics”, specifically referring to delivery by cargo bike. These strange-looking bikes, capable of carrying dozens of kilos, are increasingly used for last-mile deliveries because they are fast, agile and able to thread their way through the jungle of cities.

De-consumerism: The notion that gave rise to deconsumerism was theorised by English researcher Chris Goodall, known for his term “peak stuff,” and described by the French author Cécile Désaunay in the essay “La société de déconsommation: la révolution du vivre mieux en consommant moins” (The deconsumer society: the revolution of living better by consuming less), published in February 2021. The principle is simple: to adopt a thoughtful, considered approach to consuming, for instance by focusing more on one’s needs and by privileging quality over quantity. In concrete terms, this can be illustrated by choosing to give fewer gifts at Christmas or to opt for second-hand purchases.

Frugalism: The term refers to a lifestyle of saving money with the intention of working less and enjoying life to the fullest. This movement first emerged in the United States, where it is known as “Financial independence, retire early” (FIRE). Because for many people, the purpose of this approach is to retire as early as possible! At the age of 50, or even 40, if finances permit.

Gender fluid: Gender identity continues its revolution. We no longer speak only of “feminine” and “masculine.” Some people willingly embrace the feminine and the masculine or simply wish to free themselves from these two concepts altogether. Hence the increasing use of the terms “genderfluid” and “non-binary.” A gender identity that is getting increasing visibility in the media in recent years, including in the second season of the series “Sex Education”, released on Netflix in September 2021. 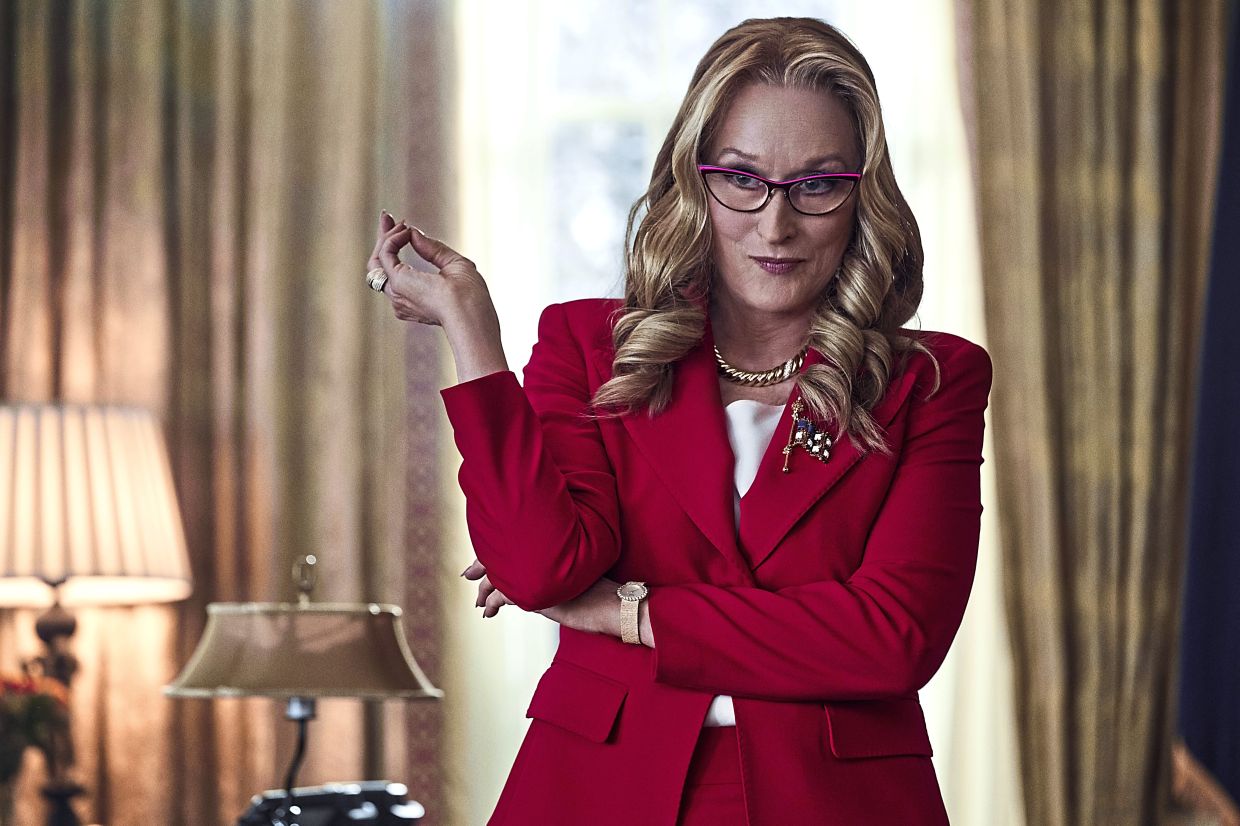 Meryl Streep is regarded a ‘GOAT’, the acronym for Greatest Of All Time by Internet users. Photo: AP

GOAT: What do Meryl Streep and Tom Brady have in common? Internet users call them both “GOAT,” the acronym for “Greatest of All Time.” This expression appeared in the 1990s but has recently got more mileage thanks to social networks. Rafael Nadal and Eminem are also considered GOATs in their respective professions. However, be careful not to confuse it with “goat,” which is also sometimes used as a short form of “scapegoat.”

Infodemic: Fake news, misinformation and disinformation are under more scrutiny than ever before. This word refers to a mixture of both accurate and inaccurate information on a subject. The overabundance of information online and offline has a direct impact on our ability to understand the stakes of a phenomenon as complex as the pandemic, climate change or the political climate.

JOMO: This acronym, in direct opposition to FOMO (fear of missing out) refers to the “joy of missing out,” the joy some people can feel when they don’t go to all the events they’re invited to. Don’t want to attend your mailman’s nephew’s christening or your aunt’s distant cousin’s birthday party? Don’t be ashamed to decline the invitation and embrace the JOMO attitude.

Metaverse: Contraction of “meta” and “universe,” this new term describes a perfect replica of our world, but in a 100% digital version. A parallel universe in virtual reality, only accessible via the internet. While the idea of the metaverse is only slowly taking shape, it promises us interactions free of all physical constraints.

Mys: “Hygge” in Denmark, “Niksen” in the Netherlands... Northern European countries are champions when it comes to philosophies of life centered around well-being. The Swedes also have one: “Mys.” Derived from the Swedish word “fredagsmys” (which can be translated as “cozy Friday”), this concept simply consists in taking time for relaxing enjoying the good life simply, for example by tasting one’s favorite foods or by allowing oneself an evening at home but away from screens. An art of living that is reminiscent of the famous mantra “Hakuna Matata” of Timon and Pumbaa in The Lion King... and which applies perfectly to this beginning of the year as the pandemic continues to weigh on us.

Neopronouns: Do you think you know all the pronouns? Think again. Although many individuals wishing to get away from binary pronouns use the gender-neutral “they/them,” some others choose not to, either to avoid singular/plural confusion or because they want to express something about themselves.You may be used to hearing and using sentences like, “I love the new album by Sam Smith; they’re my favourite artiste,” but there are others such as ze, per, ey, e... as well as a system of noun-self pronoun which uses an existing word of the individual’s choice. NFT stands for non-fungible tokens, and Collins Dictionary made it its word of the year in 2021. Photo: AP

NFT: Standing for non-fungible tokens, Collins Dictionary made it its word of the year in 2021. But it’s a safe bet that few of us really understand what this acronym is all about, referring to digital objects whose authenticity is verified by blockchain technology. It may sound very technical, but they allow you to become the official owner of tweets, memes and GIFs... and to be able to openly brag about it on social networks. #Class.

Plasticrust: Granted, this word is not likely to be part of your daily conversations. But you’re increasingly likely to say it if you are walking on the beach and see a strange blue tint embedded in the rocks of the coastline. These coloured fragments actually correspond to plastic microparticles released by the oceans. The phenomenon was discovered in 2016 by Portuguese scientists during an expedition on the island of Madeira. And, unfortunately, this is probably not the only place on the planet where these plastic crusts can be seen.

Slow working: Working more to earn more is nothing new as a concept. But what if, in 2022, we considered the principle that working less can allow us to be more efficient? This is the ideology of “slow working.” Goodbye to the pressure of deadlines and endless cycles of urgent projects, this is about taking our time, much as is done with “slow cooking” or “slow travel. Slowing down is without a doubt “the new cool.”

Web3: The average internet user has never heard of Web 3.0, while technophiles can’t stop talking about it. It refers to the idea that cryptocurrencies and the blockchain could help decentralise the Internet. The platforms and applications built on Web3 will not be owned by a central player, but will belong to the users themselves. Nothing short of a democratic revolution.

Woke: This word has been around for a few years of course, but you’ll be hearing even more of it. While it started being used in the US in 2014, it was heard by many for the first time in 2020 when the Black Lives Matter movement gained momentum. “Wokeness” comes from the English verb “wake” and refers to the awakening of consciousness around societal struggles such as feminism, anti-racism or decolonialism. It has become common to hear it bandied about by the right pejoratively in the culture wars.

Zennials: You’ve heard of Millennials and of Generation Z. Now it’s about the Zennials. This micro-generation refers to “adulescents” born between 1992 and 1998. They integrate characteristics from Millennials and Gen Z, much to the delight of brands. Addicted to TikTok and concerned about the environment they embrace second-hand goods as well as having cheugy attitude. Difficult to define? Yes, but it’s not problematic for them! — AFP