One momentous comic book milestone that has surprisingly gone under the radar is the 60th anniversary of perhaps the most important comics family in history – the Fantastic Four.

With only a “meagre” number of variant covers (by that we mean fewer than 10) for its 60th anniversary issue (Fantastic Four Vol. 6 #35) and only two tribute editions, it certainly looks like Marvel Comics have forgotten how to throw a party.

That’s a shame though, because when it comes to Marvel Comics, the FF is THE team that kickstarted the entire Marvel superhero franchise! A special issue of 'Fantastic Four' #35 was released to commemorate the team's 60th anniversary.Yes, way before the Eternals, X-Men, Guardians of the Galaxy or even Avengers were around, the Fantastic Foursome of Mr Fantastic (Reed Richards), Invisible Woman (Susan/Sue Storm), Human Torch (Johnny Storm) and the Thing (Ben Grimm) were already revolutionising what superheroes can and should be like.

These days, most successful comic series require a cinematic (or television) platform to further elevate its popularity. But unfortunately for the Fantastic Four, they have been left behind as the Marvel Cinematic Universe (MCU) flourished with the likes of Iron Man, Captain America, and even Ant-Man forging far ahead in terms of popularity in the modern age.> From page 1

Sure, they’ve had three feature films, one bootleg video and four animated series, but unfortunately, the quartet are currently nowhere on the list of Marvel’s movers and shakers for the 21st century.

Fortunately, the team is now back in the loving arms of Marvel Studios thanks to Disney’s buyout of 20th Century Fox. Hence, Phase Four of the MCU offers Marvel’s pioneering team a chance for redemption to re-establish themselves as key stalwarts of the universe, with a Fantastic Four movie already in development.

This week, to commemorate the team’s 60th anniversary, let us remind ourselves why the FF matters, and see what the future holds for Marvel’s First Family.

Keeping up with DC However, the “true inspiration” behind the team’s creation is often linked to Marvel’s “Distinguished Competitors” (aka DC Comics, then known as National Comics) and their successful super-team, the Justice League of America, which was selling very well at the time. Hence, Stan Lee was instructed by his boss (Martin Goodman) to come up with a team of superheroes.

However, subsequent debates between Lee and Kirby (stretching from the 1960s to the 1990s) casts further doubt as to who was more instrumental in the team’s creation.

One theory links it with Kirby’s 1950 DC team, the Challengers of the Unknown, who shared some similarities in terms of fashion sense. In the end, it didn’t matter if they were inspired by the JLA or Challengers, as the FF managed to come up with their own unique identity.

Surprisingly, the FF was Stan Lee’s turning point. Had it failed, The Man would have called it quits and probably worked as a mailman (ala Willie Lumpkin).

To ensure this “What If?” moment never happened, Lee decided to write the FF differently from other super heroes books by giving them no secret identities, and injecting human emotions and personalities into the characters. This flow from being a dysfunctional to dynamic family infused a sense of realism into the team. 'Fantastic Four: Life Story' tells the story of the team in real-time as opposed to comic book time. Black Panther made his first appearance on the pages of Fantastic Four.The FF acronym also stands for the team’s “First Family” status in the Marvel universe. Despite not being called “Earth’s Mightiest Heroes”, the FF’s many “first achievements” places them in a league of their own.

However, one accolade that is sometime uncredited to the FF is its role in spearheading the Silver Age – a new heroic age for not just the Marvel universe but also the DC universe.

Prior to the FF’s debut, Marvel specialised in western and romance tales, while DC’s books seemed to have hit a plateau.

The FF’s introduction led to the proliferation of more superheroes and widespread interest in this genre.

To add to that, the FF not only kickstarted the Silver Age, but also helped revived interest in the Golden Age by offering a reboot platform for key Golden Age characters, ie Namor the Sub Mariner and the original Human Torch.

With more than a 150 million copies of Fantastic Four literature sold since 1961, there are many wonderful reading materials that are readily convertible to cinema scripts, in case the writers of the upcoming FF movie need some inspiration.

For starters, in case the origin stories of the last three FF movies weren’t enough, the new movie could stay true to the 100-plus original stories produced by Lee and Kirby. Collectively they provide good guidelines on the team’s formative years, ranging from origins to introductions and offer many groundbreaking moments (coming of Galactus, Thing Vs Hulk, etc).

Then, there’s also Byrne’s epic 1980s run that practically redefined the role of the FF on Earth and the Universe.

If we are lucky enough to see a worthy sequel, the writers could also draw from the iconic Mark Waid run from 2002-2005, the Mark Millar run (Vol.3 #554-#569), Jonathan Hickman’s run (Vol.3 #570-#611) and even the short-lived 2012 Matt Fraction run, all of which provide for many hard hitting tales that clearly justify the FF’s raison d’etre alongside other Marvel super teams. Mark Millar's run on the Fantastic Four title would make for a great cinematic story.

With the MCU going big into the Multiverse and setting up the time-travelling Kang The Conqueror as the next Big Bad Villain, the FF couldn’t have come at a better time, as the villain known as “He Who Remains” is intricately linked to the FF.

In fact, the official 60th anniversary issue of Fantastic Four (#35) sees multiple iterations of Kang going back in time to fight the FF in different eras.

While the new movie should not only exorcise all the past FF-movies, it should also most importantly ensure that more FF-elements are infused into the MCU. 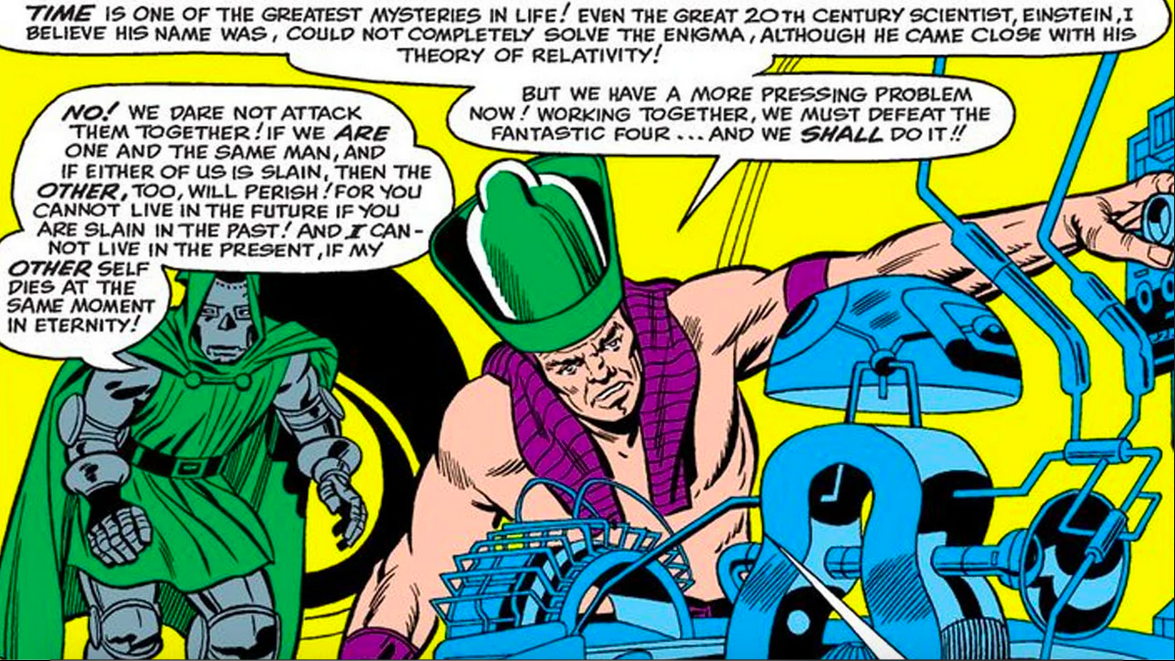 Kang the Conqueror and Dr Doom would be a formidable villain team-up for the MCU Phase 4 heroes to face.

At present, we have already had a taste of the Black Panther, Ronan the Accuser, the Watcher, Kree and Skrulls – all originating from the pages of the FF. Imagine what the presence of Galactus (not in cloud form though) and Dr Doom can do to fill up the vacuum left by Thanos.

Tony Stark’s demise also leaves Bruce Banner as the sole survivor of the MCU’s Brain Trust, and Reed’s “solve everything” philosophy should fill that gap plus provide some logic to Dr Strange’s mystics and the brute force available in most of the key MCU characters.