After a spate of delays and setbacks, contemporary artist Yeoh Choo Kuan’s This Is How It Is monograph has now been published. After working on this book for three years, the initial excitement might have somewhat waned for the artist, but in its place is a sense of accomplishment and familiarity.

“It was like greeting an old friend, when I was finally able to hold the monograph in my hands. It was a strange sensation to realise that some of those ‘big’ feelings I had over the course of working on this book were simply over romanticised, like an emotion trap, ” says Yeoh, 33, in a recent interview.

“It got me thinking, how could we actually identify ‘genuine’ feelings, if any? Regardless, I can say that 10 years of art making is simpler than making this book – the former is just about working hard, while the latter requires blessed luck to have a good team behind it, ” he adds.

This Is How It Is, published by Richard Koh Fine Art, is a hefty tome, filled with essays, conversations with the artist, and images of works spanning the last decade or so.

We also read about how, as a kid, Yeoh carefully tore up a birthday card he had made for his mother, before she got to see it, before painstakingly putting it back together.

“I like to think that it was my very first artwork – inclusive of drawing, sculpting and installation – that was even interactive. It was about deconstructing and reconstructing the love between a mother and her son, ” he says in the book. Yeoh’s 'This Is How It Is' monograph, published by Richard Koh Fine Art. Photo: Handout

Yeoh might have studied art formally, but he wasn’t thinking about pursuing it as a career then. Instead, after graduating, he backpacked around Australia and Indonesia, worked on a dive boat and briefly contemplated becoming a diving instructor.

Somewhere in the mix was a flurry of museum visits in France, of which the Centre Pompidou in particular made him see creativity and contemporary art in a whole new light.

There was a point in the past where he saw artistic practice as separate from “real life”, arts writer and curator Naima Morelli notes in this monograph.

It is hard to imagine that this has not changed.

In fact, one might even say that these days, Yeoh sees art in everyday life. Just ask him about his latest bread making venture, video performance work and recent observations, particularly during the pandemic where, in his case, art and creativity gets more time and space to brew.

For Yeoh, the launch of his monograph was supposed to be accompanied by a dance performance against a backdrop of his paintings.

However, with the current lockdown, this event had to be cancelled.

Yeoh has taken it as an opportunity to expand on this project. The result is a video performance piece, with moving dancing silhouettes against a large black and white painting from his Streaming Mountain series. 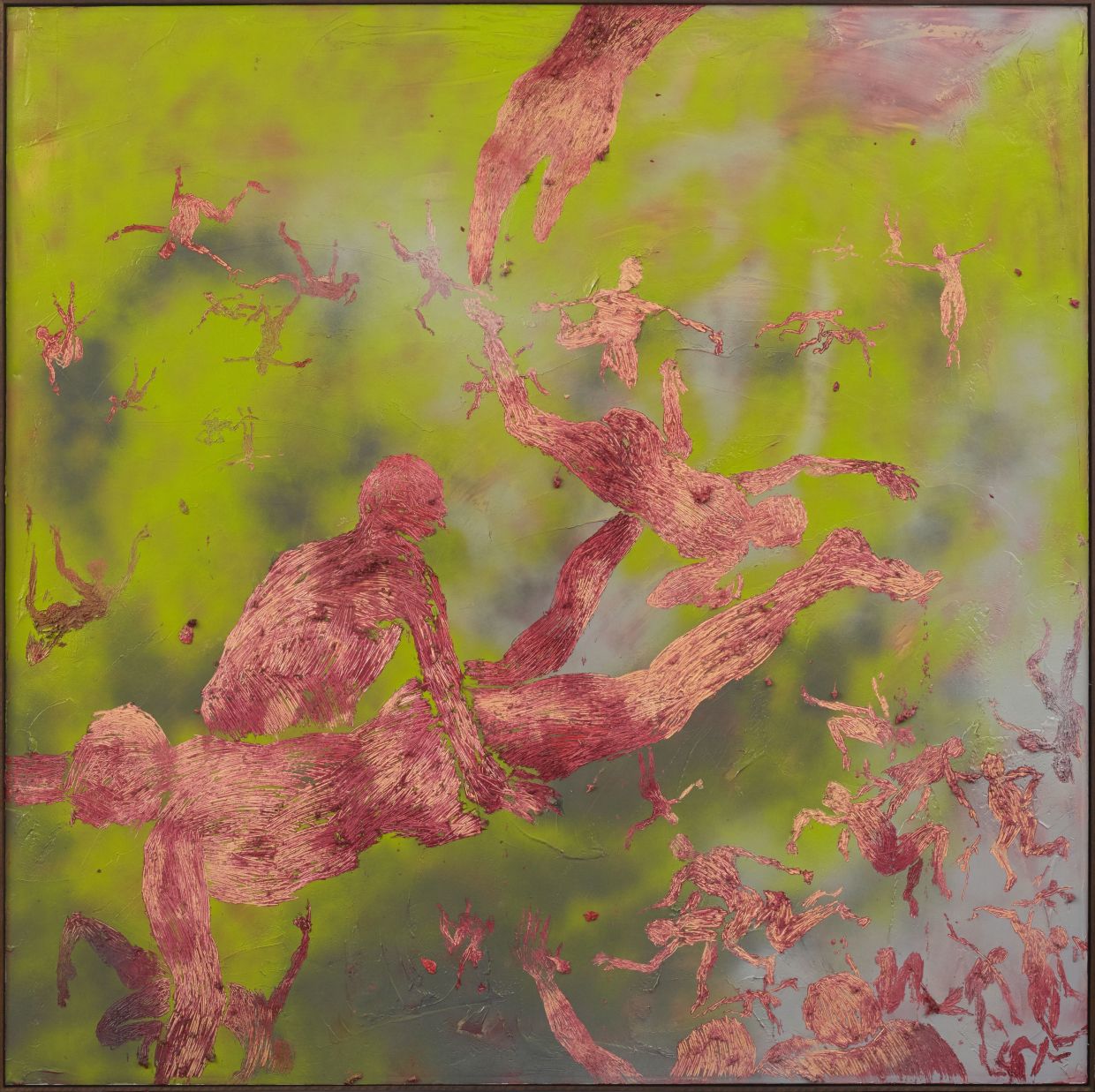 “Instead of merely moving the presentation platform from live to virtual, I decided to expand on the initial idea and include some theatrical elements, which I have always been interested in but have never explored in my practice, ” says Yeoh.

Together with videographer/editor Muk Lee, Yeoh added more dimensions to the backdrop. The video work has choreography by performing artist Lee Kien Fei (better known as Faye), with music by Wong Foo Jeng. (Wong recently released his Quiet Night Thoughts album, with Yeoh designing the album cover with his art.)

Yeoh is also working on showcasing a collaborative project with the Mah Meri community, to be presented at APW in Bangsar, Kuala Lumpur, sometime later this year, depending on the pandemic situation.

“It is based on the idea of the triangular relationship of nature, human and faith. Nature worship is a big part of the Mah Meri indigenous practice and I think it will be a nice catalyst for my Malaysian Chinese landscape art and their ritual performances to come together, ” he says.

It starts at home

Art aside, Yeoh has been keeping busy this past year with personal projects and collaborations, including Chinese tea brewing, cycling and sourdough baking.

He also set up a tea brewing corner in his studio.

“It is part of my routine now to drink Oolong tea before starting work in my studio. To calm and focus the mind, I go for raw Pu-erh tea. When it is raining, I drink ripe Pu-erh tea for its medicinal benefits, ” he reveals. 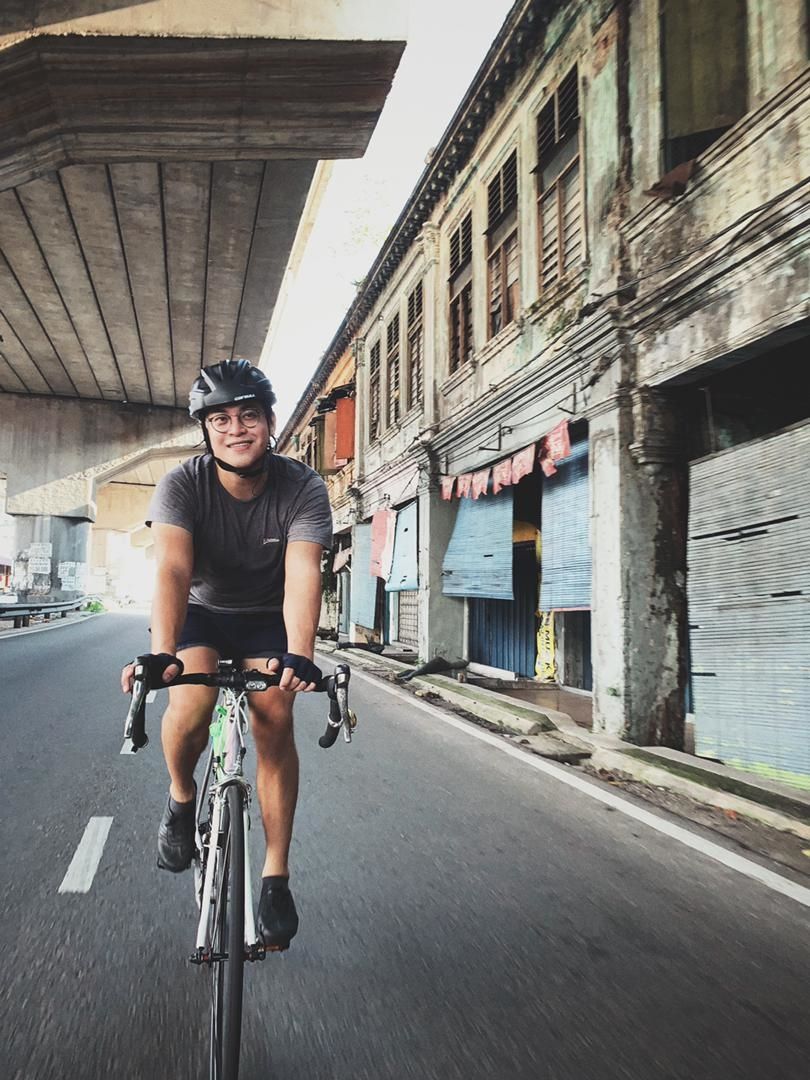 Yeoh has recently taken up cycling and he can't wait for the pandemic situation to improve to get back on the road. Photo: Ng Chor Guan

Yeoh even got himself a secondhand bicycle last year, with off-road cycling trips on the cards.

“During this time, there have been almost zero social events, but my art has been busy socialising and having some interesting conversations. I am one to be easily anxious when I have too much free time.

“The past year has been one of the most interesting periods of my life, it feels fast paced in a very compact way. These three new activities – tea, bread and cycling – were best to start during a pandemic as they require lots of time, continual engagement and a certain concentration on the body.”

As for the home bake business (@slower.dough on Instagram), it is a joint effort between him and his wife, Tan Min Li, where they work together on bread making. She is usually done with the baking by the early afternoon, and Yeoh takes over with the deliveries.

Tan is a piano teacher who, due to the pandemic, spent more time sitting out on her classes than actually conducting them. When she first started baking sourdough bread and cookies, it was meant for the family’s own consumption. While his wife Tan Min Li does all the baking, Yeoh helps out with the research and development, as well as the bread deliveries. Photo: Muk Lee

“It started for fun and then the business venture idea set in because she felt the passion she has in sourdough making could be a substitute for piano tutoring as a job.

“We test baked a lot and ended up with more bread than we could eat, so we started giving them away to friends and family. It is really her project; she fully handles the baking while I am a freeloader who needs to give back by doing the deliveries, ” says Yeoh with a laugh.

While there are some people who react in disbelief or surprise that he is doing a “delivery person’s job”, he sees it as simply a practical solution.

“Most artists work hard to have a sustainable art career. I think people react that way to me doing deliveries because I have been a full-time artist for so many years, and have been doing alright. To them, it looks like I ‘reversed’ myself. But to me, art comes from life.

“I see this as a life experience instead of a job. Maybe it will inspire me in making art someday, who knows? Plus, the delivery part is pure enjoyment for me. I listen to podcasts for new knowledge during the drive, or admire some beautiful houses in gated housing estates that I now have access to because I have the magic phrase ‘hantar makan’ (delivering food) for the security guards.”

When Yeoh talks about bread, he first paints a picture. He describes how building a bread flavour profile is like a music composition, where different layers of flavour come together, like a music score.

Sometimes the bread – visually or otherwise – would remind him of specific artworks, and he will post them online.

Case in point, they recently posted a photo of bread baking in their new oven, alongside an image of Romanian sculptor and photographer Constantin Brancusi’s iconic sculpture The Kiss from the early 20th century, because of the similarities in form.

“There is always space for a bit of art sharing on social media in relation to bread, ” he says.

Who would have thought.

Use foodpanda Voucher to save on your bread deliveries

yeoh choo kuan , monograph , this is how it is , richard koh fine art , art book , pandemic