In a tarot deck, every card has its own imagery, symbolism and story. Take the "Five Of Swords" card, for example, it is very commonly used to signify defeat.

In the upcoming South-East Asian Myths and Stories (Seams) Tarot project, this card is fittingly illustrated with a scene from one of the most famous conflicts in Malay folklore: the defeat of Hang Jebat by his friend Hang Tuah.

Another card, the Six Of Swords, has connotations of being aided, and having solutions found. The image used to depict this card is the Princess Hang Li Po, who was aided by the Laksamana Cheng Ho in her trip from China to marry the Sultan of Melaka.

According to Rowen Ong, Singapore Tarot and Cartomancy Association chairman, it is important that today’s generation appreciate and learn about these ancient myths.

He has embarked on the Seams project, which unites artists across the region to create a tarot deck based on the ancient myths and stories of South-East Asia.

“Classical myths and stories paint pictures of a particular place. They give a particular reason why a hill was named; or the story behind a particular street name. Each classical myth contains moral lessons and reflect on the culture of the people from that particular part of the land, ” says Ong in a recent interview.

“Classical myths – prior to the age of colonial development – are untainted by the Western influences. Hence they have very strong cultural heritage for the people of the land, ” he adds. The 'Lovers’ card is based on the Malay classical story of Ulek Mayang, where a sea-princess fell in love with a fisherman. Photo: Rowen Ong

The project kicked off in January this year, following a discussion Ong had with Filipino tarot artist Lynyrd-Jym Marquez Narciso. The two brainstormed what could be done to bring together the tarot communities of the region, and Seams was mooted.

Each Seams tarot contains 80 cards. These are the 78 cards of the tarot, comprising 22 Major Arcana cards and 56 Minor Arcana cards. The other two are a cover card and a special “Happy Squirrel” card by Filipino artist Pepot Atienza. That card is based on the Borneo legend of the vampire squirrel.

There are eight cards based on Malaysian myth, namely the Five Of Cups (Mount Kinabalu), Five Of Swords (Hang Tuah and his fight with Hang Jebat), Justice (Makam Mahsuri), Lovers (Ulek Mayang), Seven Of Cups (Puteri Gunung Ledang), the Six Of Swords (Princess Hang Li Po meeting the Sultan of Melaka), the Three Of Cups (Telaga Tujuh Waterfalls) and the Three Of Swords (Puteri Santubong and Puteri Sejinjang).

“As each country artist knows their country’s stories the best, we had a brainstorming session with them for one month. Initially we assigned to each country a certain number of myths, but we were unable to get artists from some of the nations due to language barriers and not having good contacts.

“We did some research on the myths for those countries and found those which are most relevant.”

Ong himself contributed the artwork for "Strength", where he used ink and markers. The card depicts the sighting of the lion by Sang Nila Utama, and the naming for the country of Singapore. 'Page Of Wands' featuring the Burulakaw of Philippine mythology, the women are barely 1m tall with flaming hair. When you see shooting stars at night, those are the Burulakaw carrying messages from one god to another. Photo: Seams Tarot Facebook

“As it is a South-East Asian project spanning five countries, I needed to co-ordinate with the artists. In addition, there was the Myanmar military coup and communication with the representatives from that country was challenging, ” he says.

“In addition, there was an incident where one of the artists needed to recover from Covid-19, and we needed another artist to finish the initial art which he was unable to complete.”

Despite the obstacles, Ong and his team persevered, and managed to complete the deck. The group has since launched a page for it on fund-raising site Kickstarter, for both the deck and a South-East Asian Tarot conference planned for Singapore in 2022.

The Kickstarter campaign was launched on May 25 (World Tarot Day), and goes on until July 12.

“The Seams tarot has very good illustrations and art from the region. You could learn about myths and stories reimagined in a unique and fresh yet relatable fashion, ” says Ong.

“People who buy the Seams tarot would be able to appreciate the art and culture of the different nations in South-East Asia. It also showcases a region which is rich in harmony, culture and diversity.” 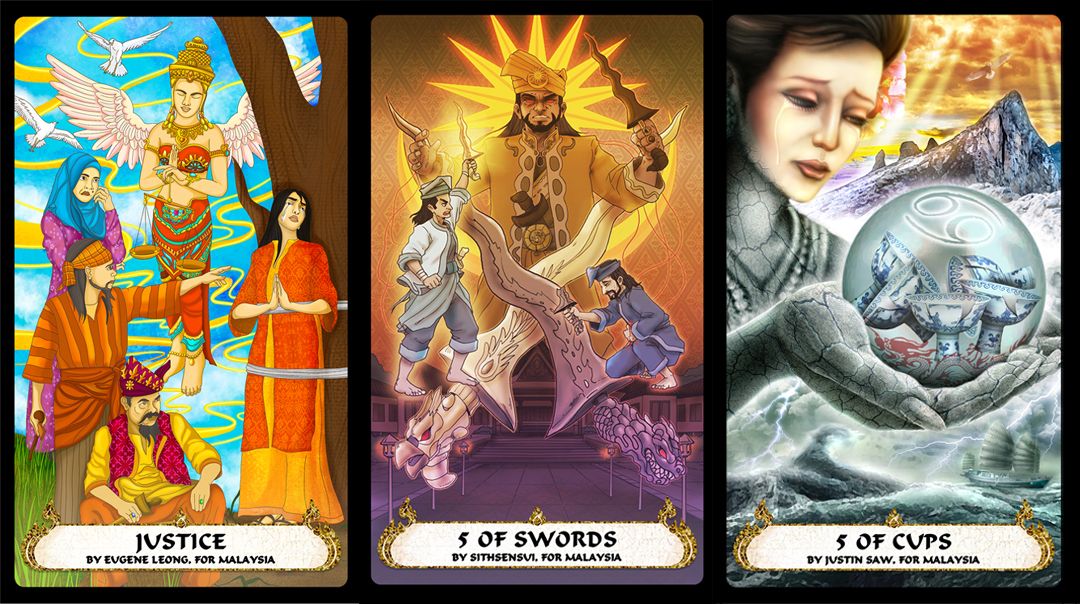 The 'Lovers’ card is based on the Malay classical story of Ulek Mayang, where a sea-princess fell in love with a fisherman. Photo: Rowen Ong

The 'Five Of Cups' card is based on the story of Mount Kinabalu. Photo: Rowen Ong

The 'Justice' card is based on the Langkawi legend of Mahsuri. Photo: Rowen Ong

The 'Five Of Swords' tarot card is based on the fight between Hang Tuah and Hang Jebat. Photo: Rowen Ong

'Page Of Wands' featuring the Burulakaw of Philippine mythology, the women are barely 1m tall with flaming hair. When you see shooting stars at night, those are the Burulakaw carrying messages from one god to another. Photo: Seams Tarot Facebook