Pandemic art sales: prettying up the walls we’re staring at 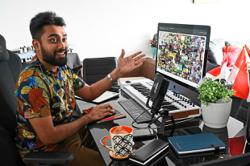 If you’ve been watching experts and commentators appearing on television from their homes, their increased attention to decor might look familiar: In the early days of lockdown, they, like many of us, sat in front of blank white walls, while now their homes frequently display prominent artwork.

“Cinderella has nothing on these people, ” said Claude Taylor, who created the Room Rater Twitter account with his fiancee, Jessie Bahrey. “I don’t think art is even something people thought of in April.”

Room Rater scores speakers’ set-ups on a 10-point scale for details like lighting and camera level. Good artwork can boost a score. For example, Washington Post columnist Eugene Robinson scored a 10/10 for appearing on Morning Joe in front of artwork by his wife, Avis Robison.

It seems many Americans who are stuck staring at their walls have decided the pandemic gives them a good reason to pretty them up.

My first hint at an uptick in art spending came last summer. When businesses shuttered and laid off employees in March, we braced for my artist husband’s sales to plummet. For a while they did. But then, his numbers didn’t just return to normal. They spiked.

I thought it might be an anomaly. My husband, John Tebeau, illustrates beloved bars; maybe people were buying his bar art because they missed their favourite watering holes?

But then friends who work at a framing shop said they were as busy last fall as at Christmas. Artists we know said they, too, were selling more than usual.

• an 80% increase in searches for stained glass window or wall hangings.

• a 46% increase in searches for sculptures.

Etsy doesn’t release data on actual sales. It’s fair to assume at least some of those searches were daydreams that never led to purchases, if my own time scrolling through listings for upstate houses I have no intention of buying is any indication. Room Rater scores speakers’ set-ups on a 10-point scale for details like lighting and camera level. Good artwork can boost a score.

Adobe Analytics does track purchases online, and those numbers are even more dramatic: Average daily sales of “art goods, ” which includes sculptures, artworks and frames, increased 134% between the pre-Covid-19 months of 2020 and last fall. Comparing September and October 2019 to the same two months in 2020, average online daily sales increased 109%. Adobe’s analysis of e-commerce sales includes 80 of the 100 largest online retailers in the United States.

Atiba T. Edwards has just the combination of experience to explain what’s happening. He worked in banking for several years and is also the co-founder of the arts non-profit FOKUS, which offers arts education, hosts art events and publishes an online magazine.

Edwards noted that many people who kept working during the lockdown suddenly weren’t spending money on travel, going out to restaurants or movies, or getting babysitters. They were probably home more than ever before, so they might have redirected some of that discretionary income to art.

Edwards is an example himself. He loves and appreciates art, but in the before times, he left his Brooklyn apartment early in the morning, went to work as chief operating officer of the Brooklyn Children’s Museum, then got home late after coaching basketball or going to an art event. Now he works more at home, and misses seeing art at work and elsewhere.

“I have hung six pieces in the last three months, ” he said. “People are seeing the benefit of surrounding themselves with beauty.”

Edwards has worked with hundreds of artists as executive director of FOKUS, trying to create accessible art experiences in non-traditional spaces. He believes the traditional art show or gallery experience feels intimidating to someone who doesn’t feel knowledgeable about art, while social media algorithms can serve up artists to peruse with no pressure to buy. Eden Stein appears with her son Luca at her gallery Secession Art & Design SF in San Francisco. Stein said making art sales during the pandemic has felt a little like a wedding reception: She has reconnected with friends and clients from throughout the gallery’s 13-year history. Photo: AP

“The newcomer can look at art at home and not have the feeling of it being unwelcoming, ” he said.

Higher unemployment rates caused by the pandemic mean many people, of course, don’t have the money to buy art now.

But for some of those still working, buying art can also be an attempt to help support others.

“I had people reaching out to buy a piece of art to save my gallery, ” said Eden Stein, owner of Secession Art and Design in San Francisco, which sells the works of about 70 creators. “That money not only supported my family, it supported the artists and their communities.”

Stein said making art sales during the pandemic has felt a little like a wedding reception: She has reconnected with friends and clients from throughout the gallery’s 13-year history.

Typically, Stein would host two or three events a month, while foot traffic to nearby restaurants and a music venue next door would also bring in new visitors. Instead, for the last year, she’s talked to many buyers by phone or arranged visits by appointment.

“This year has been really personal, ” said Stein. “If you can’t hug people, selling a piece of artwork feels a little like that.” - AP