Having witnessed the hardships faced by Sri Lankan children in rural areas whose villages have no library facilities, Dasanayaka got the idea for his library on wheels called "Book And Me." Photo: AP

During his leisure time, Mahinda Dasanayaka packs his motorbike with books and rides his mobile library – across mostly muddy roads running through tea-growing mountain areas – to underprivileged children in backward rural parts of Sri Lanka.

Having witnessed the hardships faced by children whose villages have no library facilities, Dasanayaka was looking for ways to help them.

Then he got the idea for his library on wheels.

He started his programme, called "Book And Me, ” three years ago, and it has become very popular among the children.

"There are some kids who hadn't seen even a children's storybook until I went to their villages, ” he said.

Dasanayaka, 32, works as a child protection officer for the government. On his off days – mostly during weekends – he rides his motorbike, which is fixed with a steel box to hold books, to rural villages and distributes the reading material to children free of charge.

"The children are very keen and enthusiastic, they are eagerly waiting for me – always looking for new books, ” Dasanayaka said by phone.

His programme is mainly centred in Kegalle, a mountainous region of the Indian Ocean island nation about 85km northeast of Sri Lanka's capital, Colombo, with poor villages scattered among tea plantations. He visits the villages once or twice a week to distribute the books. Children look to borrow books from a mobile library run on a motorbike by Dasanayaka, in a village in Kegalle district, about 85km northeast of Sri Lanka's capital, Colombo. Photo: AP

His collection includes about 3,000 books on a variety of subjects.

"Boys mostly like to read detective stories such as Sherlock Holmes, while girls prefer to read youth novels and biographies, ” he said.

So far, he said, his programme has benefited more than 1,500 children, as well as about 150 adults.

He began the programme in 2017 with 150 books – some of his own and others donated by friends, colleagues and well-wishers. He bought a second-hand Honda motorbike for US$162 (RM658). He then fixed a steel box on the bike’s pillion seat.

"I wanted to do something for children who are burdened with an exam-centred education. And to change the way kids look at society, to change their perspectives and broaden their imagination, ” he said.

Apart from giving away books, Dasanayaka also speaks to the children for a few minutes, usually under a roadside tree, highlighting the value of reading, books and authors. He then conducts a discussion on books the children have read, with the aim of eventually forming reading clubs.

His programme has spread to more than 20 villages in Kegalle. He also has expanded it to some villages in Sri Lanka's former civil war zone in the northern region, more than 340km from his home. 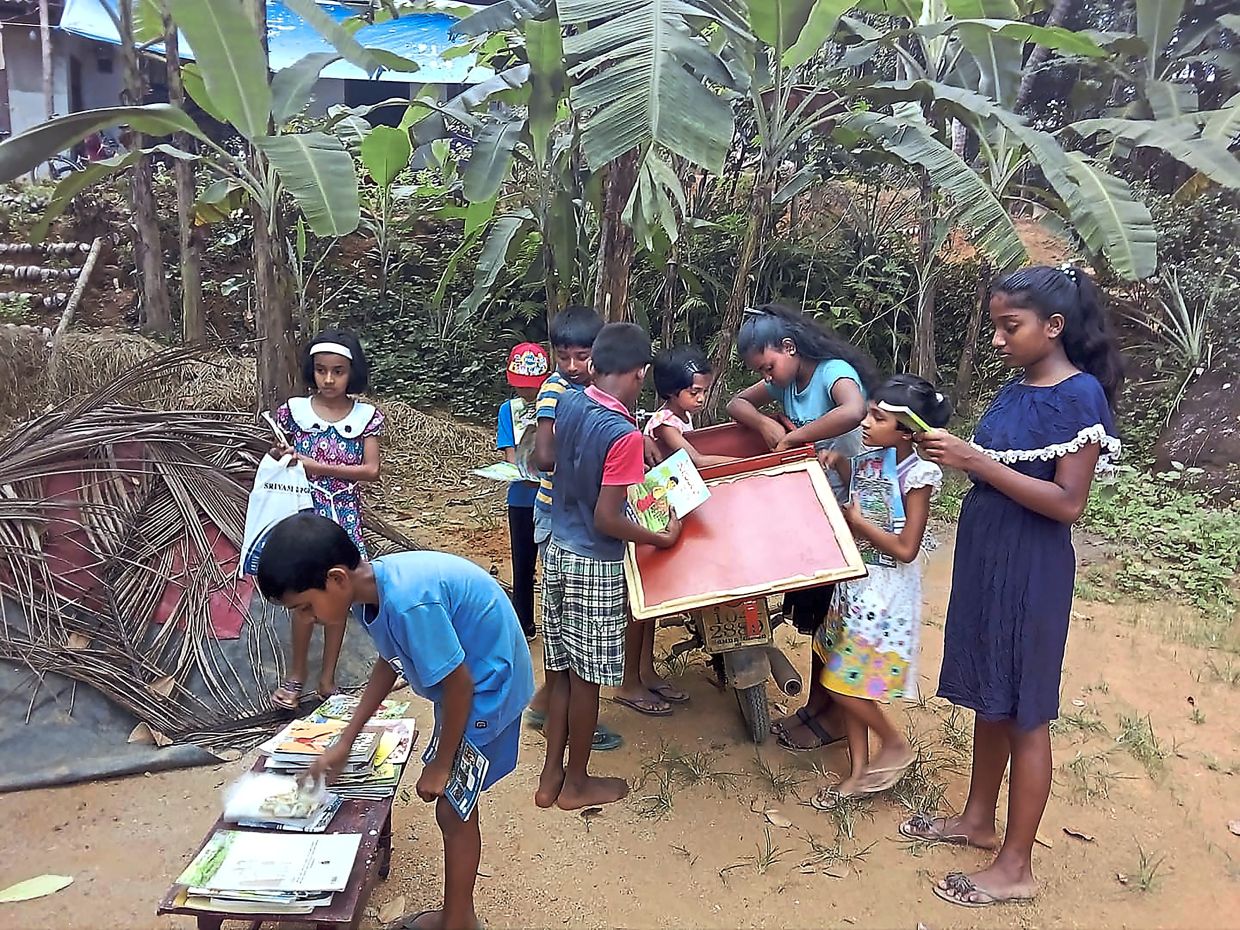 'My only happiness is to see that children read books, and I would be delighted to hear the kids say that books helped them to change their lives,' says Dasanayaka. Photo: AP

The long civil war ended in 2009 when government troops defeated Tamil rebels who were fighting to create a separate state for their ethnic minority in the north.

Dasanayaka, who is from the ethnic majority Sinhalese, believes books can build a "bridge between two ethnic groups.”

"Books can be used for the betterment of society and promote ethnic reconciliation – because no one can get angry with books.” he said.

He also has established mini libraries at intersections in some of the villages he visits, giving children and adults a place to share books. These involve installing a small steel box that can be opened from one side onto a wall or on a stand. So far, he has built four such facilities and aims to set up 20 in different villages.

While Dasanayaka spends his own money on his programme, he is not wealthy, with a take-home income of US$108 (RM439) a month from his job. He said he spends about a quarter of that on gasoline for his mobile library.

He lives with his wife, who is also a government worker, and their two children.

"I live a simple life," he said. "No big hopes, and I am not chasing after material values such as big houses and cars.”

"He has set a real example for society," Liyanage said. "With very little resources, he has done remarkable things, and his project has opened the eyes of many others to do similar things.” Mohomed Haris Shihara, 48, a nursery school teacher in the village of Kannantota, about 20km from Dasanayaka’s home, praised the programme, saying it has benefited about 100 children in her village.

"This is a great thing and it has helped to develop an interest among the kids to read books," she said.

"Also, the follow-up discussions on books have widened the children’s knowledge.”

Dasanayaka said he does not seek any monetary benefit from his programme.

"My only happiness is to see that children read books, and I would be delighted to hear the kids say that books helped them to change their lives," he said.