Fictional characters have been recurrent in Ise’s drawings informed by the visual vernacular of comics. Photo: A+ Works of Art

When contemporary artist Roslisham Ismail, better known as Ise, died 2019, there was a pending project that he was looking forward to sharing with the Malaysian audience.

This project, which he first titled Campur, Tolak, Kali, Bahagi, Sama Dengan (Add, Subtract, Multiply, Divide, Equals) in a notebook during a trip to Germany in 2016, was meant to be unveiled in 2019.

But it was not to be.

Ise died from health complications aged 46 in Kuala Lumpur in July 2019 and the exhibition was put on hold.

“As much as his artistic practice developed abroad, through participation in residencies programmes and international exhibitions, Ise was hoping to present his work at home in a solo project.

"He was seeking a more nuanced understanding of his practice in Kuala Lumpur and a recognition of his work in the local art scene," says Singapore-based curator Anca Rujoiu.

"In our initial discussions, this exhibition was meant to present a fresh project by Ise that could in equal measure pay justice to his specific art-making process and ways of encountering the world, ” she adds.

Rujoiu notes that doing a project at home always carries a different significance and that Ise was very committed to and ambitious about this endeavour.

So behind the scenes, work continued on Ise’s project after his passing.

“We aligned this exhibition with Ise's vision as much as it was possible. We followed his sketches for the installation, and his initial designs with Superfriends for the exhibition's visual identity, ” she says. It might have been a long time coming, but the ongoing Campur, Tolak, Kali, Bahagi, Sama Dengan (Add, Subtract, Multiply, Divide, Equals), at A+ Works Of Art gallery in Kuala Lumpur has attracted a steady crowd of art enthusiasts, longtime fans and newcomers eager to discover the Kelantan-born artist's legacy.

The exhibition, which ends on Jan 9, features 20 works from Ise’s Operation Bangkok series (2014), which have never been shown before, and five lightbox works (2018-2020), which is a collaborative project with comic artist Ibrahim Hamid (aka Pak Him).

A+ Works Of Art founder Joshua Lim concurs that while Ise is very well-regarded internationally, he is severely under-appreciated at home. He has participated in over a dozen major international shows and biennales, but he has not shown very much in Malaysia. His work has also been presented in group exhibitions from Indonesia and Istanbul to Berlin and Paris.

Ise’s last show in Malaysia, Ghost, was in 2010. Curated by Vincent Leong and Eva McGovern, this was a three-day showcase at 15 Jalan Mesui in Kuala Lumpur.

“In this project, Ise recorded the discussion of more that 60 people within and outside of the art scene in KL as they commented on ten collage he produced during a period of insomnia. The audio recording of these discussions were then converted into soundscapes and presented in the exhibition in place of the collages, ” says Lim.

In many ways, Campur, Tolak, Kali, Bahagi, Sama Dengan (Add, Subtract, Multiply, Divide, Equals) is an opportunity to get to know this prolific artist’s work better.

“The exhibition is a good representation of the spirit of Ise’s practice; the works on display were developed through collaboration, they showcase his unique storytelling approaches, and they represent how he often developed ideas through conversations with persons from all walks of life. He was great at connecting people. He would bring together interesting and diverse communities of collaborators, sometimes including persons from widely different social backgrounds, ” adds Lim.

In Operation Bangkok from his residency project at Bangkok University Gallery, Ise maps his encounters with the city and its inhabitants.

“From the abandoned New World Mall, Thieves’ Market, Crocodile Temple (Wat Chakrawat) to anti-government protests in Lumpini Park, to name a few, Ise guides us to places and events meaningful to those for whom Bangkok is home. We discover, through Ise’s eyes and interactions, Bangkok as a living city rather than a tourist destination on the global market," says Rujoiu. 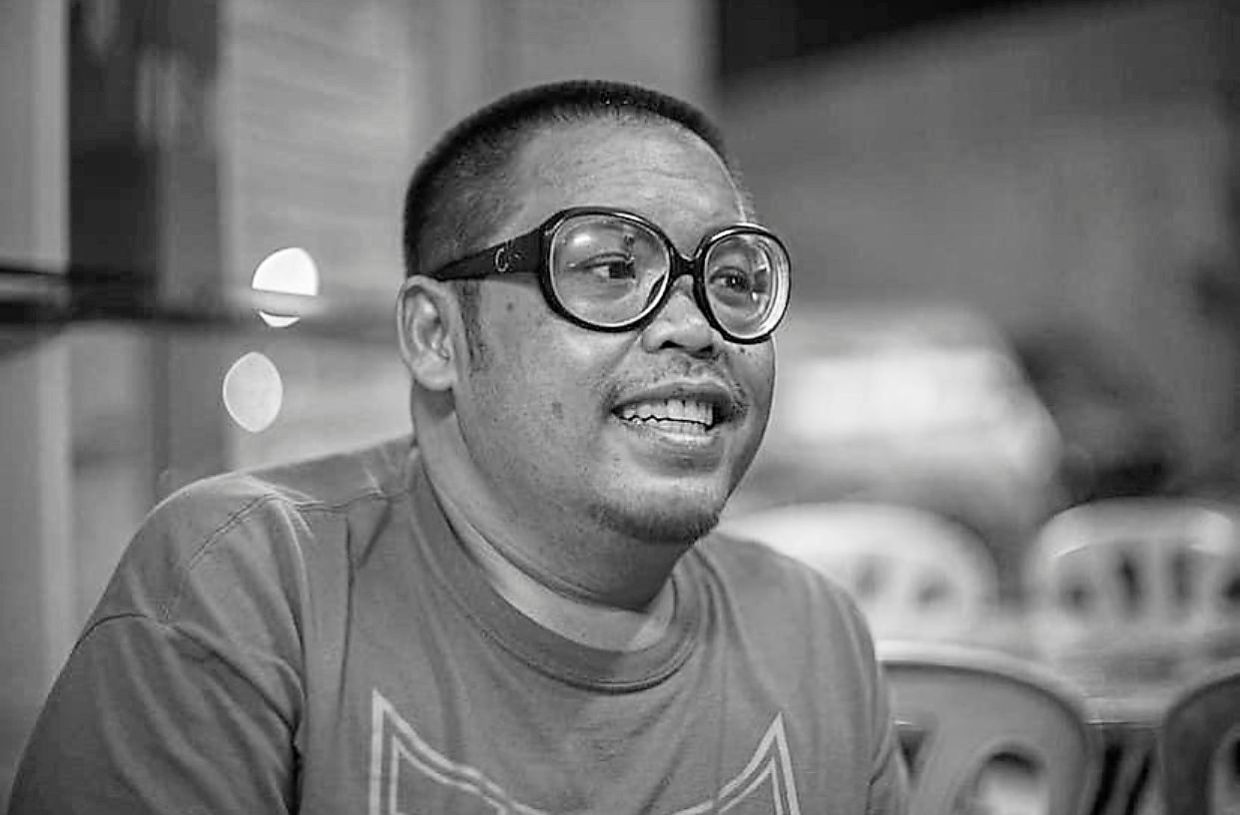 The late Ise was known as a great storyteller who told stories through his multidisciplinary approach to art. Photo: Hakim Hathma

"For instance, Ise was fascinated by the New World Mall, an abandoned shopping mall which became a flourishing fish pond. In Bangkok, Ise also attended and spent time with the anti-government demonstrators in Lumpini Park in 2014. There he came across the so-called ‘popcorn gunman’ who hid guns in popcorn to protect the protesters, ” she relates.

As for the mobile lightboxes, the graphic illustrations displayed in them captures some of Ise’s colourful experiences during his travels abroad, like how he was questioned for hours by customs officers in Christchurch, New Zealand, suspected of being a “drug designer”, got mugged at knifepoint in Barcelona, Spain, and stopped by the police in Jakarta right after Malaysia won a regional cup in a football match against Indonesia in 2010.

“All the works in this exhibition are marked by Ise’s social flair and penchant for storytelling. Although produced four years apart, the two bodies of work that constitute this project intimately interconnect. Seamlessly they capture Ise's art-making process, his distinctive ways of navigating the world and embedding the serendipity of life and social encounters in artistic practice," Rujoiu.

Ise was a nurturer and collector of personal stories, insights, experiences, anecdotes. This exhibition highlights how Ise transposed his social encounters and a vast body of informal knowledge into his work.

"I hope visitors can feel inspired by Ise's endless curiosity, playfulness, the high value he placed on social relations and the ways in which he produced knowledge, ” she adds.

There are two publications released in conjunction with this exhibition: an e-publication by A+ Works Of Art on Ise’s project, and a special issue of sentAp! (magazine) dedicated to Ise. In 2005, Ise and curator Nur Hanim Khairuddin founded sentAp! magazine.

This special issue, published on the occasion of Ise’s project, includes a series of interviews by writer Tan Zi Hao with curators Ark Fongsmut, Nur Hanim and Russell Storer; and an essay and a conversation with (Indonesian collective) ruangrupa by Rujoiu.

Campur, Tolak, Kali, Bahagi, Sama Dengan (Add, Subtract, Multiply, Divide, Equals) is realised in collaboration with Ise Parkingproject Foundation, with the support of A+ Works Of Art and the NTU Centre For Contemporary Art Singapore. It will run until Jan 9 in KL, followed by The Lab at NTU Centre For Contemporary Art Singapore from Jan 16 to Feb 28. More info here.