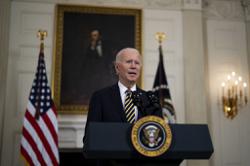 'We hope that this guide will not only whet your appetite for delicious Malay kuih but also will serve as ‘food for thought’, sparking your interest to delve into an exciting world of discovery of the intricacies of Malay heritage food, ' says Hidayah Amin. Photo: Handout

When Singaporean author Hidayah Amin was studying abroad many years ago, she found herself longing for the taste of local kuih.

Hidayah, a Fulbright Scholar, missed kuih so much, she started learning how to make them while living abroad in places such as United States, Britain and France. The lack of kuih also made her realise how she had taken these delicious local delicacies for granted, especially the ones baked by her grandmother and mother while she was growing up.

“Kuih” is a Bahasa Malaysia word used to describe bite-sized snacks such as cakes, biscuits, bread and porridge.

The term is used generically to mean Malay desserts.

Back in Singapore, it was easy for Hidayah to buy or order kuih from shops. But what would happen if a kuih maker were to die, with no successors identified to inherit his or her skills?

Would future generations be deprived of these delicious treats?

With these thoughts in mind, Hidayah set out to do her part in preserving this unique Malay food heritage.

The result is the charming book Kuih: From Apam To Wajik, A Pictorial Guide To Malay Desserts, published by Singapore-based Helang Books.

Don’t remember what they look like? The book, with illustrations by Jafri Janif, will jog your memory. Kuih: From Apam To Wajik aims to share the stories behind the various Malay kuih selected and how diverse this food can be. Each kuih has an entry devoted to it, with added cultural info and even WWII history for some (ubi rebus and ubi goreng). 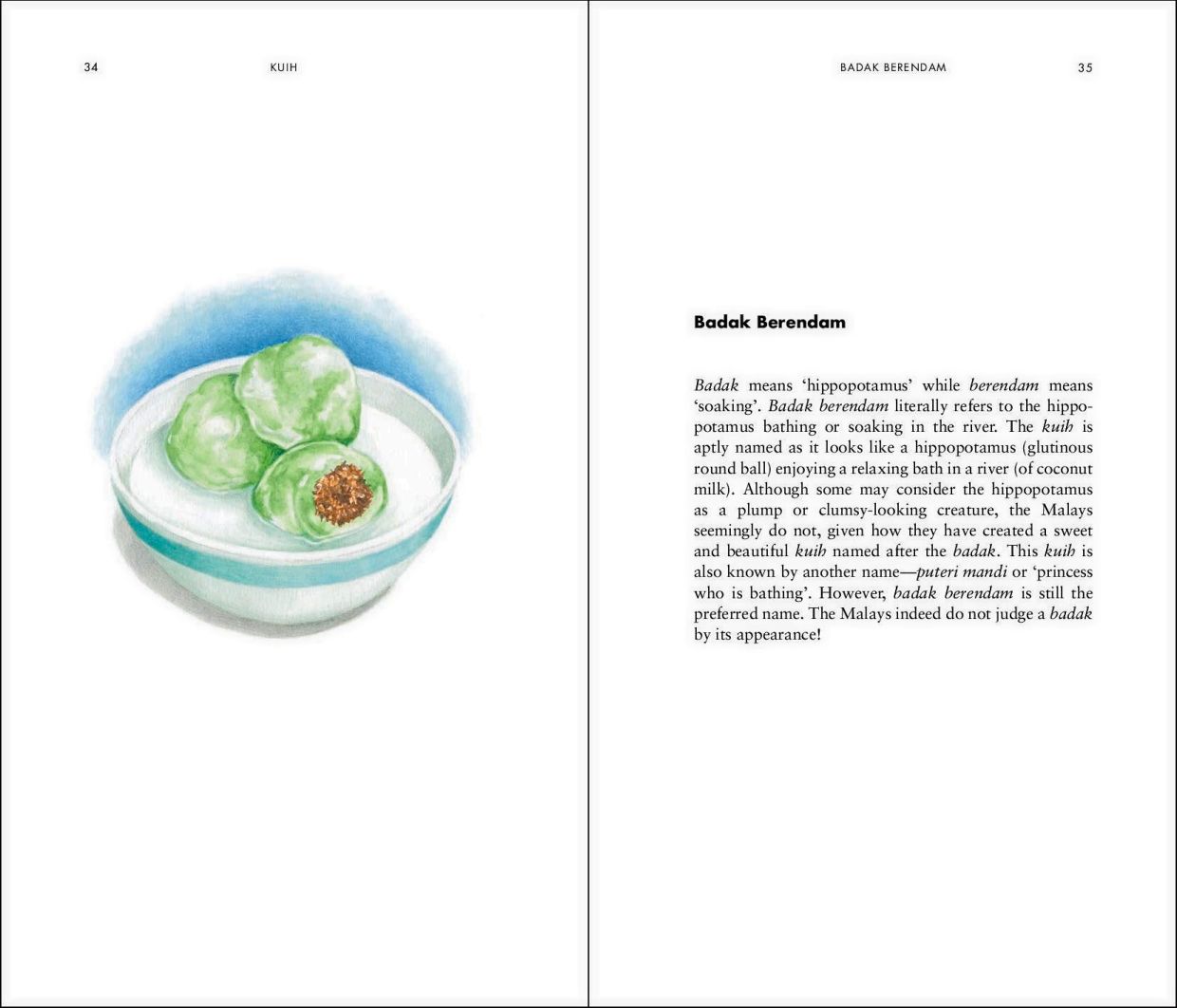 An image of badak berendam, an aptly named kuih as it looks like a hippopotamus (glutinous round ball) enjoying a relaxing bath in a river (of coconut milk). Photo: Helang Books

With a shared Malay heritage, this Singaporean book also mentions the Malaysian connections and histories when it comes to kuih.

For instance, kuih pauh dilayang, made with eggs, is a popular snack in Kelantan and Terengganu, while cek mek molek, kuih tahi itik (duck poop cake), kuih buah tanjung and lompat tikam are some Kelantanese favourites.

“We Malays love our kuih! In most households, there would be pencuci mulut or dessert after every meal. I remember growing up in Gedung Kuning in Kampong Gelam (Singapore), where my grandmother would always ensure that there would be some kuih spread out on the table during teatime, ” says Hidayah in a recent email interview.

“She would prepare some dessert or simply buy them from our neighbours in Kampong Gelam who sold kuih. There were also kuih sellers who made their rounds in the village, carrying trays or baskets filled with kuih muih, ” she adds.

“Kuih is ubiquitously present in almost all of the Malay festivities, wedding celebrations, thanksgiving feasts and even at everyday meals like breakfast. During Hari Raya Puasa, we would have kuih as kepala meja, serving it as the main dish at the table.”

The Kuih: From Apam To Wajik book focuses on the stories behind the names and origins of kuih, as well as the similarities between the kuih of different groups of people in the Malay diaspora. It does not contain any recipes, although readers can find them at a companion website.

Hidayah, a passionate entrepeneur and foodie, is also an award-winning author who has published seven English non-fiction books and seven children’s picture books since 2010. These include Malay Weddings Don’t Cost $50 And Other Facts Of Malay Culture and her children’s book The Mango Tree, which won the Hedwig Anuar Children’s Book Award 2015.

This 304-page Kuih: From Apam To Wajik book is the second book in her “Malay Heritage” series, the first being Bahasa: A Guide To Malay Languages. It will be followed, she reveals, by an upcoming book on the ghosts and spirits of the Malay world. 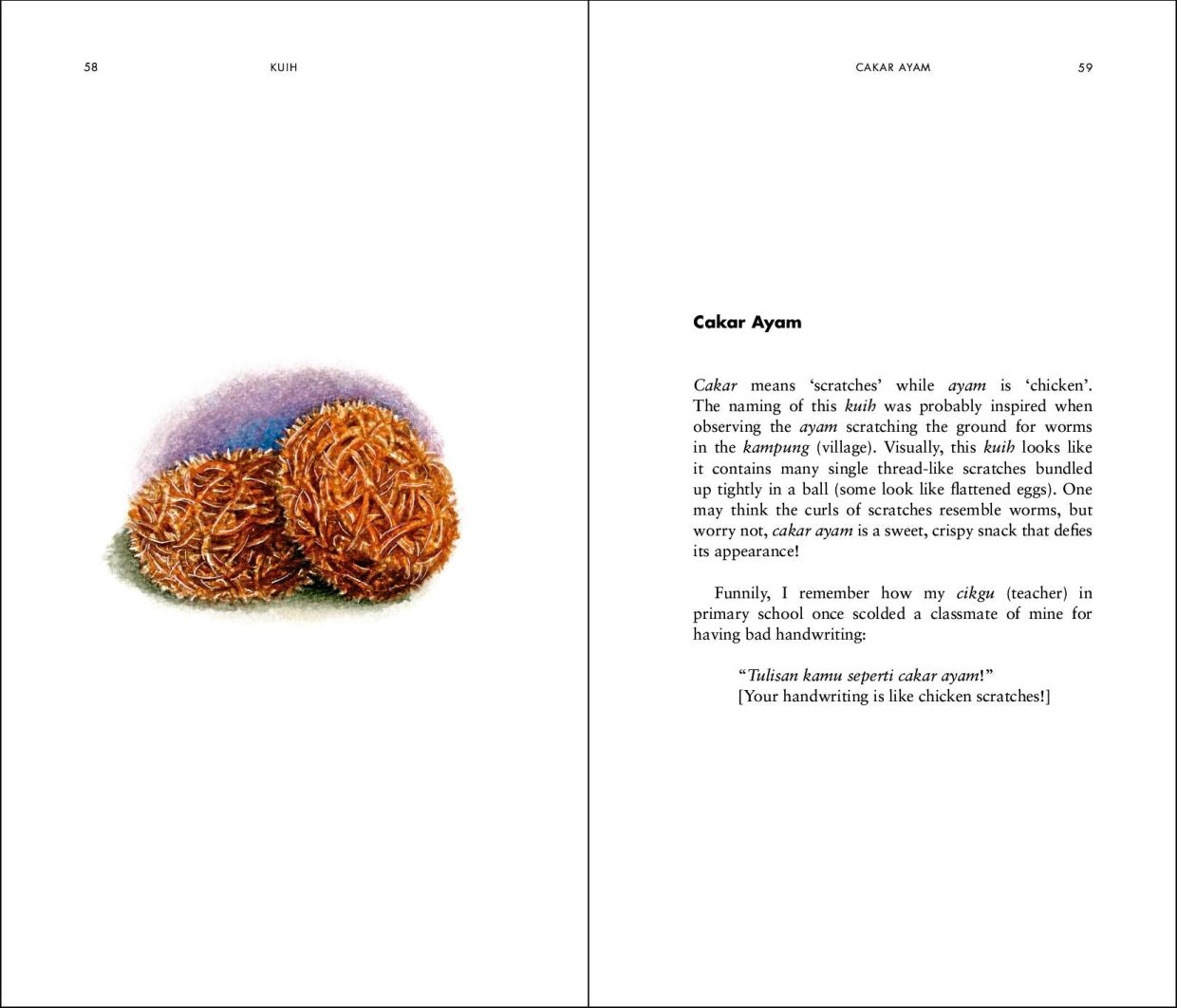 The entry on cakar ayam, a kuih probably inspired when observing a chicken scratching the ground for worms in a village. Photo: Helang Books

Kuih: From Apam To Wajik is also unique in that it does not contain any photographs of kuih, only illustrations. It does have some old photographs and an informative section on the Malay diaspora (from South-East Asia to South Africa and beyond).

Hidayah says this book was a labour of love for her. She failed three times in getting a grant for this book, only succeeding in the fourth attempt. The concept of the book also took a long time as she wanted a different approach to a food heritage book.

Selecting the kuih for the book also was a challenge. Upon consultation with her cooking mentor Sulimah Mohamed, the author decided to omit various treats that were not Malay in origin, but were often made and eaten by Malays. These included pau, popiah and karipap.

“The list of 120 kuih muih in this guide is certainly not an exhaustive one, as there may well be other kuih stories yet to be told.

“Based on my knowledge and consultative research, I used my best efforts to try and capture the stories of authentic Malay kuih, so as to share them with other kuih lovers, ” says Hidayah.

The author said she hopes her book will be a useful guide when conversations crop up on the types of kuih and heritage food.

“Of late, there have been many cases of culinary appropriation. A lot of our Malay kuih have been appropriated as Peranakan kuih. Hence, this book hopes to clear doubts and answer questions pertaining to the authenticity of Malay kuih, ” says Hidayah.

“We hope that this guide will not only whet your appetite for delicious Malay kuih but also will serve as ‘food for thought’, sparking your interest to delve into an exciting world of discovery of the intricacies of Malay heritage food, ” she concludes.

Author promises No Filter look at the Instagram story 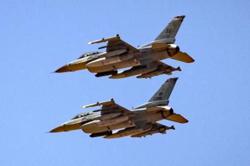