China promotes its 'heroic' battle against virus in new exhibition

People visit the art exhibition 'Unity Is Strength' art exhibition, which includes 'Eternity And Brevity' (right) by artist Pang Maokun, on the fight against the coronavirus at the National Museum of China in Beijing. Photo: AFP

Chinese workers raise their fists beside a red communist flag in a painting displayed at a Beijing museum, one of nearly 200 works put together for a propaganda exhibition that hails, not the Maoist past, but the "heroic deeds" of frontline medics fighting the coronavirus.

Since the discovery of the deadly contagion in Wuhan at the end of last year, the Chinese Communist Party (CCP) has sought to model itself as the vanguard in the fight against Covid-19.

Outside China, Beijing has been the target of Western criticism over accusations that it covered up the initial outbreak, silencing early whistleblowers - including doctor Li Wenliang, who alerted colleagues to the virus in late December but was reprimanded by local authorities.

But inside the country, the CCP propaganda machine has relentlessly pushed a positive narrative.

China officially recorded around 85,000 cases and just over 4,600 deaths - a fraction of the world's total - and has now largely brought its domestic virus spread under control. 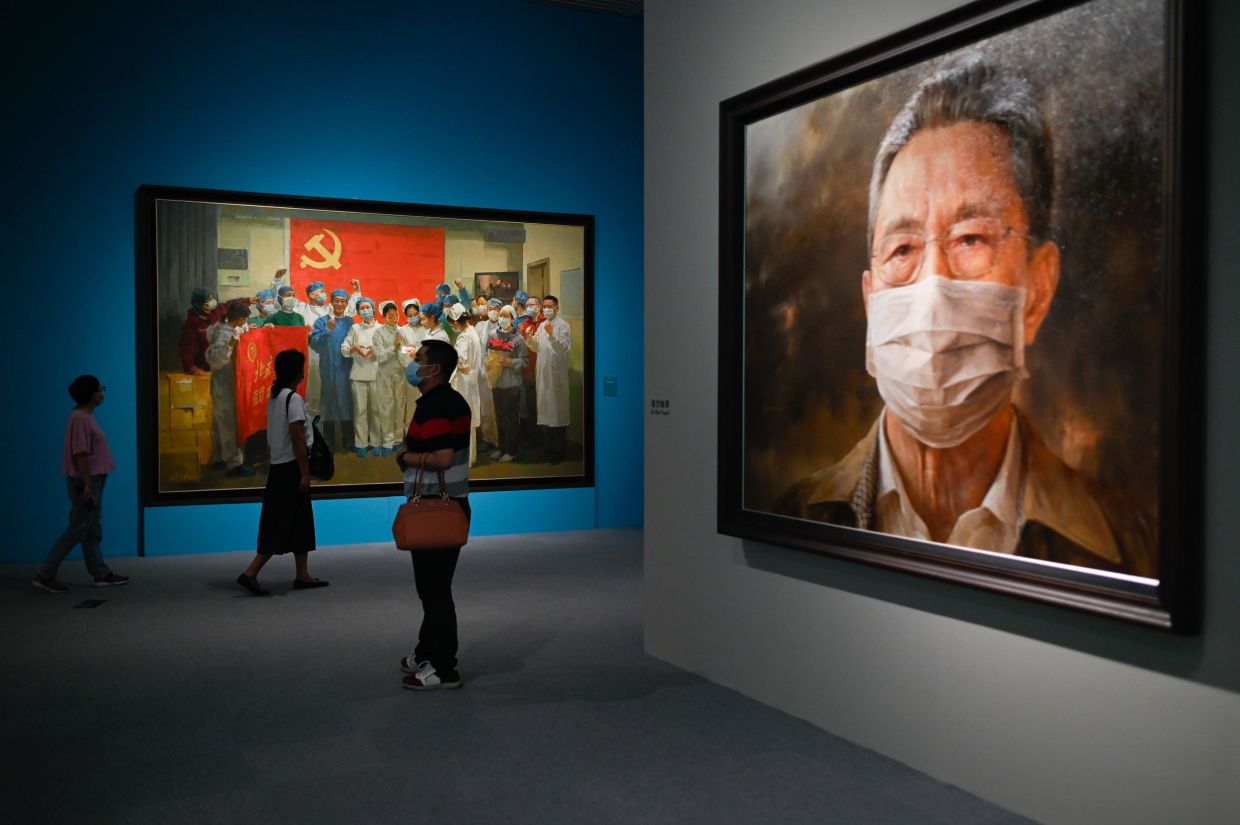 The exhibition in Beijing only allows visitors with Chinese identity cards, and so is not accessible to foreigners. Photo: AFP

The National Museum of China's Unity Of Strength showcases paintings, sculptures and calligraphy, all faithful to the socialist realism style, that depict what the regime says is its success in responding to the crisis.

Tens of millions of people were forced into a crippling lockdown when Wuhan and its surrounding province were shut down in late January.

As the virus gripped the nation, the power of the usually omnipotent and omnipresent President Xi Jinping seemed to waver, with the leader even disappearing from the state-run media for a couple of weeks.

But the exhibition at the museum overlooking Tiananmen Square doesn't show the overwhelmed hospitals in Wuhan, or the homages given to Doctor Li - whose death from the virus in February triggered an usual outpouring of rage against the government on social networks.

Among the large canvases on display, a painting shows an ecstatic nurse reading a letter from President Xi to her colleagues.

In the middle of the room, life-size sculptures of soldiers disembark from a plane to come to the aid of stricken inhabitants, with their uniforms evoking a scene from the Long March - a military episode by the Red Army in the 1930s during China's civil war.

One emotive piece depicts a nurse with a face mask adjusting the full protective suit of a colleague, while another features a close-up portrait of the country's most famous medical expert, Zhong Nanshan, with a tear streaming over his mask.

The state-run China Daily said,"despite not working on the frontline to battle coronavirus, artists spare no effort to document the heroic deeds of those that did, hailing their great contribution to the cause".

The exhibition, which opened on Aug 1 for two months, only allows visitors with Chinese identity cards, and so is not accessible to foreigners. - AFP 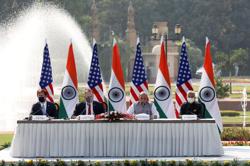 Pompeo: US, India must focus on all kind of external threats 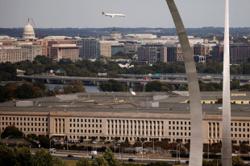 China Daily: Taiwan card a risky play for US