Head down to RexKL this weekend for a walk down memory lane with music from nearly 100 years ago. Caleb Goh will be playing a selection of British and American swing and jazz records on two machines: a HMV 31A gramophone built in 1927 in India, and a HMV 101 from 1926 built in the Britain.

Malaysia's "gramophone deejay" is back on the decks, winding up his music machines and taking the whole vinyl revival experience back even further.

“Most people find it hard to believe when I tell them my gramophones do not run on any electricity at all. All gramophones are non-electric: the motor is run by clockwork and the sound is reproduced by natural acoustics, like a violin or guitar. We are so accustomed to music produced by electric speakers today - such as the piezoelectric speaker in your phones or the solid state speakers on your home surround system - that music reproduced acoustically without any electricity sounds strange to us, ” says Goh, 27, who is a lawyer by day.

He knows this all too well, having tinkered with gramophones for the last decade or so.

It all started when he bought some shellac gramophone records at a flea market in his hometown of Muar, Johor, and realised that it could not be played on his family’s record player.

He was 17 years old then and could not afford to purchase a gramophone that was in working condition.

“I was then given a replica gramophone from India by a kind aunt after I did well in my SPM, but being a replica I could not make it sound good no matter how much I rebuilt it. So I bought a cheap broken antique one for RM200 and restored it myself, ” he says. 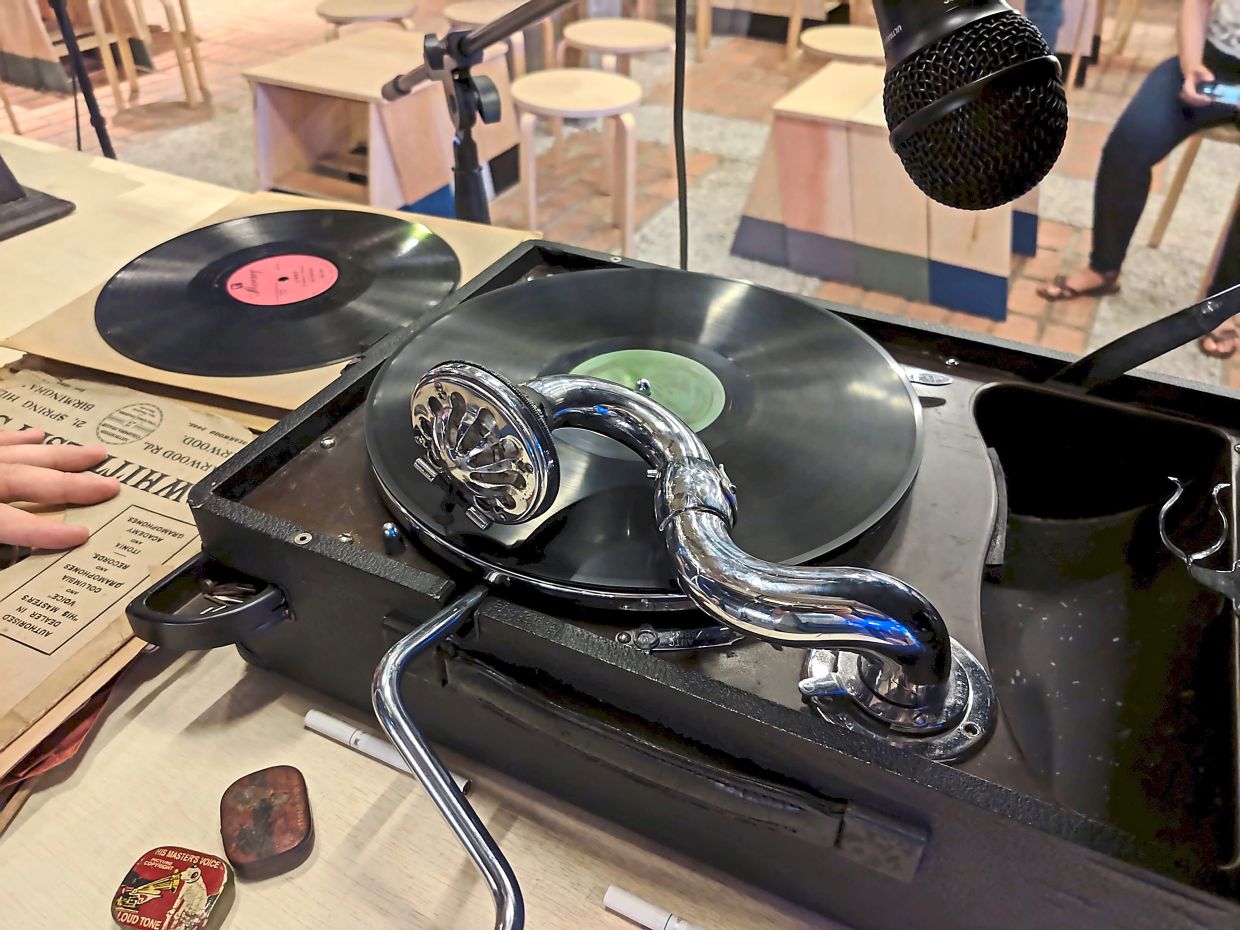 'Most people find it hard to believe when I tell them my gramophones do not run on any electricity at all. All gramophones are non-electric: the motor is run by clockwork and the sound is reproduced by natural acoustics, like a violin or guitar,' says Goh. Photo: Caleb Goh

Goh sources for gramophones at flea markets and has currently three HMV gramophones in working condition. He also has some others in bits and pieces, either to repair in the future or to cannibalise parts from.

“Buying a working condition machine from an antique store in Malaysia is extremely expensive, so I prefer to buy broken ones and then restore them. To restore a gramophone, the clockwork motor is the easiest part as it functions like the clockwork motor of a clock or wind-up toy. The harder part is obtaining the soundbox which produces the sound/music. I usually 'MacGyver' the repairs myself using everyday items such as dawai pagar, motorcycle oil tubing and sewing machine parts, ” he shares.

Goh has a “very small” collection of over 500 shellac records, comprising mostly swing music from the 1920s. He notes that unlike vinyl, shellac records only hold two songs each (one song per side) so you need a sizeable collection to not end up having to listen to the same songs again and again.

The oldest one in his possession is an American recording from 1898, but the one he considers the rarest and most interesting is a Gaisberg recording of a Japanese song from 1903.

Of his 500-plus records, fewer than 100 are of Malay and Chinese songs, which are more expensive and rarer than Western gramophone records. They include songs by Che' Rubiah, Jasni, P. Ramlee and Salmah Ismail (better known as Saloma) recorded on "piring batu."

When talking about his collection, it is obvious that Goh has a soft spot for songs by dondang sayang and bangsawan singers from the 1910s and 1920s. Goh plans to create, or to help to create, an online database where very early (1900 to 1945) Malayan music can be properly restored, digitised, archived, studied and stored. Photo: Caleb Goh

“They are usually uncredited or given pseudonyms like Cik Sally or Miss Bedah, and their real names are lost to history. These songs are not available on the Internet or in any other format, so it is important that I document and archive them before they are lost forever, ” he says.

Goh plans to create, or to help to create, an online database where very early (1900 to 1945) Malayan music can be properly restored, digitised, archived, studied and stored. This is needed, he says, because unlike in the West, Malaysia does not have a freely accessible archive of early sound recordings.

“In the UK, you have the EMI Archives and in the US, there is the New York ARChive of Contemporary Music. Malaysians are enthusiastic collectors of vinyl recordings but are not very interested in the really old stuff from the 1900s to 1920s because of the lo-fi scratchy sound and the unfamiliar music modes and singing styles of early Malayan music. It can sound very alien to modern ears, ” he says.

The music enthusiast has been in contact with several parties to find out how to work together on such a project. It is early days and nothing has taken shape yet, but stay tuned.

Goh will be playing at the "Wind-Up Gramophone DJ" event series at REXKL in Jalan Sultan in Kuala Lumpur on July 25 and 26. Both shows start 4pm. Free admission. More info here.