Who is Apai Saloi? Have you heard about a bird named “Kangkaput”? Do you know why instead of a handshake or a hug goodbye, you get black stains (soot) on your face after a ceremonial gathering in a Kenyah or Kayan longhouse?

Throughout this movement control order (MCO) period, the Tuesday Tales, a new online storyteller project by Sarawak-based The Tuyang Initiative, has been offering a series of wonderful folk tales, short stories and bedtime lullabies from various indigenous communities in Sarawak, especially the Kenyah, Iban and Penan tribes.

As the MCO weeks passed by, this compilation of Sarawakian folk tales, traditions and storyteller reflections, as shared by The Tuyang Initiative members and friends, have steadily grown.

“We know that people are fatigued by pandemic news or articles telling us how to be super and productive during a pandemic. So, we thought to ourselves – why don’t we take the time to share some relatively short stories from our communities, some that we had heard or lived through ourselves, ” says Juvita Tatan Wan, 35, in an interview.

Juvita, who has Kenyah heritage, is the co-founder of the Miri-based The Tuyang Initiative, a social enterprise and arts management outfit formed in 2016.

She says the inspiration came to her while she was keeping herself busy at the start of the MCO by reading various folk tales of Malaysia’s indigenous communities and reflecting on stories told by her father and her elders.

“People would get a simple window into a different culture and a different world altogether – a short getaway. The Tuesday Tales series is as simple as that.

“And the response has been great so far! People have said that they are using them as bedtime stories for their kids and themselves!” reveals Juvita, who hopes that one day Tuesday Tales can be published as a proper book. A year of lost plans Juvita, who is trained in media innovation, and her father John Wan Usang formed The Tuyang Initiative (“tuyang” means friend) to preserve the Dayak cultural heritage and provide sustainable economic opportunities for the local communities. A screenshot of Matthew Ngau Jau (right) and his grandson Luke playing the sape on the Italian-based global online series 'Piccoli Grandi Concerti' on May 2.

She left her product marketing job with a telco in KL in 2017, and returned to her hometown in Miri to establish a network for The Tuyang Initiative.

In focusing on the Kenyah and Kayan communities, The Tuyang Initiative has collaborated with musicians, storytellers, cultural activists and traditional arts practitioners to come up with workshops, arts festival showcases and outreach programmes.

“We pride ourselves in giving opportunities for audiences unfamiliar to Borneo indigenous people and cultures, to directly interact with our practitioners in order to learn or hear from them directly.

“Through the arts, we hoped to give our practitioners a meaningful livelihood – and encourage the continuity of our culture in a sustainable way. We did that through classes, exhibitions or showcases, live performances and more, ” says Juvita.

Rather worriedly, she reveals that most of The Tuyang Initiative’s plans this year have been ruined. The pandemic outbreak and the MCO have forced the small team in The Tuyang Initiative to hit the pause button, and perhaps, even cancelling all its programmes, including in-person classes and staging shows.

“That means, income generation opportunities through these platforms have ceased to exist. Our practitioners are devastated because we had exciting opportunities lined up for them to come out and share our culture in ways they feel are special and meaningful to them, ” admits Juvita. Instead of counting the mounting opportunity and monetary losses caused by Covid-19, Juvita (left) prefers to look on the bright side with alternative plans.

This was supposed to be a big year for The Tuyang Initiative.

Kelunan (which means “people” in Kenyah/Kayan) was supposed to tour this year (July till September), starting in Kuching, then moving to Japan, Singapore and Thailand.

Both the organisers and participants, a cross-generational cast of Kayan and Kenyah cultural practitioners, including Kenyah Ngorek sape master Mathew Ngau Jau (awarded the title of Malaysia’s Living National Heritage) have been downhearted by the cancellations because of the Covid-19 outbreak.

“Those are massive platforms not just in terms of exposure, but also in potential revenue. So it was hard for us, both financially and emotionally.

“It was the biggest thing for us this year! We’re saddened by the cancellations and postponements, but we obviously understand why it is necessary, ” says Juvita.

The Tuyang Initiative is more than just a cultural performance troupe. It is a community-based social enterprise and that means helping the locals to generate income.

“We’re sitting on the crossroads of a social business and as an arts management company, so that puts us in a seemingly precarious situation. We are working with culture and people who, if we lose them, will be gone forever, ” warns Juvita. 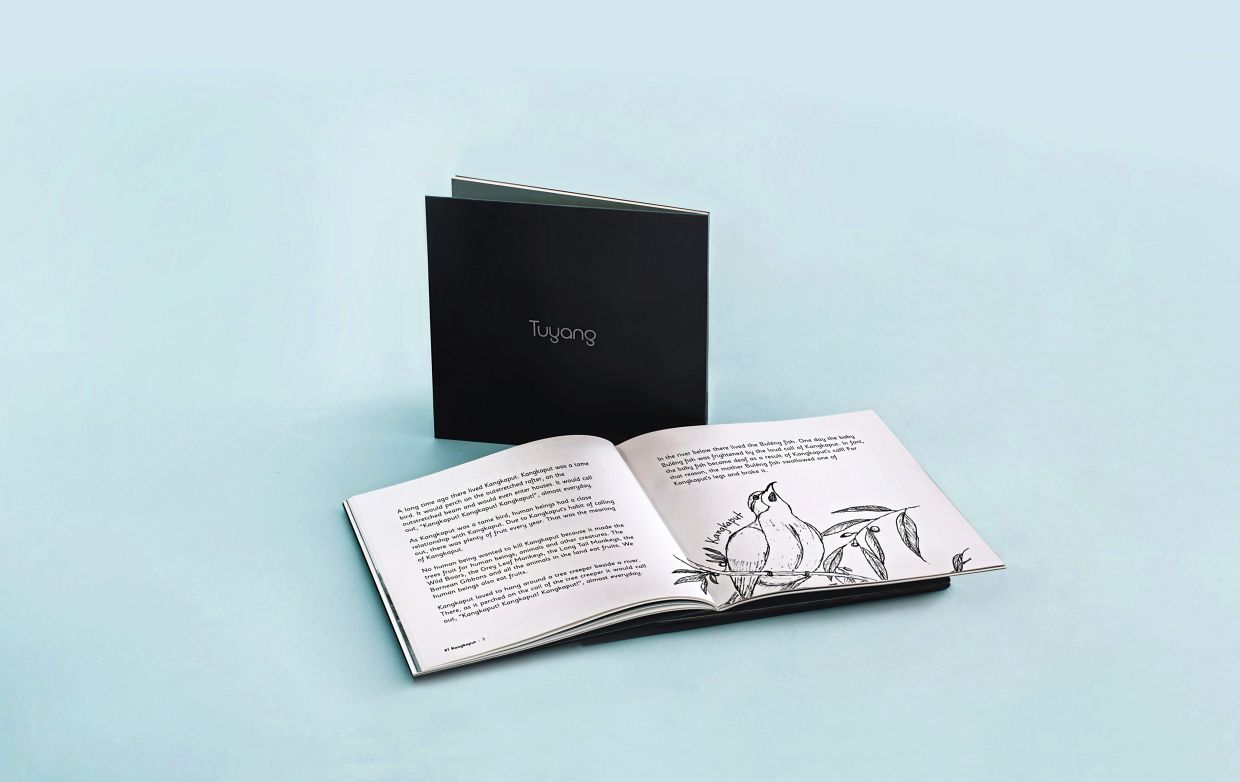 The 'Tuesday Tales' book is an all-ages activity book which combines Bornean indigenous folk tales and pages for colouring.

The pandemic has halted the shows but Juvita knows the business aspect of the outfit cannot be neglected.

“The challenge for our team now is more in forcing ourselves to innovate and move quickly in the face of zero revenue. We are a social business, so it is important for us to ensure we can generate constant revenue, which gets reinvested into working and developing more people, products and services, across the different communities.

“Now, we’re pretty much reimagining what we have on hand – existing products and services, wealth of knowledge of our elders and exercising our own creativity to reach a willing audience, ” elaborates Juvita.

“These circumstances that we are facing together right now do not imply the end to what I’m sure are tremendous feats in what we have done, in whatever we do, or had looked forward to doing, ” says Adrian, 21, a Kayan storyteller/performer.

He is the youngest practitioner of the oral traditions Parap (impromptu songs) and Takna (epics about warrior heroes).

And surely, The Tuyang Initiative has been hard at work. The team has already come up with several ways to generate income from what they have available. A screenshot of the Tuesday Tales series on Facebook.

“The team at Tuyang are working hard to try and ensure that you won’t forget about the likes of me, and the cultural practitioners who are affected by this, both emotionally and financially, ” says Mathew, 67, who is based in Bau, Kuching.

On May 2, Mathew lifted the spirits of Tuyang 'family' when he appeared in a concert series streamed on Italy’s Associazione Culture del Mondo’s Facebook channel.

In a show of teamwork, Mathew also received tech guidance and moral support from Tuyang Initiative community members in Miri, who pieced his home recording together for the Piccoli Grandi Concerti show.

Bau is now a Covid-19 yellow zone and Mathew hopes for better - and safer - days ahead to continue with his sape playing and classes.

"I miss meeting and interacting with people at my homestay or showing people how I make sape in my humble workshop," he says.

The need to go virtual

There is a good chance of witnessing more of Mathew’s sape mastery with a proposed virtual staging of Kelunan, complete with a physical programme book mailed to viewers. Digital tickets will be announced soon with a potential online streaming launch date next month.

For now, only the technical groundwork – cameras, sounds, surtitles and visuals – have begun. The performance will then be pre-recorded in a yet-to-be identified space in Miri for a digital audience, with many of the original Kelunan cast returning, including Mathew and Adrian.

The Kelunan online show will run for a few days, with a global audience being a bonus.

You can also sign up for online classes in handmade Dayak arts and crafts, while also learning dances and music taught by various arts practitioners in the Tuyang community.

Juvita says Tuyang is also finalising plans for the Tuesday Tales activity book – a combination of Borneo indigenous folk tales and colouring book. The book will be available for pre-order soon on Tuyang's official website.

A screenshot of The Tuyang Initiative's upcoming virtual version of its theatre show 'Kelunan', which was supposed to tour in various Asian cities, starting in July. The tour has been cancelled because of the Covid-19 outbreak.

Mathew, who has been coping during this Covid-19 stay home period by making custom kalong art pieces, is receiving support from Tuyang to promote his art.

“I had a limited amount of handmade breadfruit tree bark canvas left at home. Painting on textured material like this is a challenge, but a challenge I truly love because it creates surprises through the texture, and will always be one of a kind, ” says Mathew.

Ultimately, Juvita remains focussed on retrieving something from this blank year. The task ahead isn’t going to be an easygoing Tuesday Tale, but with sheer belief and hard work, there is a chance to keep The Tuyang Initiative ticking through these uncertain times.

“The ‘why’ we decided to start Tuyang doesn’t change, but the ‘how’ needs to be asked again. We will need to potentially figure out a whole new business model for us.

“This is to ensure what we do is sustainable, and not just do something to plug a financial hole in this time, but also to ensure our goals for meaningful livelihood for our practitioners as well as cultural continuity remains intact, ” concludes Juvita.