Art historian Simon Soon doesn’t just take us back in time in his first exhibition in Malaysia, he nudges us to tap into the power of imagination. He also taught himself how to compose a syair just for the occasion.

Using principally “found digital objects”, including songs, images, stories and poems that are available freely in the public domain, The Tyger And The Navigator (Sha’er Datok Keramat Dengan Sang Mualim) stages a historical epic on 18th century cultural encounters in the Malay world.

Here, two figures – the Tyger and the Navigator – are locked in combat but also in embrace.

The show is presented in the form of a memory atlas, where the compilation of historical material in one place allows for new stories to surface and new connections to be forged. Three sets of hand-cranked whirligigs depicting characters in a Muharram procession is also on display, while a broadcast of an 18th century Malay song composed by British East India Company navigator Captain Thomas Forrest plays. 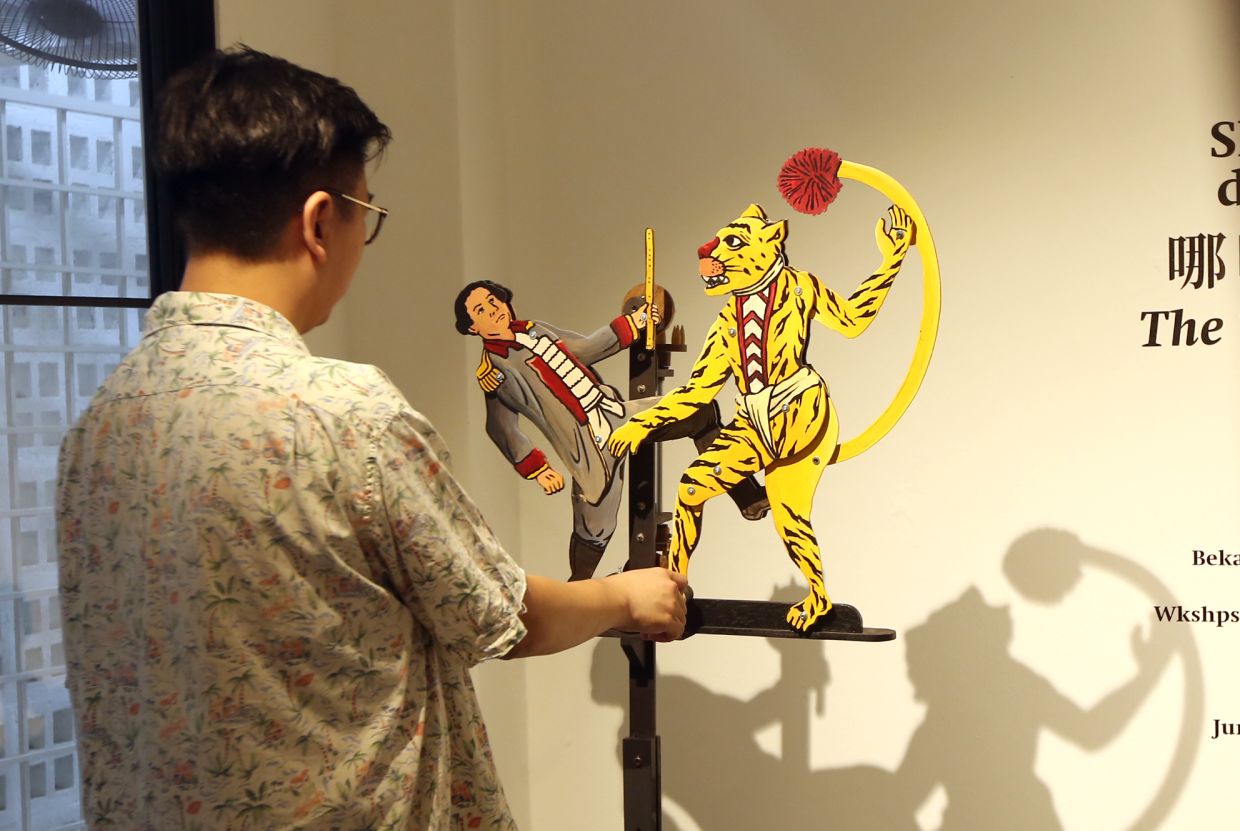 A visitor winds up Captain Thomas Forrest (left) and The Tyger, two hand-cranked whirligigs designed and created by Octo Cornelius and Prihatmoko Moki in collaboration with Soon, on the advice of Rismilliana Wijayanti and Iwan Effendi. Photo: The Star/Izzrafiq Alias

Soon’s presentation of The Tyger And The Navigator “board” is inspired by the “sekolah gambar”.

“For a short time after the second world war, this was the Malay term of ‘the museum’. The sekolah gambar also existed in the forms of reading rooms and classrooms back then, in which the surrounding walls were often pasted with all kinds of infographics and pictures. Today, it is more commonly called a mood board, a concept map or pinterest, ” says Soon.

He points out that German art historian Aby Warburg developed the memory atlas in the 1920s as a means to draw out connections between different images and objects.

“Often the connections are not always immediately apparent. But when they are placed on the same plane and observed closely, sometimes seemingly invisible connections surface amongst what on first impressions appear as disparate things. This also calls for imagination on the part of the historian, ” says Selangor-raised Soon, 37. 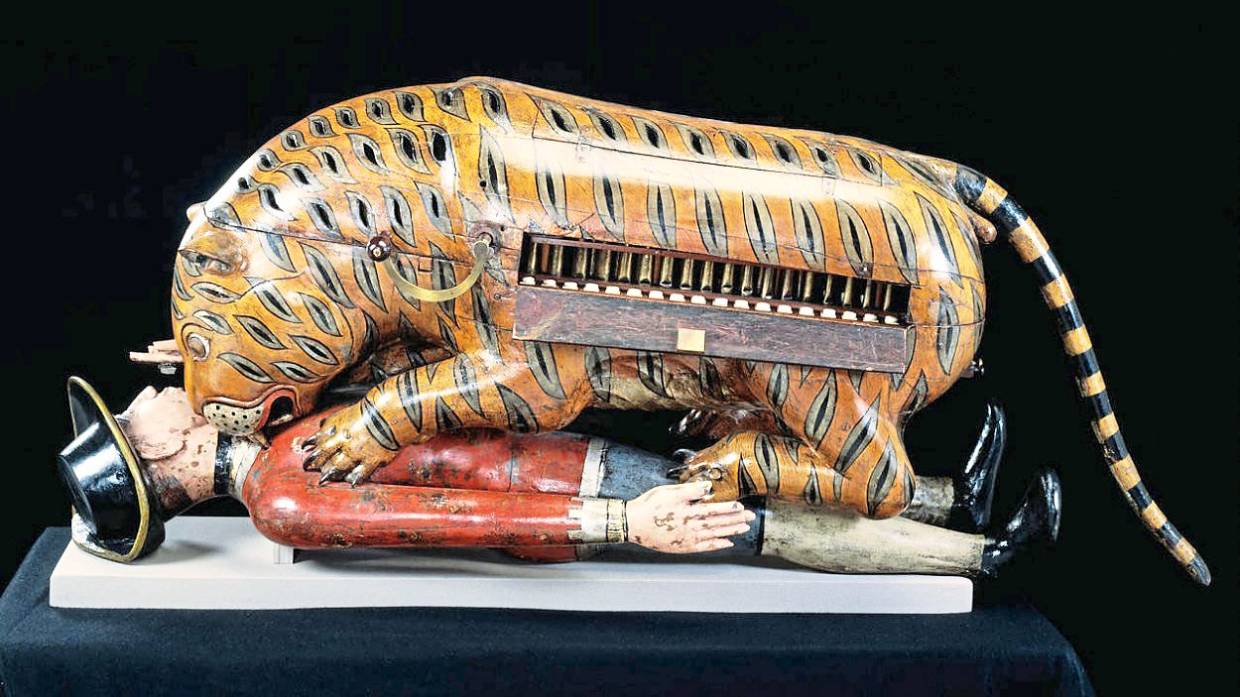 'Tipu’s Tiger' (carved and lacquered wooden semi-automaton, 1793). This is a mechanical toy created for Tipu Sultan, the Muslim ruler of the Kingdom of Mysore in India.

The Tyger And The Navigator ponders on the allegory at the heart of all historical inquiry and he points out that as much as the modern discipline of history postures itself to be methodologically empirical or approximately objective, it cannot deny the fact that at its core, history serves to tell a compelling story about one’s place in the world.

“This project stages this as a theatre, which in 16th century Europe, didn’t only mean a performance. It was also used metaphorically to describe how we organise knowledge, ” he says.

In searching for the “truth”, it is often said that there are two sides to a coin. But in documenting history, Soon sees so much more than that.

“It is not just two sides, ” he muses. “Kurosawa’s Rashomon shows us there are many.”

He is referring to the 1950 Akira Kurosawa film where four characters provide widely differing accounts of the same incident.

So The Tyger And The Navigator is not a list of historical facts, it is also not a simple story about the protagonist versus the antagonist.

“Instead of assuming that arriving at some objective historical truth can solve all our present-day social anxieties, the show invites a poetic investigation into our past of learning how to belong so that we can discover all the subtle wit and nuances that essentially form, what the great Martinique philosopher Edward Glissant, calls a ‘poetics of relation', ” says Soon, who is a senior lecturer (visual art programme) at Universiti Malaya’s Cultural Centre. Female face buraq wears a clock around her neck (watercolour on paper, before 1907). Photo: Teungku Teungoh, Museum Volkenkunde in Leiden, the Netherlands

His area of research spans the 19th and 20th century modern and contemporary art and architecture in the Malay archipelago.

“Identity and race politics, as much as they provided significant avenues to reclaim centuries-long injury to one’s dignity, especially amongst the disenfranchised, also gave rise to a peculiarly entrenched sensibility of the self. This sensibility is rooted in the assumption that we all possess an essence, a true self. Race, religion, ethnic, gender are assumed to be stable and natural markers of one’s identity. In the process, we forget that the self can only be found through interaction with the other, or perhaps more radically, we actually contain multitudes, ” he says.

The Tyger And The Navigator was commissioned for group exhibition An Opera For Animals at Para Site in Hong Kong last year. It then travelled to Rockbund Art Museum in Shanghai.

For this KL iteration, there is an additional element: the syair.

“Contrary to popular opinion, the syair is not so much a ‘classical’ literary genre. I would argue instead it is one of the most radical modernist art form. It emerges as a literary form sometime in the 17th century with a rhyming scheme that suggests the interconnected nature of all things and phenomena. The Tyger and the Navigator plays with such possibility, re-centering imagination in a process of adaptive reuse of historical materials. It allows me to create an atlas of memory and tell a story about the durabilities of our past in our present-day lives, ” he says.

It is hardly a coincidence that a syair is part of this presentation. Two years ago, Soon was at a Wicked Music People “early music” performance in Penang where he heard British East India Company navigator Thomas Forrest’s A Malay Song. 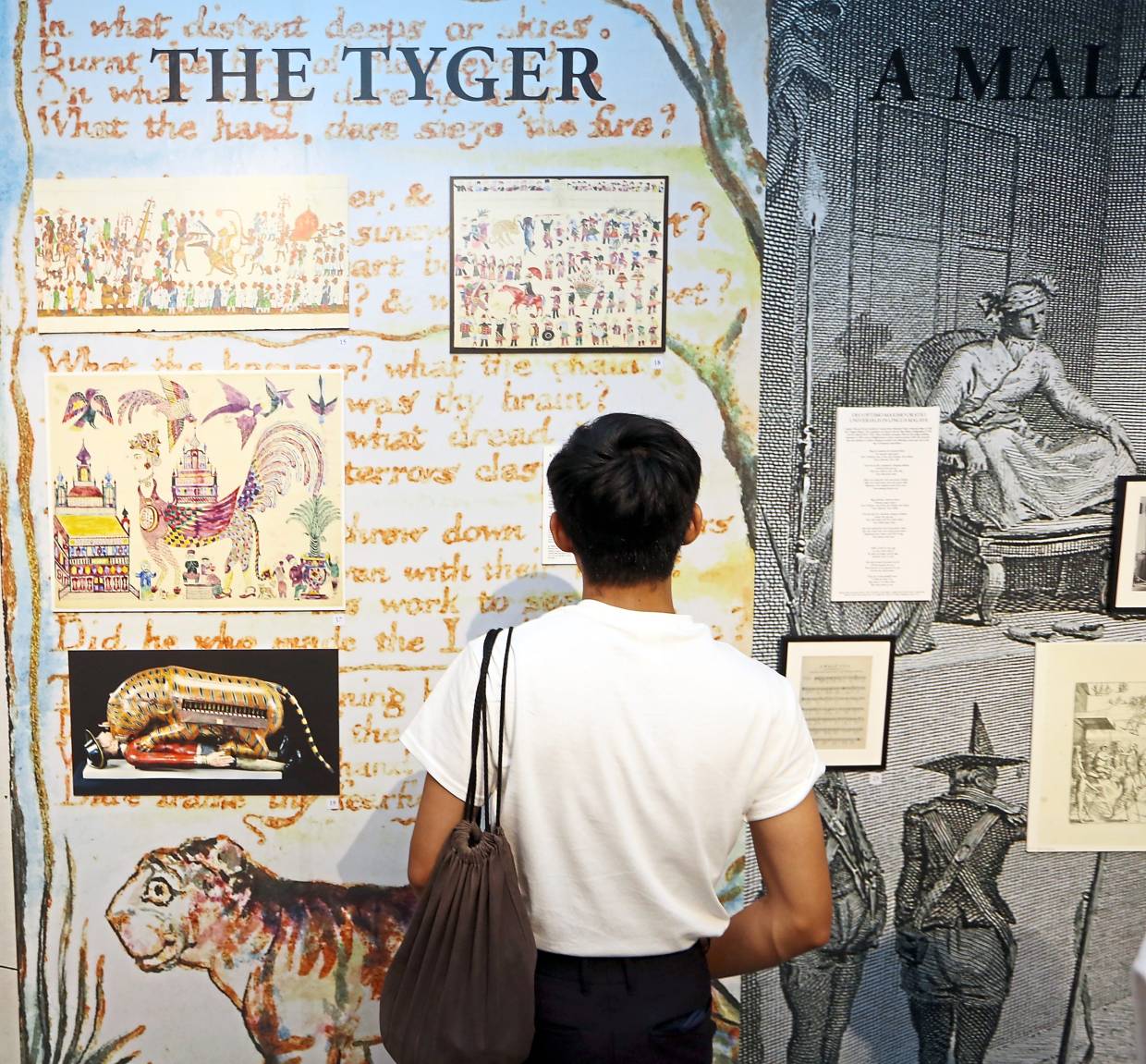 This work is one of Forrest’s Malay poems which he performed before Sultan Ala’uddin Muhammad Shah of Aceh, Sumatra, in 1784. He set it to his own arrangement of a melody by Italian composer Arcangelo Corelli (1653-1713). During his travels around the Malay archipelago in search of favourable trading terms, he composed Malay songs, played the flute, taught European staff notation and gave violins as gifts.

“He used music and poetry as a medium to translate goodwill and gain favourable trade relations amongst the Sultanate port cities of the Malay world. What fascinates me is that through these interactions and moments of cross-boundary learning, both sides are transformed through the encounter. Thomas Forrest would compose a ‘Malay song’ set to European score and the Sultan of Aceh became, by all accounts, a rather accomplished violinist, ” says Soon.

The syair Soon composed for The Tyger And The Navigator is featured in a booklet that draws on the aesthetics of early 20th century Malay printed books. Designed by graphic designer and illustrator Jun Kit, the booklet will be on sale for RM10 during the exhibition.

The Tyger And The Navigator is on at The Back Room, Zhongshan Building, 1st floor, 80A, Jalan Rotan in Kuala Lumpur till March 29. Opening hours: 12pm-7pm (Tuesday-Friday), 11am-7pm (Saturday), 11am-6pm (Sunday). More info: www.thebackroomkl.com.

The Tyger And The Navigator exhibition A visitor winds up Captain Thomas Forrest (left) and The Tyger, two hand-cranked whirligigs designed and created by Octo Cornelius and Prihatmoko Moki in collaboration with Soon, on the advice of Rismilliana Wijayanti and Iwan Effendi. Photo: The Star/Izzrafiq Alias

'Tipu’s Tiger' (carved and lacquered wooden semi-automaton, 1793). This is a mechanical toy created for Tipu Sultan, the Muslim ruler of the Kingdom of Mysore in India.

Female face buraq wears a clock around her neck (watercolour on paper, before 1907). Photo: Teungku Teungoh, Museum Volkenkunde in Leiden, the Netherlands

The design of the board for a board game called 'Atchin - Nieuw vermakelijk verovering-spel' (A New Entertaining Conquest Game), 1874, at the Rijksmuseum in Amsterdam. Atchin was one of the names the Aceh Sultanate used to be referred to.

The King of Atcheen giving audience to Captain Forrest in 1764, by Charles Benazech and engraved by James Caldwell. Published Feb 15,1792, by Captain Thomas Forrest.

"The Gifted" art exhibition showcases talents of artists with disabilities

Major art exhibition highlights in KL over the coming year