The love between Scarlet Witch and The Vision is one of Marvel universe’s most tragic romances, one that is about to hit TV screens this year.

Of all the Marvel Cinematic Universe announcements made during the San Diego Comic Convention last July, the one that I was most apprehensive about was the WandaVision TV series, which will focus on Scarlet Witch and The Vision.

Why? Because I’ve followed this unbelievable mutant-synthezoid union since they first went public with their relationship (Avengers (vol.1) #108). I was elated when they tied the knot (Giant Size Avengers #4), over the moon when they became parents (Vision and Scarlet Witch (vol. 2) #12), and was crushed when Wanda’s kids were revealed to be a figment of her imagination (West Coast Avengers #51). This eventually drove her life and sanity on a downward spiral.

I can’t think of a more tragic ending to a fictional relationship.

Then again, the Marvel Cinematic Universe (MCU) has never been completely faithful to its source material – the comic books – so a big part of me hopes that love can rewrite history for this former power couple. Not much has been revealed about WandaVision’s story yet, though it has been confirmed that it will lead directly to events in the upcoming Doctor Strange In The Multiverse Of Madness.

Anyway, to celebrate the unlikely couple’s imminent reunion (the Disney+ show's release was recently pushed forward from 2021 to this year), here is a recap of what I think is the saddest romance in the Marvel Universe.

They first met in the pages of Avengers (vol.1) #76, where Wanda was held captive by Arkon The Magnificent (a B-grade Conan) and the Vision was part of the Avengers rescue team. There were no sparks between them at the time, and it took a cataclysmic event – the Kree-Skrull War (Avengers #91) – for Wanda to finally show her affections for the Vision.

Though he coldly rejected her at the time, they finally became an item in Avengers #108, despite strong protests by Quicksilver and Hawkeye (who had a crush on her back then). Sparks only started flying between the two Avengers in 'Avengers' #91, though Vision coldly rejected Wanda at the time.

Wanda and Vision’s relationship received varying responses, some even to the extent of shock and disgust. However, such brickbats only strengthened the couple’s desire to be together and they even overcome a “distraction” in the form of Mantis – who did cross some of the Vision’s circuits!

Alternatively, Wanda had her own fair share of suitors, notably Wonder Man, who provided the “brain template” for the Vision.

From Hell to wedding bells

During Wanda’s quest to amplify her hex powers, she inadvertently ended up being a captive in Dormammu’s domain. The Vision not only rescued her, he even proposed to her and they exchanged vows within the span of one issue (Giant Size Avengers #4). Their union certainly proved that love conquers all, but alas, happy endings just don’t sell comics. Vision proposed to Wanda and they got married within a single issue (Giant Size Avengers #4).

Seven years (in real time) after their wedding, the couple were gifted with their first ever limited series in 1982.

The four-part The Vision And The Scarlet Witch series concentrated on Wanda and Pietro’s (Quicksilver) past, with Magneto being revealed as their actual father (this was subsequently undone in the 2014 AXIS event).

Their ties with Magneto lasted almost three decades and was instrumental in the Master of Magnetism’s transition from evil to good mutant.

Buoyed by the interest in the first limited series, a second outing came in 1985. This time, the 12-issue limited series took the couple’s relationship to a new level – parenthood! Had this Steve Englehart brainchild been left untouched, Wanda and Vision would have “retired” as happy parents to twin boys – Thomas and William. Scarlet Witch and Vision starred together in two limited series.

While John Byrne is synonymous with multiple “rebirths” (Fantastic Four, X-Men, Hulk, Superman, etc), he had the opposite effect on Scarlet Witch, as his West Coast Avengers stint (#42-50) shattered the Wanda-Vision relationship, as well as their kids!

With his 1989 storyline Vision Quest, Byrne started off by permanently “rebooting” the Vision, which impacted his feelings for Wanda. Byrne then delivered the coup de grace by exposing that their kids were merely a combination of Wanda’s hex-laced imagination and fragments of Mephisto.

The stress and shock of losing her husband and kids within that short span of time drove Wanda to the looney bin. Though she did “recover” via subsequent stints with the West Coast Avengers and Force Works, her fragile psyche left her mentally vulnerable. 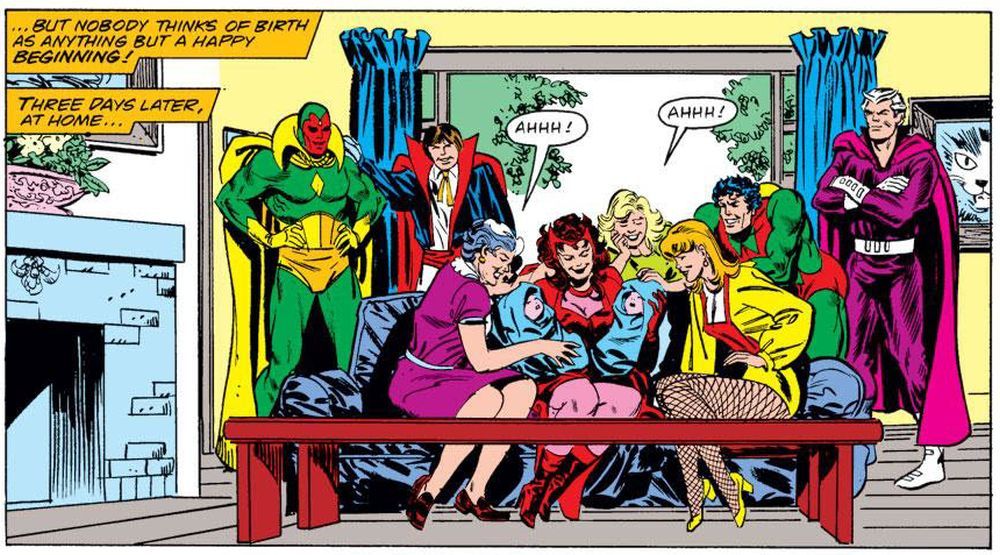 This picture of a happy family sadly did not last long for Scarlet Witch and Vision.

The terror of Wanda

While Wanda and Vision did try to reconcile a few times, nothing concrete came out of it. With her love life heading nowhere, the only thing that kept developing were her powers.

The trauma of losing her kids left a permanent scar in her psyche and the memory of it finally caused her to snap, with the Avengers facing the full brunt of it during the Avengers Disassembled event (Avengers #500-503). Eventually, it left the Avengers with no choice but to shut down her mind and keep her in a vegetative state.

Inevitably, this led to an even worse outcome, as Wanda re-emerged deadlier and more dangerous than ever, with her utterance of three dreaded words – “No more mutants” – causing the alternate House of M reality (2005), the repercussions of which are still felt today. 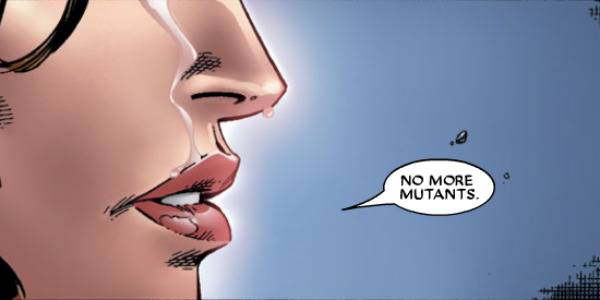 With these three words, Wanda rewrote the history of Mutants forever. 'WandaVision' appears to draw heavily from Tom King's seminal 'Vision' series.While most of the attention has been on Wanda and her reaction to the tragic break up, life has not been rosy for Vision either. His psyche and humanity were explored and dissected through Tom King’s Eisner Award-winning 2016 limited series Vision, a 12-part story that offered a touching insight into the synthezoid’s life.

In the series, he “moves on” from Wanda by literally creating his own family – a wife named Virginia (based on Wanda’s brain patterns) and two kids – Vin and Viv.

The series took a deep dive into Vision’s character, as he tries to discover his own humanity, but ends up making things worse instead.

Judging from early images from WandaVision featuring Wanda and Vision enjoying each other’s company in a suburban home, the series could yet draw some inspiration from King’s series, which wouldn’t be a bad idea.

With all these separate developments causing endless trauma in both characters’ lives, you can’t help but wish for some Hex-magic to permanently nudged these star-crossed lovers back together. Here’s hoping that WandaVision will be able to do that. 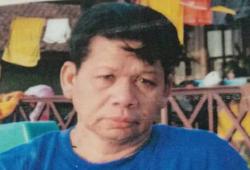