Most of us are where we are today because of one good teacher, who made a difference in our lives.

For writer and director Khairi Anwar, that teacher was one Cikgu Fadilah, who taught him Science in primary school.

“She sat down with me, asked me what school I wanted to go, and gave me recommendations. And then she wrote letters there for me. So after primary school, I had the chance to go to boarding school. She was the only teacher who did that for me,” recalls Khairi, 26, fondly.

Cikgu Fadilah serves as the inspiration for teacher Mary, one of the characters in IQ Rock, a play that tackles family, struggle and inequity in the Malaysian education system.

This original play, written and directed by Khairi, was first performed at the Damansara Performing Arts Centre (DPac) in Petaling Jaya in April this year. The production received rave reviews and a standing ovation, and even earned Khairi an invitation to this year’s Singapore Theatre Festival.

The play, presented by Anomalist Production, will be restaged at DPac from Aug 17-19, with almost all the original cast members reprising their roles. It is a collaboration with Teach For Malaysia, which aims to raise awareness about educational inequity in Malaysia, particularly in rural areas. 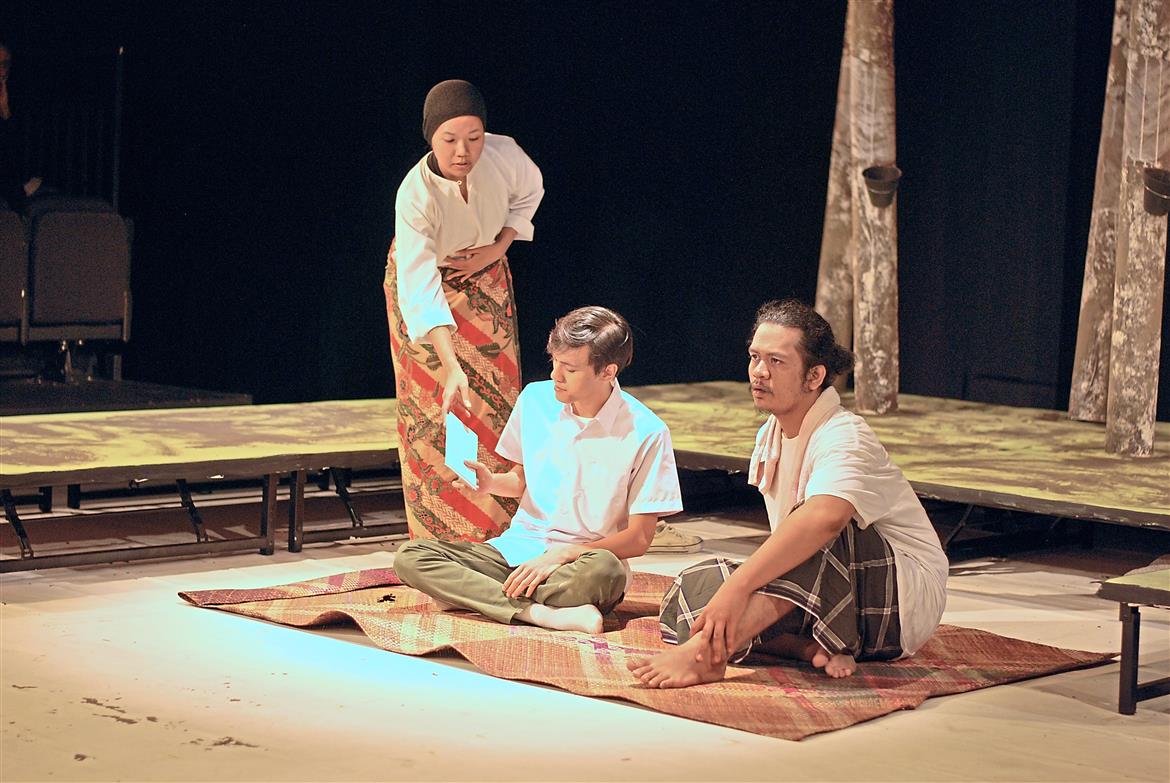 The young and restless Azim (middle, Haikal) has a moment with his mother (Tharwa) and father (Maza) in his house.

IQ Rock is a bilingual (Malay-English with subtitles) play set in a Felda settlement in Serting, Negri Sembilan. It tells the story of Azim, a young, hardworking boy, who lives with his illiterate parents. Azim spends his days helping his father tap rubber and in his free time, he hangs out with his friends, who are mainly aimless delinquents. Azim is also an SPM student at SMK Seri Serting.

Azim longs to step out of the Felda settlement and experience the world, but is bound by financial issues.

What Azim and the rest of SMK Seri Serting didn’t know was that their lives were about to change. An old lady named Mary, a teacher known for teaching in only the elite schools her entire teaching career in the city would come waltzing into the grounds of SMK Seri Serting. Now, in her 50s, “Teacher Mary” decides it is time to make a difference knowing that English is one of the most failed subjects in these areas.

IQ Rock is definitely not like the acclaimed movie Bilut (2006), a movie about the epic struggles of early Felda settlers, but it definitely is one of the few instances where the mainstream crowd can discover more about the hopes and dreams of young people living in a Felda settlement in a theatre setting. Perhaps, you might see similarities with the film Adiwiraku (2017).

Tan Cher Kian, 39, a co-producer of the IQ Rock restaging, watched the IQ Rock first production, and recalled getting emotional at some of the issues put forward in the theatre show.

“I felt very angry, and sad at the same time. I saw a lot of issues that affected my generation, and many years later, nothing has changed,” says Tan, who is also an actor. 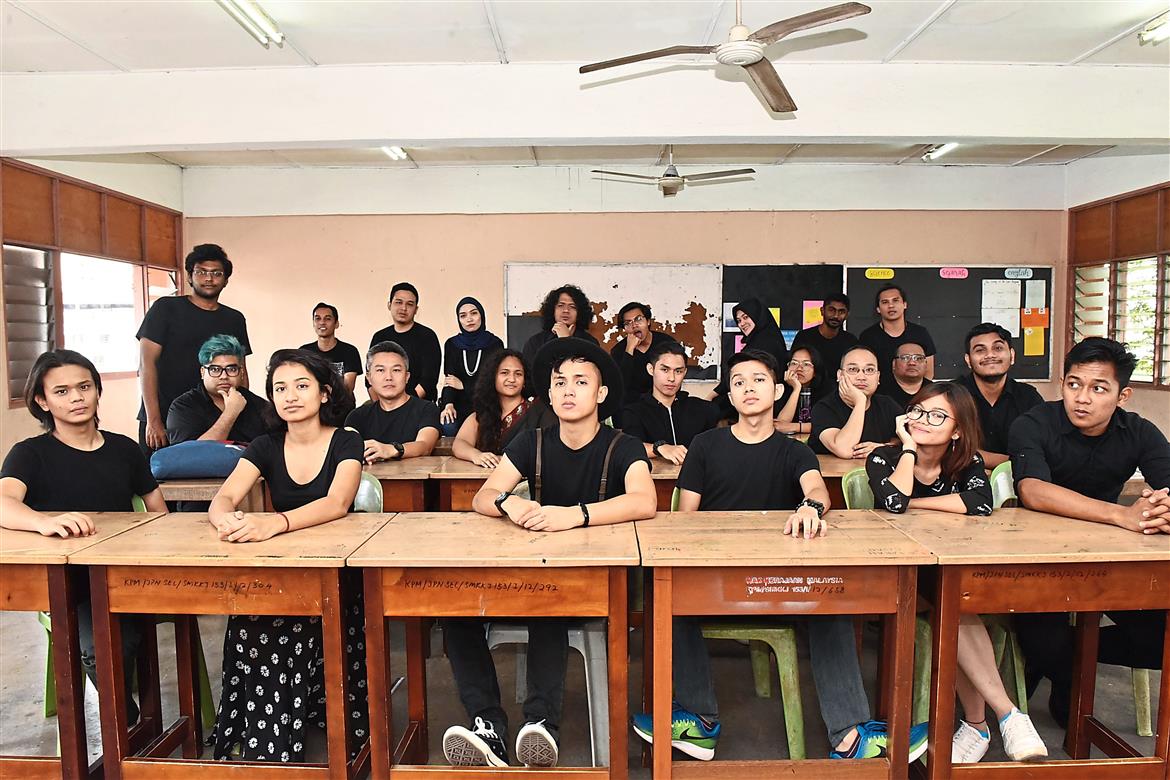 The full cast and crew of the IQ Rock: Restage. Photo: Anomalist Production

“It’s a story that’s very unique to Malaysia. Yes, it’s set in a Felda settlement, and Malay language is naturally used (for this show). But I feel that especially now, with the new government, it’s a good time for this story to be told, to everyone regardless of race or religion,” he adds.

The story has a deep resonance, especially during these hopeful yet challenging times in Malaysia.

“It will strike a chord. If you are a privileged student, you can empathise with students who went through life with a lot less. Hopefully, it will make people aware of what is going on around them, and get them to do something,” says Tan.

Like a typical DIY theatre company, some of them will be helping out in the production, creative design and stage management.

Khairi said Fimie, an established child actor, would add a new dynamic to the play. While the previous actor portrayed Azim as a more reserved individual, Fimi’s portrayal is more vibrant.

According to Khairi, the idea for the play had been with him for a long time. Its title is wordplay on the Arabic word “iqra” (read). The story only really came together, however, after Khairi met Azmi Hud (now the show’s co-producer) during the staging of Anomalist Production’s earlier show Attorney: Law vs Justice. Azmi’s father was a rubber tapper in a Felda settlement, and Khairi was soon captivated by the details of how the settler community grew up there.

Khairi says it took him about three to four months to write the script, which involved a lot of visits to the settlement where Azmi (known to them as Jimi) lived.

“I visited Jimi’s house (in Serting), at least, three or four times. I mingled with his family, friends and neighbours. I also wandered around to see what the (settler) environment was like. Jimi’s Felda settlement was located right next to a rubber estate, so I got to see how Felda families and estate people connect. I spent time studying and just trying to learn about their lives,” says Khairi.

He hopes to take the show on tour, perhaps show it in schools or other Felda settlements.

“We will need funding to get IQ Rock on the road.”

In many ways, Khairi feels this play sheds light on the state of the Malaysian education system (in rural areas, notably), racial and demographic indifference as well as family relationships.

“Until we can reach out from rural to urban areas, our work here isn’t done,” concludes Khairi.

IQ Rock: Restage will be showing at the Black Box, Damansara Performing Arts Centre (DPAC), H-01, Empire Damansara, Jalan PJU 8/8, Damansara Perdana, Petaling Jaya in Selangor from Aug 17-19. Shows are at 8pm, with extra 2.30pm shows on Aug 18 and Aug 19. Tickets are RM55 and RM45 (concession). Parental guidance is required for children below 13 years of age. Tickets can be purchased at www.anomalistproduction.com. FB: Anomalist Production.