The Shadow Hero: The tale of the first ever Asian superhero

QUICK, off the top of your head, how many Asian superheroes can you think of? I got as far as Sunfire, Jubilee, Lady Deathstrike and Shang-Chi, before dredging up Cicakman and realising that compared to heroes of other, er, ethnic groups, there aren’t that many Asian ones after all.

This makes the story of The Green Turtle even more fascinating. You see, the lead character of Gene Luen Yang and Sonny Liew’s The Shadow Hero is actually based on a character that was created in the 1940s that was supposedly the first-ever Asian comic superhero.

The Green Turtle appeared in Blazing Comics (1944) #1-#4, during a period of time that is known as the Golden Age of comics, which saw a comics boom thanks to the creation of Superman in 1938’s Action Comics #1, and the subsequent birth of classic characters like Batman, Captain Marvel (Shazam), Captain America, Namor, Wonder Woman, The Flash, Green Lantern, and so on.

According to Yang’s explanation in the appendix of The Shadow Hero, it was a time when comic books were selling by the millions, and publishers big and small were coming up with countless characters and titles in order to cash in on the craze. The original Green Turtle was a mysterious WWII hero who defended China against the Japanese.

Hing came up with a WWII hero called The Green Turtle, who wore a cape and mask over his face and defended (then US ally) China against the Japanese. Although he did not have any obvious superpowers, Yang notes, he seemed to have a “knack for avoiding bullets”.

Now, this is where things get a little hazy. “Supposedly, Hing wanted his character to be Chinese,” writes Yang. “His publisher didn’t think sure a Chinese superhero would sell and told Hing to make his character white.”

Although Hing did eventually colour the Green Turtle’s skin an “unnatural pink” to distinguish him from Asians, he never drew the hero’s face. In fact, Yang notes that “we almost never get to see his face. Most of the time, the hero has his back to us. And when he does turn around, his face is always obscured by something – a combatant or a shadow or even his own arm.”

Even stranger was this “strange turtle-shaped shadow that looms over the Green Turtle’s enemies”, which is never explained or commented on. “It’s just there,” Yang points out. The Green Turtle’s exploits ended after just a handful of issues, but his legend as the first-ever Asian superhero lives on with The Shadow Hero, Yang and Liew’s reimagining of the hero’s origins.

It’s hard to imagine any other creators working on this character. Yang is the multiple-Eisner-nominated creator of American Born Chinese and Boxers & Saints, while the Malaysian-born Liew is best known for Vertigo Comics’ My Faith In Frankie and Malinky Robot, and for being the co-founder of the Eisner-nominated South-East Asian comic anthology series Liquid City.

Both creators have a flair for concise and clear storytelling as well as clean, almost cartoon-like but yet wonderfully fluid artwork. Their past work, whether it’s on Asian or Western comics, has a very quaint Asian aesthetic feel, which makes The Shadow Hero seem like the perfect fit of writer and artist.

Indeed, Liew himself states that it was quite a natural and easy collaboration process. “Both of us have similar storytelling sensibilities. We have a similar sense of aesthetics, so it was quite easy to work together,” he said during a quick interview at the launch of Liquid City Vol 3 at Kinokuniya Suria KLCC last year.

“The original story had scenes where you could not see his face at all, and I suggested that we try to incorporate that into the story as well, and he had already thought of that!”

While Yang usually does his own illustrations for his books, this time, he passed that responsibility to Liew.

“He always says that he doesn’t have the chops to do it and that’s why he called me, but for me, it’s just a different style. I think he could have done it himself easily too ... So it’s interesting to see how his story and my art go together,” says Liew. 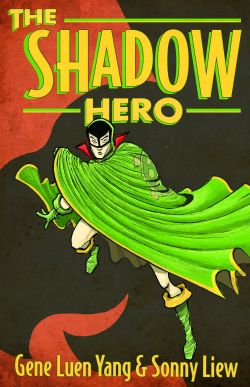 MAKE no mistake, this is a very Asian comic book about a very Asian superhero, written by two very Asian comic creators. The story, dialogue, and the artwork all have a very Asian feel about it, and even the origin of the Green Turtle is an almost self-deprecating parody of how Asian mothers push their dreams on their children.

The Green Turtle here is first-generation Chinese-American Hank Chu, whose mother decides that he should be a superhero after an encounter with a real superhero, the Anchor Of Justice. Unfortunately, he just isn’t very good at it.

But wait! his father also harbours a secret from his past, one that will change Hank’s life forever, and could turn him into the superhero his mother always wanted him to be ...

Hank himself is the son of a modest grocer in Chinatown, and his mother is a typical (almost stereotypical, in fact) tiger mom who pushes her lavish dreams of having a superhero son onto Hank.

The comical way Yang and Liew portray their characters makes this a wonderfully entertaining read. The dialogue is snappy and fun, and Hank’s mom, Hua Chu, is a standout. From her obsession with superheroes to her inability to keep Hank’s secret identity a secret, she is the character with the most amusing and expressive developments. 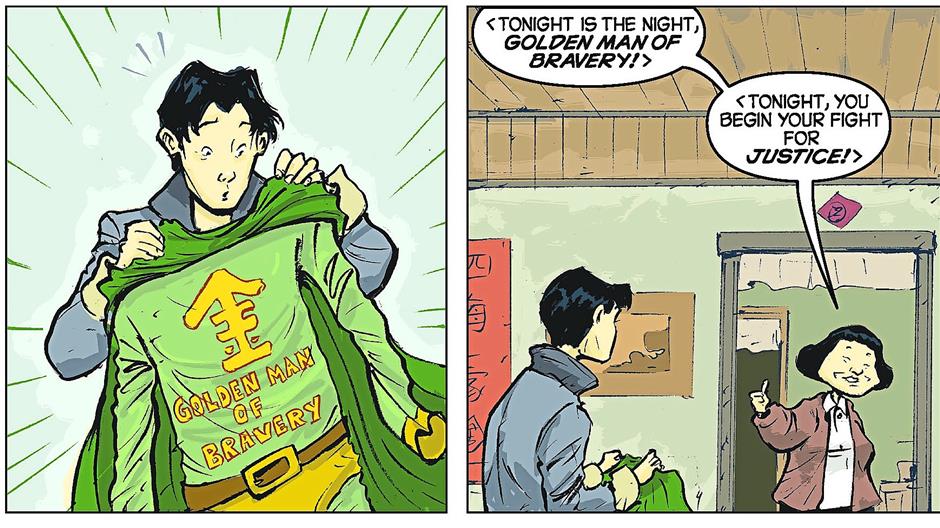 Hank Chu’s mom is the main reason he became a superhero. No, really.

Liew’s artwork here is some of the best I’ve seen from him. It brings out the best in Yang’s story, adding depth, detail and an element of fun and excitement into the panels. His eye for detail also extends to the era’s locations and fashions, while during the more action-packed fight sequences, you can genuinely feel the tension and urgency in the air.

Even after the story is done, the book still manages to surprise you. The aforementioned appendix not only features Yang’s explanation on the history of the character and how they came up with the project; it even features the original issue of Blazing Comics #1 featuring the first appearance of the original Green Turtle!

While the racial slurs and stereotypes can be quite jarring (this comic was published in 1944, after all), it’s somewhat fascinating to see the tricks Hing utilised to fulfill his vision of the character. If only he were alive today to finally see how Yang and Liew have taken his creation turned him into the full-fledged Asian superhero he was originally intended to be. I think he would have been just as proud as Hank Chu’s mom.

The Last Shadow Hero and Barakamon are available at Kinokuniya, Suria KLCC. Call 03-2164 8133 or e-mail: ebd3_kbm@kinokuniya.co.jp or visit www.kinokuniya.com.my.