It’s no longer just about whisky. Whenit’s blended with sparkling design, funkyfashion, DJ-spun grooves, and 18-courselunch, you begin to understand the goodlife.

WHAT more can you do to raise the profile of a name that already passes everyone’s lips at the most happening society events or, at least, wherever fine Scotch whisky is appreciated? (which covers pretty much the entire world). 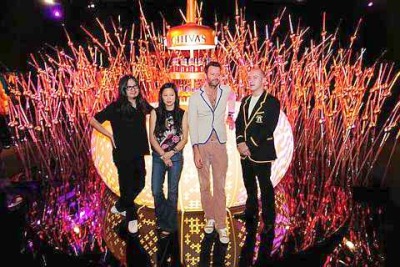 If the name is Chivas, and the place is Hong Kong, no further introduction is needed, no explanation called for. You just throw a party. But it can’t be just any party, it has to be the one that everyone who’s anyone in this party-loving Special Administrative Region would do anything to get on the invite list.

The recent Chivas Studio Hong Kong 2008 was that event.

Billed as “an exuberant blend of design, art, music, gastronomy and mixology through an experiential platform for tastemakers, opinion leaders and whisky lovers to share the Chivas spirit of luxury and exuberant creativity,” it was the event for the A-list crowd to be seen at.

The party came to Asia for the first time in September following the resounding success of similar events in New York and Miami in the United States and Madrid, Spain. 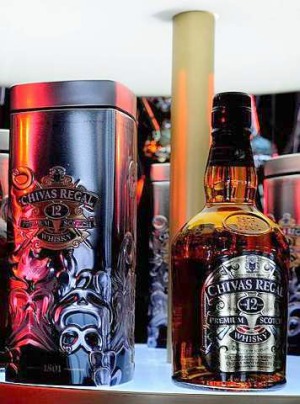 A standard bottle of Chivas Regal 12 Y.O. and an Evan Douglas gifttin.

The Hong Kong do also followed the proven formula of blending art, entertainment and fine dining, enhanced by the presence of hand-picked “whisky ambassadors” – eminent global and regional artistes and celebrities – who either perform or create unique works just for Chivas Studio.

The Scotch ambassadorial corps at the harbour-front Watermark Restaurant was spearheaded by British-born, Hong Kong-based, award-winning designer Michael Young, who poured all his creative energy into conceptualising the spectacular Fireworks Bar that was the centrepiece of the Chivas Studio.

Speaking about the inspiration for his creation, Young said his research led him to discover that each whisky distillery had its own distinctive shape for the copper vats or stills used to distil the whisky.

“So, for this project,” he explained, “I set out to create a bar that incorporates elements of the Chivas whisky still … I used hundreds of gold sticks inspired by the copper stills and created from them an explosion of dazzling fireworks which is often associated with the festivity and energy of Asia.”

For good measure, he also threw in the Chivas 18 Y.O. Shanghai Tang Luxury Barrel Bar Trunk, a combination of the Chivas reputation for fine luxury and the fashion label’s sense of style.

Celebrated fashion photographer Wing Shya adorned the party venue with wall-sized blow-ups of some of his haunting cinematic style works, along with his first solo art photography exhibition in Greater China, titled Prevation: a Manga Story.

DJ and street artist Ge-ology blended music with fashion and art in a slightly bizarre live performance, using aerosol cans to decorate a dress that was still being worn by a model. 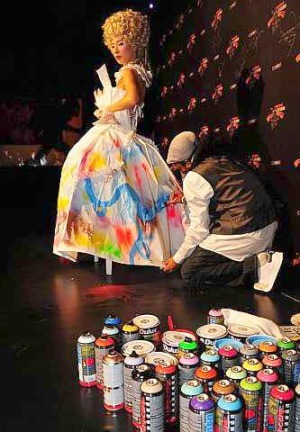 In addition to being a prominent DJ and music producer, Ge-ologydemonstrated his skills as a visual artist with a bunch of aerosolpaint cans and a willing model.

Over the party’s three-day duration, more rocking rhythms and pulsating beats were provided by legendary lyricist and rap guru, Pharoahe Monch. The local talent were not to be outshined, with popular local singer Justin Lo sparking off a wild frenzy among screaming fans when he gave a polished solo performance as well as a cross-over with DJ Ge-ology.

If these ambassadors provided the sights and sounds that made the party bop, it was Chivas global mixologist Max Warner who did the most to keep every party-goer’s spirit up with a free flow of several delectable cocktails he concocted just for the Hong Kong Chivas Studio.

The Malaysian media contingent was also treated to the Chivas 18 Gastronomy Dinner – an exquisite 18-course menu comprising six starters, six main courses and six desserts, all linked in some way to the taste and tradition of Chivas Regal whisky. Each course was, of course, washed down with either one of Max Warner’s Chivas-based cocktails or sips of Chivas whisky.

Even the desserts were appropriately flavoured, with Chivas jelly sprinkled with real gold leaf, Saint-Felicien cheese, plus several other more conventional sweets, all washed down with more 18-year-old Scotch.

Pernod Ricard Asia’s vice president of marketing, Bryan Fry, was elated by the success of Asia’s first Chivas Studio, which was just a taste of even better things to come. Like, for example, a Chivas Studio Malaysia next year.

Since the first Chivas Studios caught the imagination of the party set in the United States and Europe, the concept has continuously evolved.

Each one is different in design and style, with new elements added to reflect the city and country that is playing host.

The Chivas Studio events define the core values of the brand, Fry said, and “create a showcase for Chivas and, at the same time, offer a venue for friends to share good times.”

I’ll drink to that.