‘Tis the season for eggnog NOTHING welcomes your guests as invitingly as eggnog as they come through your door during Christmas.

It’s a tradition that hails back to medieval times when guests entering a house from the cold were treated to a noggin of hot spiced beverage made up of eggs and milk spiked with copious amounts of spirits. The ingredients for eggnog are simply eggs, heavy cream and sugar, as well as nutmeg and rum. — Photos: YAP CHEE HONG/The Star

I had my first taste of eggnog when I was living in the United States, and I must admit I thought it tasted like a child’s drink. It was sweet, milky and heavily spiced but because it was store-bought eggnog, it didn’t have any alcohol in it.

Only when I tasted home-made eggnog that I began to understand why it brought such heart-warming nostalgia.

It is rich and decadent, but nutritious and flavourful at the same time. Though it is childishly cradled in a fun little cup, it has enough punch to put down an elephant.

The biggest concern in home-made eggnog is the use of raw eggs. Although this is not an issue for most people as the sheer amount of alcohol kills all the bacteria, those who opt for alcohol-free versions will be at risk with the presence of pathogens such as salmonella. 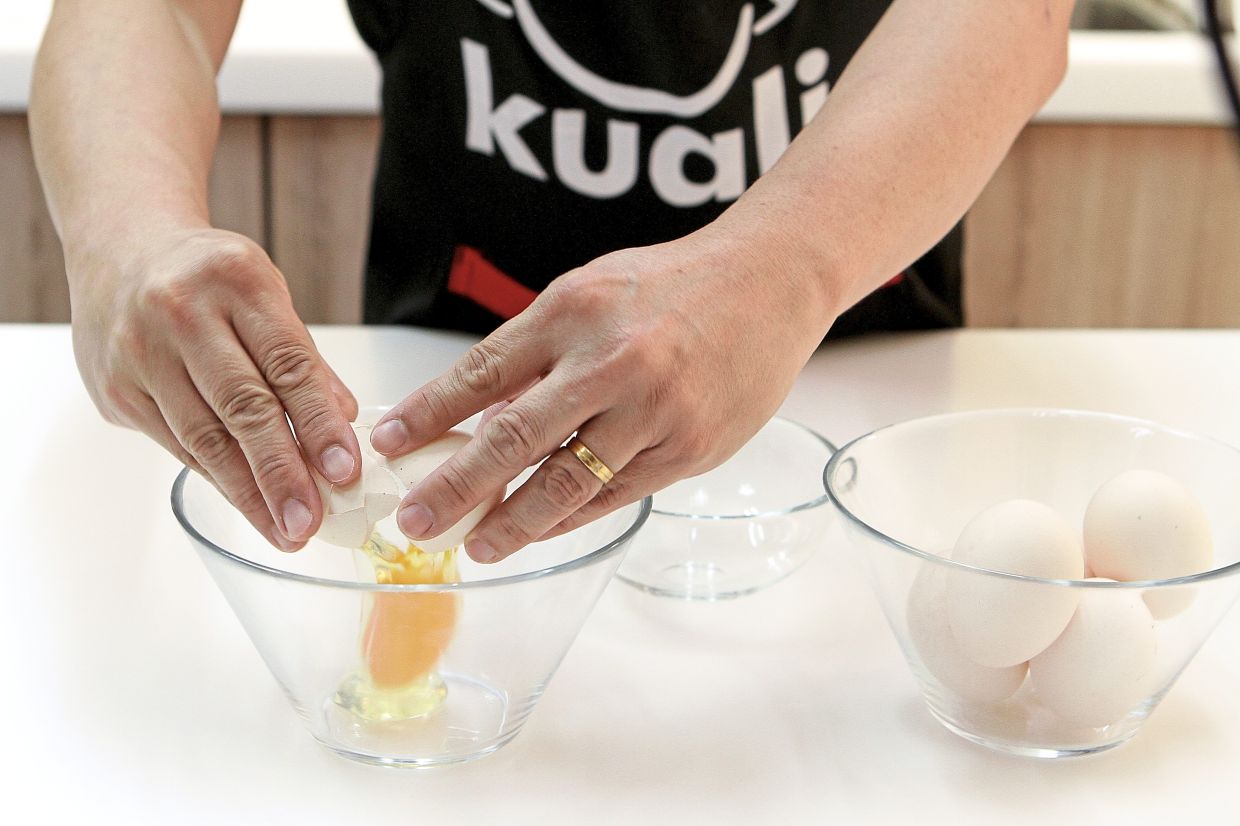 Eggnog requires egg yolks that are tempered in hot cream plus egg whites that are whipped and folded in before serving.

Modern recipes now call for the eggs to be cooked and the alcoholic eggnog to be kept refrigerated until ready to be served.

Researchers have found that alcohol completely sterilises a heavily spiked eggnog when aged for more than three weeks.

When using this recipe, make sure the cream is scalded just before it comes to a boil, when it’s hot enough to kill the germs but not too hot that it will burn or curdle the eggs. Whip the egg yolks with icing sugar until it becomes thick before tempering with scalded cream.

Then gently drizzle the hot cream in a steady stream into the egg yolks as they are being whisked. The heat will cook the egg yolks while the whisking stops it from curdling, thereby creating a smooth sabayon for the eggnog.

To sterilise the egg whites, whisk the liquor into the meringue when it has reached the soft peak stage. Then fold the meringue into the sabayon and keep the eggnog covered in the refrigerator until ready to serve.

I like this ratio of alcohol to the egg, sugar and cream mixture, although some people may prefer it a bit more boozy. You may add, perhaps, an additional half-a-cup of spirits, but I find that it gets more bitter with more liquor. Whip egg whites until it forms soft peaks before folding the meringue into the eggnog.

The traditional spice flavouring for eggnog is nutmeg, although some versions recommend mace, cinnamon or a combination of these spices.

I like to use fresh nutmeg that I get from Penang, and I will grate it directly into the eggnog. Be sure to crack open the shell first and use only the soft core of the seed.

For me, the grated nutmeg is garnish enough over the frothy eggnog, but you may like to add a cinnamon stick or a mini candy cane to make this welcoming drink a truly festive treat for your guests. Chill the eggnog in the refrigerator for at least three hours before serving with rum and grated nutmeg.

Whisk egg yolks with icing sugar until it forms ribbons, about five minutes in a stand mixer on high speed.

Scald cream until it starts to bubble but not boiling. While whisking egg yolks on medium speed, gently pour in the hot cream in a steady stream until combined.

Season sabayon with freshly grated nutmeg or half-a-teaspoon nutmeg powder, and refrigerate for at least three hours until fully chilled.

When the sabayon is chilled, whisk egg whites to soft peaks, about two minutes in a stand mixer on high speed. Then turn the speed to low, and gently pour in the liquor until combined. Be aware that the meringue will collapse a bit. Fold the meringue into the sabayon and keep refrigerated until ready to serve.

To serve, pour into a punch bowl and garnish with grated nutmeg all over the top of the eggnog. Serve cold in small cups or glasses with a sprinkling of nutmeg over the froth.