PECAN pie is quintessentially an American dessert often served during Thanksgiving, which is celebrated on the fourth Thursday of November.

I was introduced to this sweet pastry at my first Thanksgiving dinner during my tertiary days in Texas, and I knew I had to learn how to make it.

This is the time of the year when ripened pecans fall off the trees, and we used to harvest the nuts from the ground before squirrels stowed them away for winter or were crushed by passing vehicles.

The recipe is fairly simple.

The hardest part was cracking the shells to remove the pecan kernels and keeping as many intact halves as possible.

Since pecans are not grown in this part of the world, the ones sold are already shelled, making it more convenient and inadvertently more expensive. Roll out the chilled dough to about half a centimetre thick between two sheets of parchment paper for easier transfer into the tart tin.

If you have never tried pecan pie, this is a real treat.

Walnuts are the closest substitute if pecans are not available but they do not lend that sweet flavour and fluffy texture that you get from the latter.

The key sweetener in pecan pie is a syrup, either corn or maple.

Golden syrup or honey can be used as a substitute sweetener with just a slight difference to the taste of the filling. 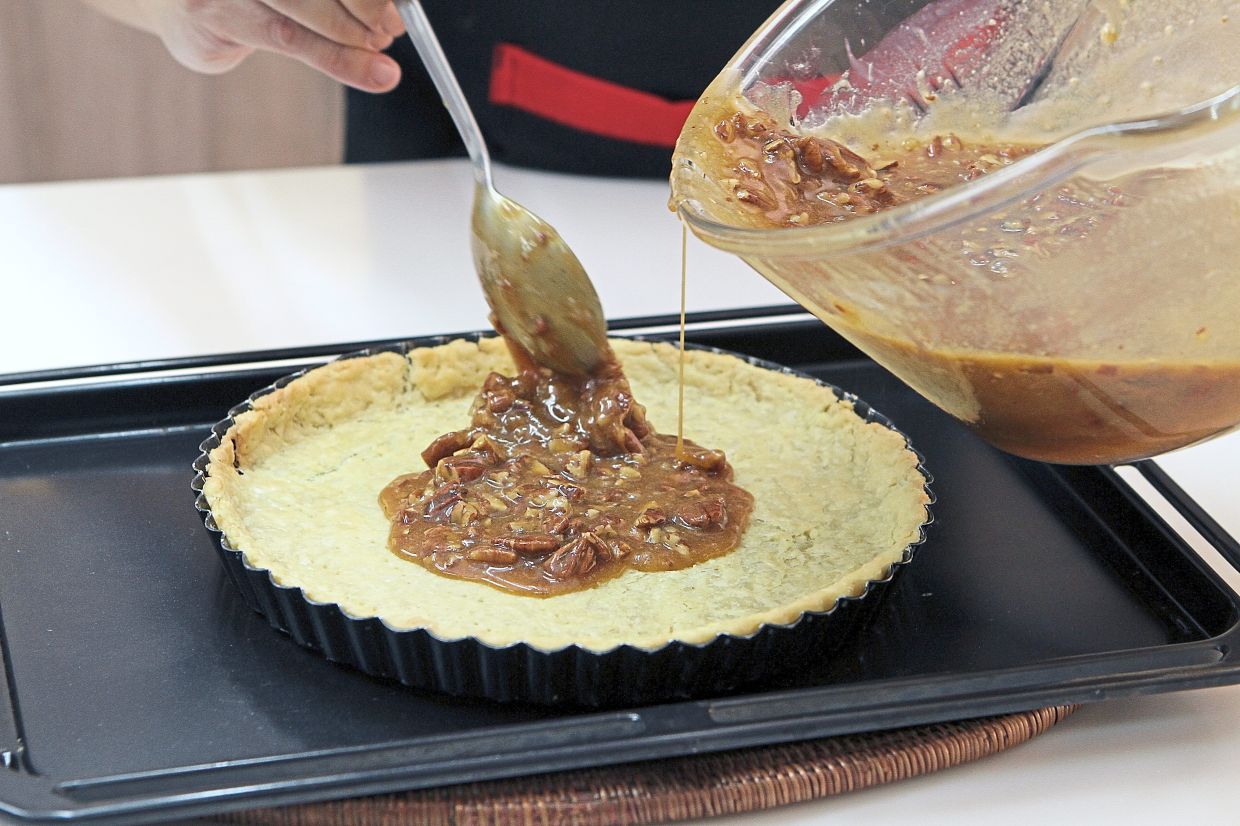 Fill the baked pie crust only after it has cooled down or the hot crust will absorb all the liquid.

Unlike shortcrust pastry, which the Europeans prefer for their pie dough, the American recipe calls for more flour and water and less butter.

Although the amount of water makes the dough easier to handle, one needs more care to handle it lightly so as not to overwork the gluten.

Because the dough has less butter, you can blind bake it without any weights.

Do remember to prick the dough with a fork before baking to ensure that the steam can escape and to prevent the dough from puffing up too much.

There is enough dough and filling for two pies using this recipe if you use 22cm tart tins with removable bottoms. 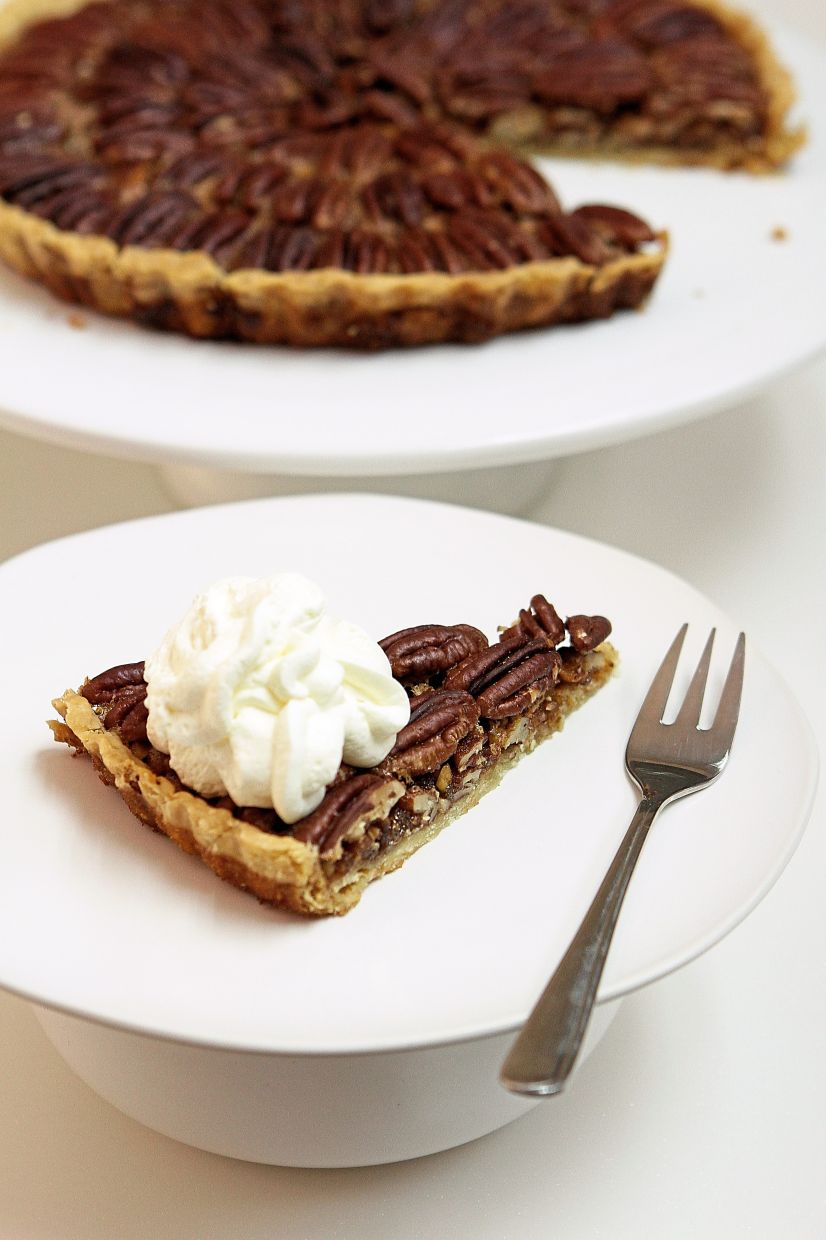 Pecan pie is traditionally served with a dollop of whipped cream for Thanksgiving.

The filling can also fit into one deep pie dish.

The excess dough can be used to form a ruffled border along the rim.

All you need is about 120g of whole pecan halves if you choose to make one large pie.

Pecan pie is usually served with a dollop of whipped cream or vanilla ice-cream,

both of which are selected for their neutral taste to enable the flavours of pecan and syrup to shine. 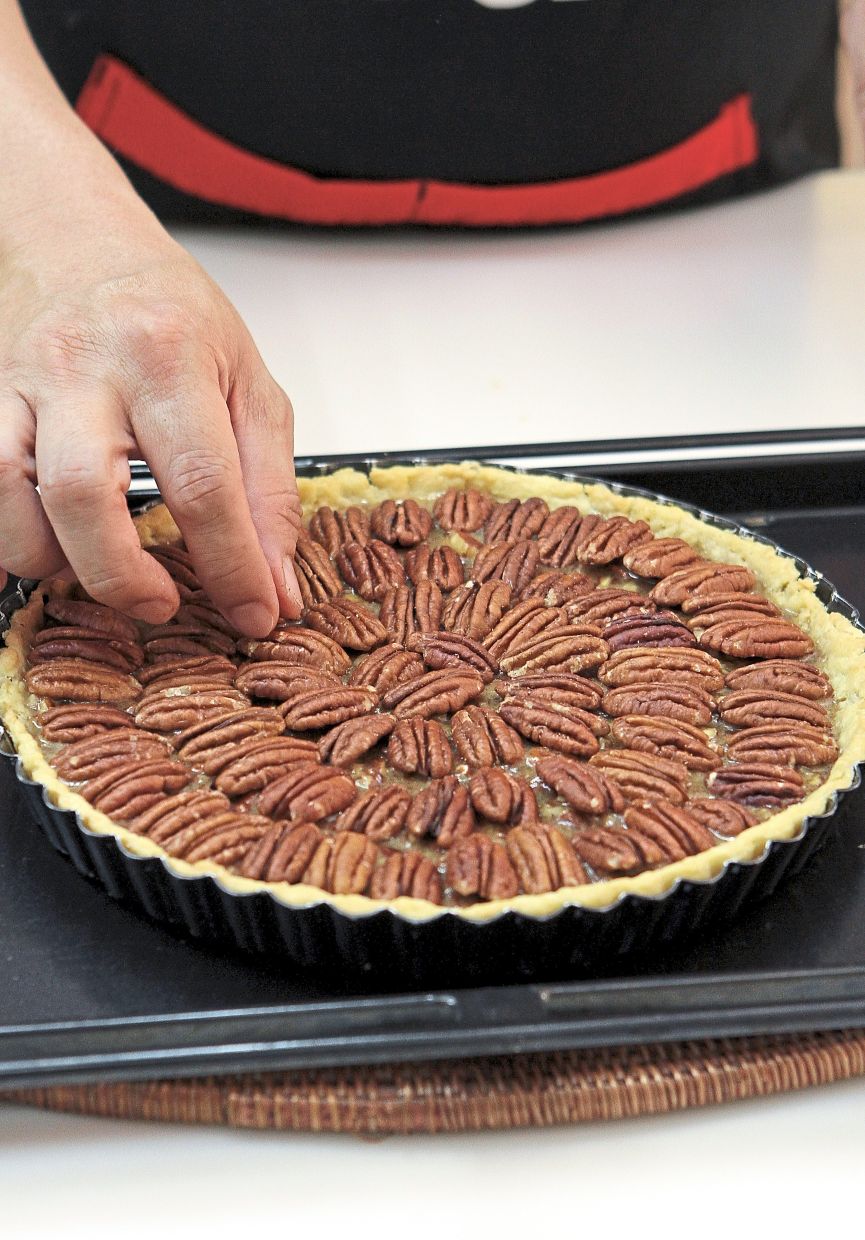 Reserve whole pecan halves to decorate the top of the pie.

Sift flour and salt into mixing bowl. Rub cubes of cold butter into the flour to form flakes.

Sprinkle water into the dough, lifting with a fork to allow the moisture to spread.

When you can gather the dough into a tidy ball, stop handling it.

Divide dough into two, press down into a flat disc and wrap each disc individually in parchment paper and chill in the refrigerator for at least an hour to rest the dough.

To roll out the dough, place the chilled disc between two sheets of parchment paper, and gently press the rolling pin down from the centre until the dough is rolled out to slightly less than half a centimetre thick.

Trim the excess dough from the rim and patch any tears and gaps with the trimmings. Then prick the dough with a fork.

Repeat the process with the other chilled dough disc.

In the meantime, prepare the filling by beating eggs with brown sugar, syrup and melted butter. Then stir in chopped pecans, salt and vanilla.

Once the pie shells have cooled down, fill with pecan filling almost to the rim.

Then arrange whole pecan halves in a pretty circular pattern on top of the pie.