Hearty dishes fit for the celebration

ONE must eat well during Chinese New Year.

This advice is symbolic of the fact that a festive fare must taste as good as it sounds or look to achieve overall satisfaction.

At Yu Bao Seafood Restaurant in Palazzo 19, the festive menu has several perennial favourites, one of which is the steamed chicken rice.

The chicken served here is free range from Pahang. Its bright, yellow-hued skin is because of an exclusive diet of Napier grass and sweet corn without growth hormones and antibiotics.

In addition to a rich chicken stock, the rice is cooked with generous dollops of margarine, garlic and lemongrass. Grated pineapple give the chilli sauce its fruity tang, Bentong ginger and the white part of spring onions provides extra zing. 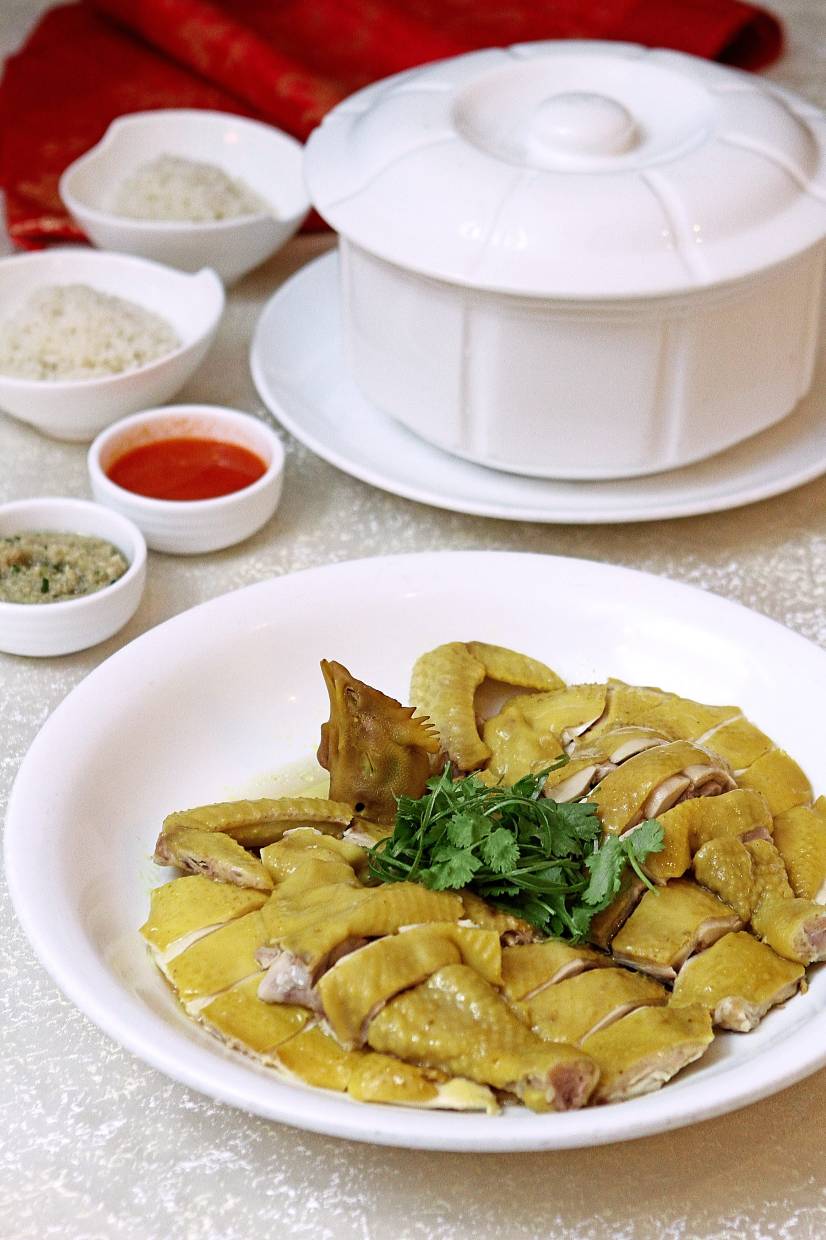 It is sourced from a waxed meat producer in Hong Kong. The restaurant added a lingering aroma of Rose Dew rice alcohol in the liver sausages and an 80% ratio of lean meat in the dried pork sausages, which are only brought in for the yearly celebratory season.

Contrary to its moniker, the duck is not from London but Ireland, and a cultivated hybrid of the Peking and Aylesbury species.

Sporting a layer of thick, white fat between skin and flesh, these are served in most of London’s Chinese restaurants.

There is no gaminess in the meat and restaurant manager Karen Tan said gourmets have hailed it as the world’s best tasting duck, a title that is largely subject to the cooking skills of the chef, of course. For dessert is the famous nian gao, steamed and covered in fresh, juicy coconut shreds and deep-fried in yam and sweet potato.

The yam is imported from Thailand as the flesh from this variety is known to loosen up in the hot oil resulting in a softer mouthfeel.

Another notable dish is the Boston Lobster Yee Sang. A combination of red coral lettuce and a julienne of sweet and sour fruits gave the dish a crunchy element. Even the flame jellyfish of the rhopilema esculentum species was chosen specifically for its flower-like shape and texture.

Chef Chai Wan Long said it took him a month to come up with the perfect combination using ingredients like water apples, half ripe papaya and mango. To preserve its sweetness, Chai said the lobster should not be submerged in boiling water for more than 15 minutes.

A double-boiled soup featuring a whole chicken with fish maw and wolfberries make for an ideal addition to the festive menu.

The dragon grouper makes a debut on steamed egg accompanied with a simple but appetising soy sauce. The fish is a hybrid of the brindle bass and garoupa. Tiger prawns with sliced arrowroot and truffle sauce, another dish unique served only during festive seasons, also makes it into this year’s festive menu.

The prawns were sweet and succulent. The truffle sauce was oaky, nutty, earthy with slight notes of black olives.

The poon choy, available for dine-in and takeaway must be ordered three days in advance. It was another winner with whole abalone, fresh New Zealand mussels, fish maw and sea prawns.

The gravy derived from a five-hour reduction process of a stock made from pork belly and an old hen – pre-boiled to rid the bones of raw marrow – was unforgettable.

This menu is available until Feb 9.