Excessive intake of fried foods can cause cardiovascular diseases and cellular damage. Wrinkled skin in old age can also be traced to high consumption of these foods when younger. — SHARDAR TARIKUL ISLAM/Unsplash

It was a quiet Chinese New Year here in France, with just my wife, dog and myself having a casserole for the Reunion dinner on the eve, followed by vegan meals for the New Year itself. To be honest, I was rather envious of the pictures of sumptuous dinners and meals posted by family, friends, and ex-classmates in Malaysia. The images and well wishes do remind me of the significance of what it means to be Chinese during the Lunar New Year.

The Chinese ascribe a lot of importance and symbolism to their food, especially during the Lunar New Year. Eating dumplings is supposed to confer wealth, and so does spring rolls. Having a whole steamed fish is allegedly linked to an increase in prosperity and glutinous rice cakes are purported to lead to a higher income or promotion at work.

Longevity noodles are claimed to do what the name suggests and sweet rice balls in warm syrup symbolises family togetherness. All these is augmented by fruits which are reputed to bring good fortune, such as golden mandarins and oranges.

The symbolism must be working because over a billion people do make some sort of effort to dine accordingly during the Chinese New Year. In my case, I had a few more clementines than usual, and I made some spring rolls for dinner. It was just a little gesture to remind myself that I have not forgotten my roots totally, even in the middle of a cold winter here.

However, before we all go back to our usual dietary habits after the holidays, I thought it would be helpful to point out and review some common food items which may become rather inauspicious if we ate too much of them, especially from a health perspective. And it is not the worst idea to adopt a new year resolution to be more aware of what certain foods may be doing to us, and especially our immune systems, after ingestion.

This may be particularly relevant at times like these, with a coronavirus still circulating virulently through many populations; our first line of defence should always be a robust immune system in our bodies.

So, the following are some food items which can lead to health issues if consumed in excess. Top of the list must be added sugar and foods with a high glycaemic index (HGI). There are countless studies which have proved that limiting consumption of added sugars and HGI foods is simply good for human health. There are several compelling reasons for this.

Added sugars and HGI foods raise blood glucose levels, and this can lead to an impairment of the immune system due to the associated production of inflammatory compounds such as tumour necrosis alpha, C-reactive protein, and interleukin-6.

Excess sugar can also alter/damage the flora in the human gastrointestinal microbiota (HGM), affecting the immunity conferred by the HGM. There seems to be no good justifications whatsoever for excessive consumption of sugar, from a health point of view.

The next item to be wary of is excess salt as research has shown that high-salt diets can trigger tissue inflammation and increase the risk of autoimmune diseases. A small experiment in 2016 found that men on high-salt diets had higher levels of monocytes and inflammatory markers IL-23 and IL-6.

They also had lower levels of the anti-inflammatory protein IL-10, which is indicative of an excessive immune response. Supporting this was a 2019 paper from Oxford University which found that excess salt had a negative effect on human immune systems and is linked to inflammatory kidney disease.

Food, and especially oils, which are high in Omega-6 fats are linked to dysfunctional immune systems. To be more correct, it is the ratio of Omega-6 and Omega-3 fats which causes issues with the immune system.

In our distant evolutionary past, the ratio of O-6 and O-3 fats tended to be 1:1 because of the foods available then. Now, particularly with modern processed cooking oils such as corn oil, soybean oil, sunflower oil, etc, our foods contain much more O-6, tilting the ratio to as much as 9:1 or even 12:1 of O-6 vs O-3. 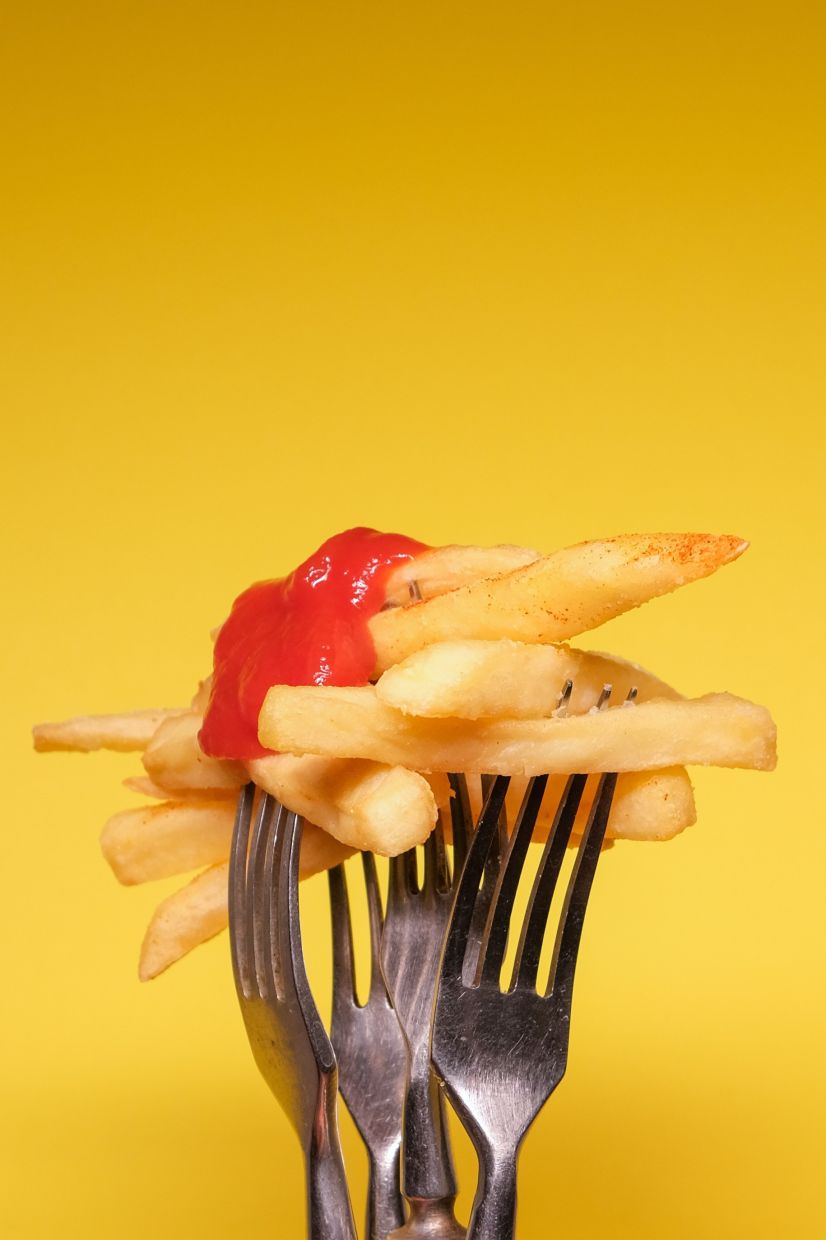 The cellular dysfunction provoked by AGEs can also lead to cancers and cardiovascular diseases. —ALENA SHEKHOVTCOVA/Pexels

Foods cooked at high temperatures (roasting, grilling, frying, baking, etc) undergo the Maillard Reaction, where proteins/amino acids react with sugars and fats to produce Advanced Glycation End products (AGEs). These AGEs are the brown and dark compounds which colour cakes, grilled meats, charred vegetables, etc. They are often delicious and form an integral part of the flavour of many dishes.

However, AGEs have a less attractive side because they cause cellular damage, inflammation issues which can affect the immune system, and often problems with the HGM. The reason for wrinkled skin in older people is due significantly to the AGEs ingested when younger, for example. The cellular dysfunction provoked by AGEs can also lead to cancers and cardiovascular diseases.

Foods fried in polyunsaturated oils (the type of oils most used by fast-food chains and at home) are even worse as polyunsaturated oils decompose readily into free radicals which can increase the damage caused by ingesting AGEs. This combination has several negative impacts on the body, including inflammation and reduced effectiveness of the immune system.

One should never look at a food label and enjoy seeing a long complex list of ingredients and additives. There is a good reason for this. Many additives are simply bad for human health if consumed excessively. The problem is defining what is meant by “excessively”, because different people have different tolerances for various compounds.

Example common additives include sodium nitrite (used to preserve meat and keep it looking pink) and polysorbate-80. We eat sodium nitrite almost every time we eat bacon, sausages and preserved/canned meats and this compound has been linked to colorectal cancer. Eating a few grams of treated meat a day has been linked to increased risks of colorectal cancer. —MATEUSZ DACH/Pexels

The WHO now classifies meats treated with sodium nitrites as Group 1 carcinogens and eating a few grams of such treated meats daily is linked to a 15% increase in colorectal cancer rates. Therefore, a certain percentage of humans are clearly susceptible to cancer due to processed meats, but we do not know how much processed meats they have been eating, and it is highly unlikely they all have the same sensitivity to sodium nitrite.

Polysorbate-80 is used as an emulsifier for common stuff such as whipped cream, dessert mixes, ice cream, etc. By itself, it is noted as carcinogenic to mice, but a potential problem is the contaminants associated with polysorbate-80, such as ethylene oxide and 1,4-dioxane. Both these compounds are known to be hazardous for human health and they have been detected in food items. Safety therefore depends on the sources of polysorbate-80 used by food producers.

I was once shopping for coconut milk and saw a tin containing E433 as an additive. I quietly put the tin back. E433 is the code for polysorbate-80, and E250 is sodium nitrite.

Many years ago, artificial sweeteners were blamed for all kinds of diseases, but the consensus now is that they are generally safe. By this, it is understood that they are not actively toxic to humans if consumed within reasonable limits. However, it is now also acknowledged that artificial sweeteners can also induce imbalances in the HGM, which in turn can have a negative effect on the human immune system.

Estimates vary very widely, and they also depend on the target pathogens, but some claim the HGM to be the foundation of up to 70-80% of the immune system in the body.

Realistically, much of the HGM-derived immunity would be utilised to combat pathogens in food and not necessarily connected with, say, targeting viruses in the lungs or blood, but a defective HGM would necessarily drain resources from the rest of the body’s immune system and weaken it.

A recent chat with a scientist friend in Berlin led to a fascinating paper about the role of curcumin in combatting Covid-19. A study has claimed that this natural compound (derived from turmeric) is able to tackle inflammatory diseases via its various antiviral, anti-inflammatory, anticoagulant, antiplatelet, and cytoprotective properties.

A significant part of the paper was based on “in silico” research; ie, using sophisticated computer models supported by real medical outcomes, and the findings are plausible enough that I myself would try curcumin if I caught a cold or flu.

And if I do, then I would take curcumin with some mashed pineapple as another paper found the enzyme bromelain found in pineapples substantially increases the absorption of curcumin.

Finally, I wish everyone celebrating the Lunar New Year all the best for the Year of the Tiger, and everyone please stay safe, healthy, and prosperous (naturally).