While dark chocolate is high in polyphenols and antioxidants, its high sugar content makes it a less attractive option on the health front. — CHARISSE KENION/Unsplash

My injured knee is still not fully healed yet, and I have been advised to keep moving on it lightly so that meant doing less research on my desk computer. Which is fine, as there are a lot of interesting things to discover on a tablet on a park bench or from the phone.

And one interesting subject was metabolomics, which is the study of metabolites, or transformed residuals of food which has passed through the human digestive system. Probably you have heard of nitrosamines which are the metabolites of sodium nitrites and other preservatives used to keep processed meats looking fresh and attractively pink.

However, nitrosamines are known to be dangerous to mammals and have been linked to various cancers, so the general advice is to avoid preservatives in your meats if possible.

But there are many, many other beneficial metabolites, such as amino acids, phenolic acids, lipids, sphingomyelins, glycerides, etc. In fact, the body relies heavily on metabolites after digestion to be able to manufacture the hormones, proteins, and other compounds (such as antioxidants) needed for maintaining a healthy complex organism. Food is not just for provision of energy within the body, and what one eats affects health, sense of well-being, moods, and risk from various diseases. Although olive oil is touted as being a polyphenol-rich ingredient, in actual fact, it contains less polyphenols by weight than apples and green tea. — ROBERTA SORGE/Unsplash

And it seems it is never too late to change or improve one’s dietary habits. A recent paper from the University of Barcelona claimed that plant-based diets reduce the risk of cognitive impairment and dementia, even in older people.

However, the good news is that foods that result in beneficial metabolites are usually tasty, or commonly used to add attractive aromas to food when cooking or serving. One might suggest that humans have recognised the benefits of such foods for a long time, which may be why they are almost always as pleasurable to consume as they are healthy.The search for polyphenols and antioxidantsA simple place to start may be looking for foods with a high content of polyphenols. And interestingly as mentioned, foods which are high in polyphenols are quite often also high in beneficial antioxidants.

To help with research on this subject, the EU has developed a database called the Phenol-Explorer where practically all known polyphenols and metabolites arising from ingesting various polyphenol-rich foods are catalogued in an easily searchable database.

However, before we look at a deeper analysis of the richest polyphenol foods, we can refer first to some common conceptions we hold about such foods. In the past, many journals and articles have frequently suggested foods such as apples, chocolate, olive oil, red wines, green tea, etc, as rich in both polyphenols and antioxidants.

To validate this, we can query the Phenol-Explorer.eu database and then we will arrive at the following data: 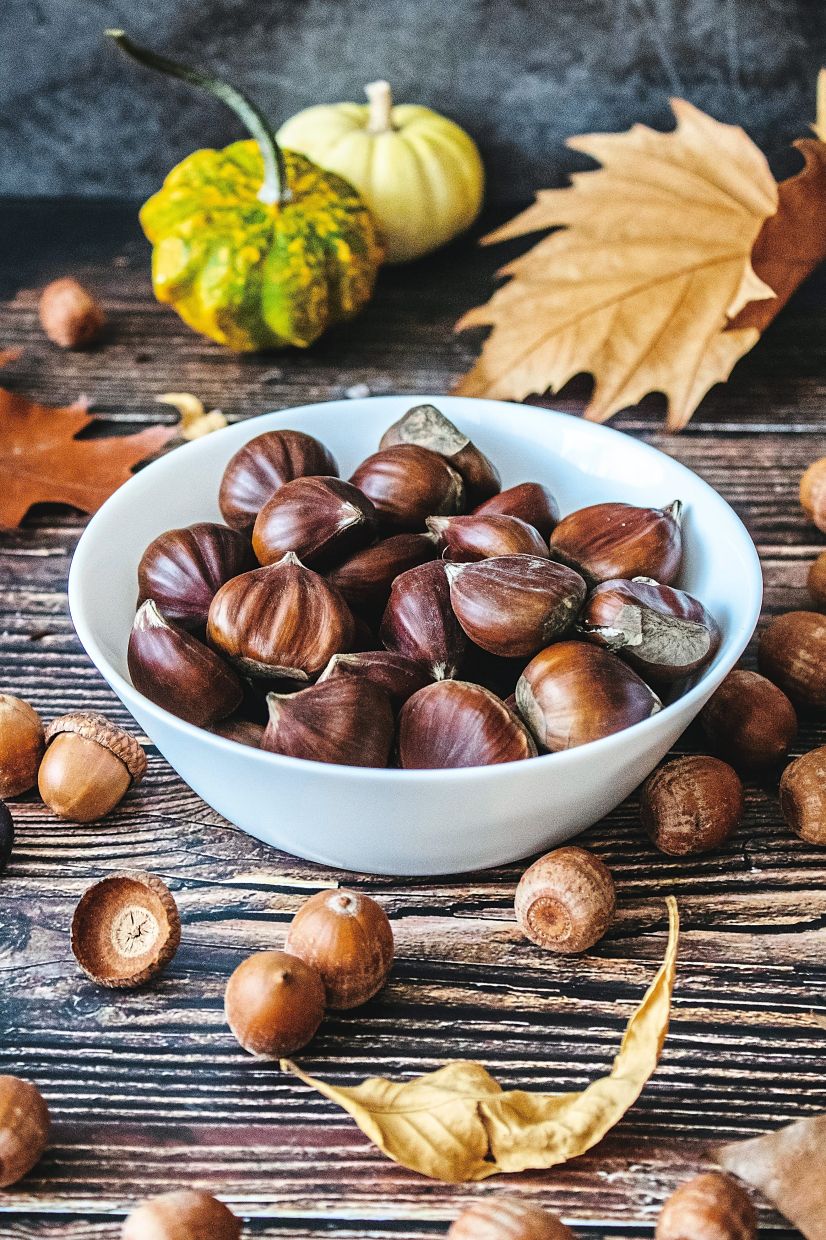 Nuts, especially chestnuts are a good source of polyphenols and antioxidants. — TIJANA DRNDARSKI/Unsplash

Therefore, it would be quite hard to estimate the true dietary benefits of the various foods. Also, the various (often unscientific) claims made for lots of foods make it hard to establish with any confidence the impact of each item. And for dark chocolate, the normally high sugar content would also usually have a negative dietary and health impact.

Therefore, a suggestion may be to mix various foods with relatively high amounts of polyphenols and antioxidants.

A palette for cooks

Reading deeper into the subject also uncovered some interesting facts, especially about some cooking spices which are often used in home kitchens. Top of the list for polyphenol and antioxidant content are cloves, with a staggering 15,188 mg of polyphenols and 16,047 mg of antioxidants per 100 grams. Cloves are one of the cooking spices that have high amounts of antioxidants and polyphenols. — AFIF KUSUMA/Unsplash

I love the scent and aroma of cloves and it was interesting to realise that just one gram of the spice can add 1,519 mg of polyphenols and 1,605 mg of antioxidants to any dish.

Other significant sources of polyphenols and antioxidants are dried peppermint, star anise, sage, rosemary, and thyme.

Parsley is curiously not a huge source of polyphenols but a potent source of antioxidants, as are dried basil leaves.

All are spices which are commonly used in cooking, apart from dried peppermint which is used in herbal teas.

Nuts are also usually a good source of polyphenols and antioxidants, particularly chestnuts, which is handy around wintertime here.

Hence it is quite easy to create a palette of various kinds of polyphenols and antioxidants to be made available at every mealtime. The latest evidence suggests that offering such a dietary palette may be delicious protection against cognitive decay in old age.

One of my favourites spices to perfume a dish or jazz up a tart is powdered cinnamon, but one must be a little careful. The following is a condensed history of cinnamon.

By the middle of the last century, most of the cinnamon used around the world came from Vietnam, usually called Saigon Cinnamon (Cinnamomum loureiroi).

This cinnamon was the inner bark of an evergreen tree and contained high amounts of essential oils, notably a scented flavonoid called cinnamaldehyde.

However, the USA imposed an embargo on Vietnamese cinnamon in 1964, and this forced suppliers to look elsewhere for supplies of cinnamon. Cinnammon powder is often not exactly what it seems. — RUBY SENGAR/Pexels

They eventually settled on a botanical cousin of the Saigon Cinnamon, called Korintje (Cinnamomum burmannii), grown in Indonesia.

I suppose even the Indonesians were surprised by the demand for Korintje because it was a bitter plant, with a rather poor taste. This was remedied by grinding Korintje and blending it with powdered fillers such beechnut husk, ground shells of hazelnuts and/or almonds, and then flavoured with cinnamaldehyde.

This horrible-sounding powder is still sold in many parts of the world, and now identified by many as “cinnamon”, especially in the USA. Another more recent major source of poor culinary cinnamon is from the Cassia plant (Cinnamomum aromaticum), which is mostly grown in China and is slowly making inroads into the global food market. The ban on Vietnamese cinnamon was lifted in 1994 and some cinnamon is now also exported from Vietnam.

Of special note is Ceylon cinnamon (Cinnamomum zeylanicum, or Cinnamomum verum) from Sri Lanka. This is possibly the most fragrant cinnamon of all, with a well-balanced mix of essential oils, and should be the type used by top bakers and cooks.

It also has one other advantage over the other cinnamons. There is a potential health issue which involves a toxic compound called “coumarin”, which is found in all types of cinnamon except Ceylon cinnamon. Coumarin has been banned for human consumption in the USA since 1954 and is subject to rigid regulations in the EU.

Coumarin (also known as 1,2-benzopyrone) is potentially toxic to human livers and kidneys, especially at doses higher than 293 mg per kilo of body weight. However, unless one is very small or young, eating cinnamon is not normally a risk. The coumarin content is 2.15 grams/kilo for Korintje, 6.97 grams/kilo for Saigon cinnamon, 0.31 grams/kilo for Cassia cinnamon and a negligible 0.017 gram/kilo for Ceylon cinnamon.

The recommended EU maximum daily dose allowed for coumarin in humans 0.1 mg per kilo of body weight though this limit may be exceeded occasionally.

If you are a fan of Tonka beans, be wary as they also contain high concentrations of coumarin.

At this point, I would like to wish all readers season’s greetings and for everyone to have a better new year 2022 than the previous one.

Curious Cook: Bird flu may be forever
How Malaysia's best cocktail bars survived the pandemic
The dangers of being too reliant on monoculture and genetically modified food
Curious Cook: The future is quite certain and it doesn't look good
Coffee's effects on blood pressure and blood sugar
Curious Cook: A perfect storm that threatens human existence is brewing
Save your child from a lifetime of craving sugar
Classes of glasses: The unique glasses used for cocktails and drinks
From Martinis to Spritzs, there is more to vermouth than you think
Curious Cook: Ice cream and metabolic syndrome