Our columnist analyses some food studies and other reports, including the fact that eating five portions of fruits and vegetables is linked with longer life spans.

It is springtime and I am writing this in the UK, where I returned a fortnight ago for the first Covid-19 inoculation last weekend. It was a tiring journey by car, not improved by the requirement for multiple Covid-19 tests every few days and a mandatory 10-day quarantine period at home.

After the vaccination, I felt a little rough, but nothing troubling, a bit like the feeling one gets when overeating and over-drinking the day before. Well, mostly like over-drinking to be more accurate and my upper left arm also feels like it had encountered a degree of blunt force trauma.

My family had advised against consuming alcohol after the vaccine, and some quick research proved they are more well-meaning than scientific as there is no real evidence alcohol interferes with the production of antibodies due to vaccines.

However, alcohol can either obscure or aggravate any significant negative side effects, and this introduces an unnecessary element of risk. So, a suggestion might be to avoid alcohol until all side effects have died down after a vaccination. This is therefore my third day without a bottle of wine.

The disruption to the normal routine meant less reading of research papers and food news. But there are still a few snippets worth reporting.

One is the findings of a longitudinal study conducted over 30 years on more than 100,000 Americans. This study was then validated against other longitudinal studies which encompassed almost 1.9 million people in 29 countries in Europe, Asia, Africa, Australia, and North America. If you are not sure what a longitudinal study means, please refer to my previous article ‘A Diet of Plastics’.

The findings were nothing remarkable, but it does reinforce and refine a simple daily dietary recommendation, which is: eating five portions of fruit and vegetables a day is statistically associated with humans living longer.

Or put another way, eating less than five portions of greens and fruits daily is inversely associated with elevated death rates; in short, the less greens and fruits one eats, the higher the risk of early mortality.

Additionally, the consumption pattern with the lowest mortality rate was found to be two servings of fruit and three servings of vegetables daily. And consuming more than those portions did not result in any significant reduction of mortality. This is interesting because an earlier Oxford paper concluded that more than five daily portions of fruit and vegetables can confer additional health benefits, but it probably did not result in a further reduction in mortality.

So, even during these tough days of lockdowns and restrictions, please do try to eat some extra vegetables and fruits regularly, even if they are purchased as frozen foods. 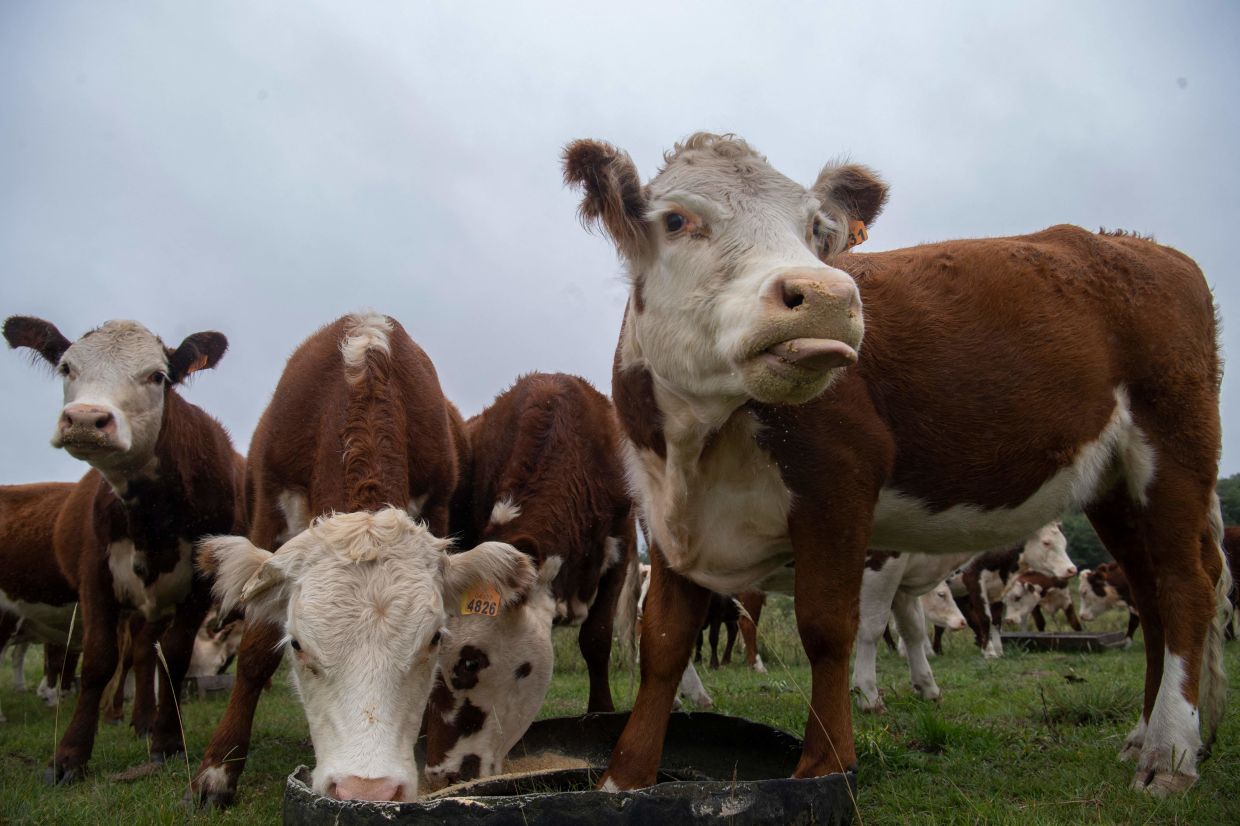 A recent paper reported that relatively small amounts of a red macroalgae, particularly a seaweed called Asparagopsis taxiformis, introduced into feed can reduce the amount of methane generated by cattle. It was interesting to read that adding just 80 grams of this seaweed into the daily feed reduced the amount of methane production by 82% or more, whilst having no discernible effect on weight gain and meat production.

The reason why this happens is because of halogenated compounds found in seaweed from the Asparagopsis genus. The process of methane production within the digestive system of cattle is called methanogenesis, which is catalysed by a bovine enzyme called methyl-coenzyme M reductase (MCR).

Research into the use of seaweed for methane reduction has been ongoing for over a decade but curiously there is little momentum in pushing for the inclusion of seaweed into cattle feed, despite the huge environmental benefits. Currently, it is estimated that cattle pump out the equivalent of an estimated 4.65 billion tonnes of carbon dioxide (methane has a higher effect as a greenhouse gas than CO2) every year into our atmosphere.

There may be some explanations for this tardiness, though none of them are good. One is of course the additional costs to the cattle producers of acquiring and distributing Asparagopsis-based products into cattle feed.

Another is that one of the halogenated compounds, bromoform, is suspected to be potentially hazardous to humans and laboratory mammals. However, tests have found that all the edible parts (including offal) of cattle fed with seaweed do not contain any detectable levels of bromoform.

Iodine seems to provide another excuse for inaction. Seaweed also contains iodine and introducing seaweed means that cattle is likely to be fed more than the current recommended amount of iodine which is set at roughly 5 milligrams per day with a maximum limit of around 500 milligrams per day. Seaweed would introduce around 160 milligrams of iodine per day which is below the maximum limit but significantly above the recommended level (which appears to have been set arbitrarily).

This impact was evaluated and it was found that infants under three years old would have to eat around 1.5 kilos of beef a day to exceed the recommended maximum for infants, while adults have to consume over 8 kilos daily to do the same for adult limits. Such levels of meat consumption would be very significantly more dangerous than the iodine content itself. And in fact, it was also suggested the introduction of iodine into meat can be beneficial to the health of communities with little access to seafood.

Despite the current inertia, it should be a matter of time before Asparagopsis-based products will be routinely introduced into cattle feed. There are no detrimental human health effects, there is no difference in quantity and quality of beef products and the opportunity to eliminate billions of tonnes of greenhouse gases should not be ignored for long.

However, this inaction can persist for many more years; the data about cattle methane gas reduction has been known for over a decade but meat producers and governments have simply ignored it. Hence, if one wants to make a statement against such environmental irresponsibility, then the best option currently is to reduce meat consumption, particularly beef, and replace it with plant-based ingredients. It is the logical response to a flagrant, unnecessary abuse of our planet, and it can also improve your health.Pandemic

As I am here because of a pandemic caused by a zoonotic disease linked to human interference in wildlife habitats, it was interesting to review recent mathematical and genomic studies on the SARS-CoV-2 virus (the cause of Covid-19). This is because the current health crisis may help us prepare for the next zoonotic pandemic. The way humans are encroaching on pristine wildlife environments makes another pandemic within less than a century almost a certainty.

One item of good news is that models suggest that pandemics do not always result from individual dangerous, infectious pathogens. It appears that several things need to fall into place before a pathogen can gain a foothold in the general human population.

Epidemic simulations for assorted pathogens based on various factors such as transmissibility, survivability, lethality, etc, suggest that pandemics only happen 29.7% of the time, regardless of the characteristics of the modelled pathogen. Mostly, potential epidemics die out after relatively few deaths and the average failed epidemic ends roughly eight days after the first case.

This was of course a mathematical viewpoint, but it is supported by new evidence uncovered just last week. It was a research report based on using sophisticated molecular dating tools to investigate how long SARS-CoV-2 may have been circulating in Wuhan before discovery. The data suggested the virus was present by mid-October 2019 before it started to take a significant hold around a month later.

Even so, it was estimated that by 17 November 2019, only four people were infected and just nine persons were affected by 1 December 2019. If minor changes to the circumstances of these infected people had applied, such as less crowded housing or better sanitation or staying longer indoors, then the current pandemic may not have started.

The bad news is the research indicates pathogens capable of becoming epidemics and pandemics are much more common and widespread than we appreciate. According to the model, we have fortuitously avoided activating over 70% of such pathogens into epidemics/pandemics.

However, as human habitations keep pushing into uncharted wildlife environments, we are uncovering new pathogens and introducing them to domestic animals and other wildlife where they can mutate into more virulent forms. Combine this with congested human habitations and it becomes blindingly obvious we are tilting the balance towards the pathogens and more epidemics/pandemics.

If this information does not engender respect and care towards our wildlife habitats, then this simply means the next epidemic/pandemic will occur sooner. It is a sobering thought as I nurse my arm after the inoculation last week, especially as it is almost inevitable the SARS-CoV-2 virus will escape the protection conferred by current vaccines and we will likely need booster vaccinations against new variants of the virus, possibly within 12 months.

What is totally certain is I will be resuming my bottle of wine a day soon. In fact, as I do not smoke, I am probably entitled to drink twice as much, but that might be a touch unnecessary. However, as they say, please do not try this at home.The views expressed here are entirely the writer’s own.

Curious Cook: The future is quite certain and it doesn't look good
Coffee's effects on blood pressure and blood sugar
Curious Cook: A perfect storm that threatens human existence is brewing
Save your child from a lifetime of craving sugar
Classes of glasses: The unique glasses used for cocktails and drinks
From Martinis to Spritzs, there is more to vermouth than you think
Curious Cook: Ice cream and metabolic syndrome
All eyes on nice ice: Using the right ice can make a difference to your drinks
Curious Cook: Foods best not eaten
Curious Cook: An imagined future of dining