Curious Cook: Can diets affect the severity of Covid-19 symptoms? A recent study has shown that people on a plant-based diet had considerably lower odds of having severe Covid-19. — MAARTEN VAN DEN HEUVEL/Pexels

No matter how you feel or think about it, the simple fact is that humans now must co-exist and live with the SARS-CoV-2 virus (which causes Covid-19), and we will likely have to do this forever.

There was a moment at the beginning of the pandemic where there was a statistical chance the virus may have been defeated if the entire world had self-isolated for 35 days. But as this did not happen (probably for many good, and many bad, reasons), the current situation is hundreds of millions of confirmed infections worldwide with at least 4.6 million deaths attributed to Covid-19.

The current situation is still somewhat in flux. It is a total certainty that a complex virus with 29,903 base genes will continue to mutate as it sweeps through a human population of over seven billion. However, the trajectories and probable outcomes of such mutations are not clear. After all, the human flu viruses (from the Orthomyxoviridae family) have a genome of less than 14,000 bases, but this is sizable enough to allow them to mutate so much that new vaccines must be developed each year for the latest flu season in autumn and winter.

The SARS-CoV-2 virus (from the Coronaviridae family) is more than twice as complex as human flu viruses, and this will allow the coronavirus potentially many billions of permutations for new variants. Most such mutations will not endure, of course, but the problem is that some mutations will survive and proliferate, and that is a serious cause of concern as we currently have no real idea of the effects of such variants.

At this point, it should be noted that the rest of this article is based on observations and science-based opinions regarding Covid-19 and other subjects. It is not intended to be medical advice.

There is no better option

Fortunately, at least the world now has the second-best option against Covid-19, which are the vaccines. The vaccinations do not provide total protection against infection (and subsequent re-transmission of the disease), but they do undoubtedly provide protection against severe symptoms and death. The only better option would be a vaccine that provides total lifetime protection against infection, such as the vaccine against smallpox, but this virus appears to be too sophisticated for that, so this better option does not exist at present.

A curious observation is the SARS-CoV-2 virus does not appear to be the actual killer of most humans who have caught Covid-19 and died as a result. That is because most victims of the disease appear to have succumbed due to their own over-active immune system responses to the coronavirus. Without this immunity over-reaction by the body, many victims would have probably survived an episode of Covid-19.

Hence, we can possibly take the view that Covid-19 is more than just a pulmonary disease, as this classification reflects mainly the route by which the coronavirus enters the body. Subsequent to infection, which causes some flu-like symptoms, the virus can also provoke a severe inflammation disorder which can be much more dangerous than the basic symptoms. If this is the case, there may be some dietary and lifestyle suggestions which might help to mitigate the impact of Covid-19.

It should be stated that inflammation by itself is not a bad syndrome as it is the manifestation of the human body’s defences against injuries, toxins, and pathogens. The common signs are (i) redness, (ii) increase in temperature of parts of, or the whole body), (iii) swelling in affected areas, (iv) localised or general pain and headaches, and (v) loss of some bodily function.

In most cases, such symptoms will disappear after the causative agent or event had cleared up.

And chronic inflammation is an entirely different ball game because if it is left to persist, the symptoms get more debilitating bit by bit over time. Such symptoms may include (i) pains and headaches, (ii) persistent fatigue, insomnia, and other sleep disorders, (iii) depression, anxiety, mood, and emotional disorders, (iv) constipation, diarrhea, acid reflux and other digestive problems, and (v) significant changes in body weight.

Chronic inflammation has been linked to heart disease, diabetes, autoimmune diseases, arthritis, allergies, Alzheimer’s, inflammatory bowel disease, cancer, and other illnesses. If one is seriously concerned, there are blood tests which detect compounds such as hs-CRP, IL-6, TNF-alpha, ferritin, fibrinogen, etc., which are known markers for chronic inflammation if found at excessive levels.

One should not be surprised to learn that the food we eat is probably the main factor behind chronic inflammation. The other major factors are severe mental pressures (with the associated negative emotions) and smoking or vaping.

At its simplest level, chronic inflammation arises from a negative feedback loop caused by certain foods, other ingested items (eg, tobacco smoke), or mental pressures which cause oxidative stress within the body.

This oxidative stress leads to the production of inflammatory compounds such as cytokines (eg, IL-1, tumour necrosis factor, etc) which activates the Nuclear Factor-kappa B (NF-kB) pathway, a primary immune system response mechanism which mobilises many other inflammation signalling pathways, and these pathways may in turn release more pro-inflammatory cytokines. 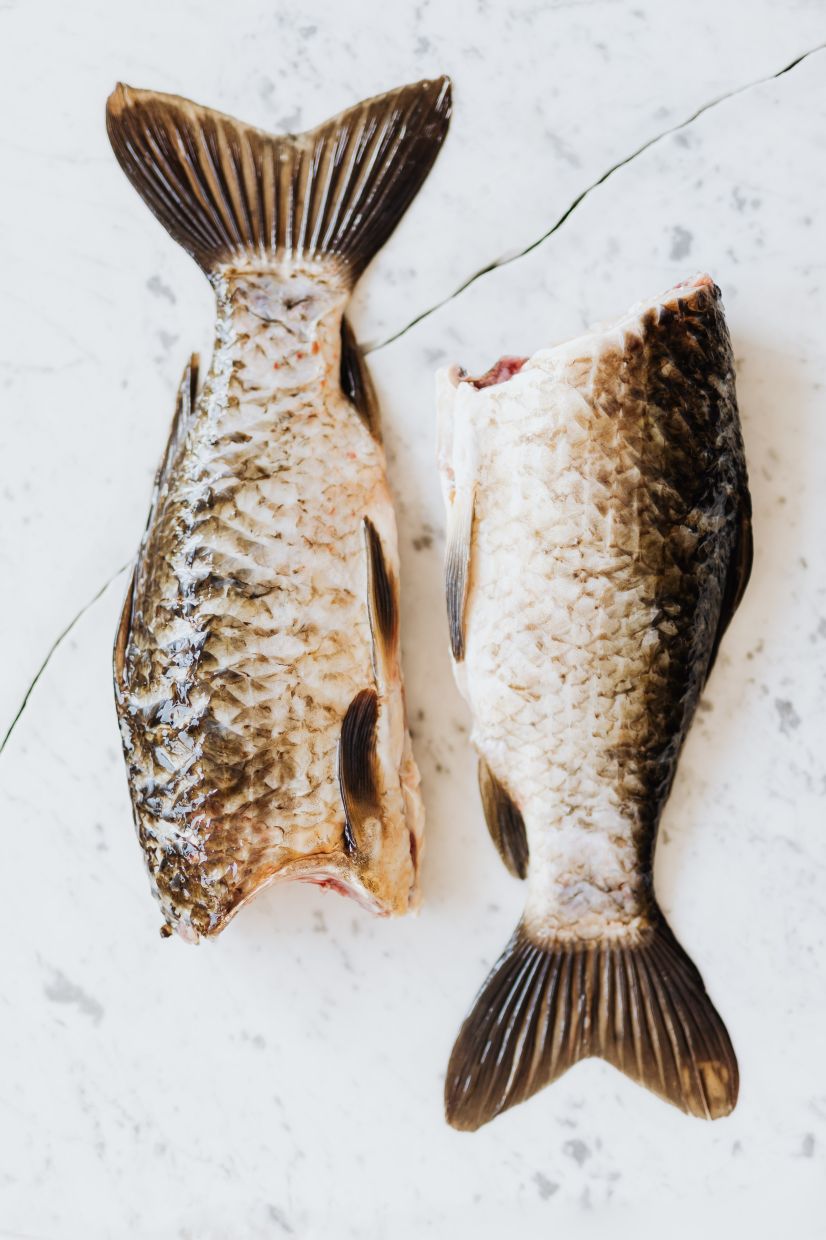 A recent study showed that people on a pescatarian diet (vegetables and seafood only) were 59% less likely to have severe Covid-19 symptoms, as opposed to meat-eaters. — KAROLINA GRABOWSKA/Pexels

The persistent ingestion of certain foods, compounds or poor handling of mental pressures can lead to a constant state of inflammation as the body’s immune systems are continually provoked into a persistent state of activation and readiness against unspecific targets.

The impact of mental stress may also cause people to eat more foods associated with inflammation (e.g, fried, fatty or sugary snacks, low-fibre or trans-fats foods, etc). To compound matters, digestive activities are also affected by mental stress and causes inflammatory foods to further aggravate oxidative stress and sympathetic hyperactivity; this is a cascade effect known as “postprandial dysmetabolism”.

Over time, the efficiency of such affected immune systems may be compromised, and thus may be prone to over-react or behave unpredictably when real pathogens are detected.

A British Medical Journal (BMJ) paper published in May 2021 studied the diets of 2,884 frontline healthcare workers across six countries and the outcomes of 568 of the workers who caught Covid-19.

This led the BMJ paper to conclude, “In six countries, plant-based diets or pescatarian diets were associated with lower odds of moderate-to-severe COVID-19. These dietary patterns may be considered for protection against severe COVID-19.”

The link between eating meat and poorer outcomes of Covid-19 may be due to latent, chronic inflammation. There are many studies which have linked human inflammatory responses with meat consumption – in particular, red and processed meats.

It had been suggested therefore that persistent consumption of such animal proteins may eventually lead to chronic inflammation in humans, probably initially targeting those with poor or deficient gut bacterial microbiomes.

More pertinent may be the wealth of studies which generally concluded that plant-based diets are associated with significantly lower levels of chronic inflammation. This may be due to the presence of unique compounds in such diets which have some perceived positive effect against oxidative stress.

If a wholly plant-based diet is impossible, then the next best option against chronic inflammation may be fish-based diets or any diets which avoid red meats or processed animal proteins, combined with eating five greens and/or fruits every day. Human inflammatory responses have been linked to meat consumption, which is why there is a plausible link between eating red meat and poorer outcomes of Covid-19. — NADIN SH/Pexels

There are very interesting studies which have linked intermittent fasting with significantly lower levels of cytokines and therefore less inflammation issues. A 2006 paper from Maltepe University, Turkey, found that certain target cytokines were lower by 50% in people fasting during Ramadan compared with pre- and post-Ramadan levels.

Yet more fascinating was a 2008 joint USA-Italy study which found that mice responded very much better to chemotherapy after fasting. Several strains of mice were injected with aggressive cancer cells, and some groups were starved for periods between 48 to 60 hours. The other mice were allowed to continue their diets without change.

One explanation for this result was that starvation caused a reduction of a hormone called IGF1 (Insulin Growth Factor 1) and this has been known to help prevent oxidative stress in cells.

However, cancer cells are not affected by IGF1, and the application of chemotherapy drugs therefore impacted cancerous cells more than the normal cells now protected against oxidative stress. For the mice which had not been starved, the drugs appeared to destroy both normal and cancer cells. Does having chicken soup for your cold really help?
Curious Cook: Food and greenhouse gas emissions
Never mind the name, is Timah even a whiskey in the first place?
Curious Cook: Food score cards
Curious Cook: The new F-word of the future?
Jumping for juniper joy: A guide to gin and its different styles
Curious Cook: The human metabolism puzzle
Drink up your tea for good health
To wash or not to wash your meat before cooking
Tips for the best, easy-to-make breakfast