Called the “Feast of Versailles”, the four-hands dinner menu at The Brasserie, The St Regis Kuala Lumpur, is inspired by 100 years of French gastronomy (1600s to the 1700s).

The chefs in replicating the menu, sourced for similar ingredients as those grown in the palace’s famed Orangerie garden, nearby Potager du Roi (The King’s Kitchen Garden).

From The Queen’s Grove is inspired by jasmine plants at the palace’s The Gardens.

The bubbly champagne with jasmine reduction is aromatic and floral, with the flower, clipped on the edge of the glass, luring diners with its scent.

The concept was fun and appetising, proving to be a spendid pairing to the amuse-bouche that featured favourite appetisers of the king such as royal oyster, snail croquette and vegetables tartelette sourced from the Versailles Garden as well as a serving of Lobster Bouchée à la Reine. 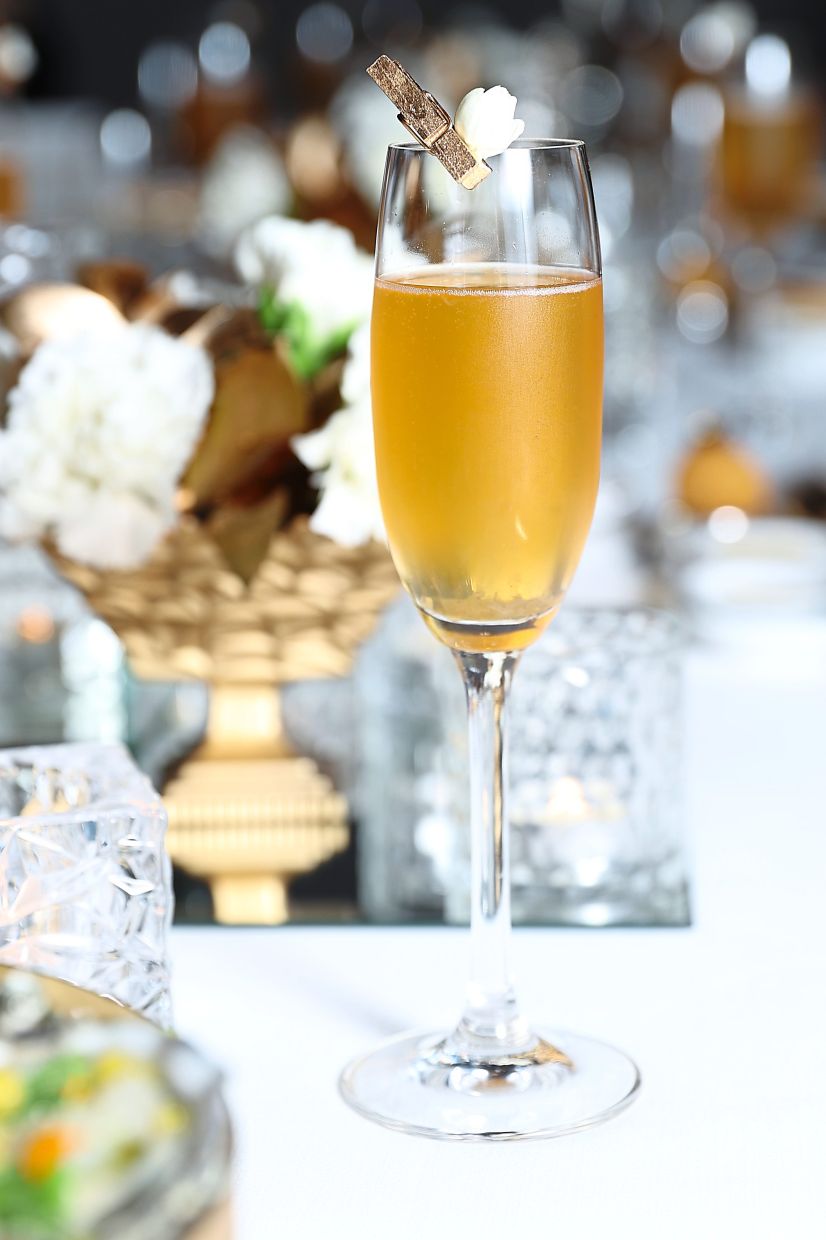 From the Queen’s Grove is inspired by jasmine flowers in The Gardens in Versailles.

“Cooks back then sourced ingredients from The King’s Kitchen Garden near the Palace of Versailles where vegetables and fruits were grown for the king’s consumption.

“Soup is always served at the start of every meal King Louis XIV has.”

“The sweetbread was frozen to stop the bleeding before compressing it to give it more flavour.

“It is then cooked with spices and served with a myriad of garnishes, ” he said.

The clear broth with pronounced taste of beef was paired well alongside barley and diced vegetables. The Orangerie, an India pale ale with lemon Oleo Saccharum and malt shrub was served with the soup. The hoppy drink was a perfect concoction with pleasant fruity sweetness.

Then came the seafood dish – Balade sur la Seine – in honour of fishing which was a favourite pastime of French nobles and artists.

The torched salmon, served with salmon roe and caviar on crispy fish skin, was livened up with fresh flavours of Jerusalem artichokes, green peas and parsley emulsion.

The salmon, however, took centre stage with the varied textures of savoury trout roe, caviar and crispy skin.

This was paired with Rose Bertin, a brown butter washed gin, white wine, rose and citrus. The mildly floral citrus drink with creamy notes was a winning flavour even for non-gin lovers like me.

The main course was none other than Le Pithivier de Louis with chunky beef filling enveloped in layers of minced chicken and beef with duxelles, foie gras as well as chicken and vegetable stuffing.

With its origins in the town of Pithivier in France, the pastry and meat dish initially featured sweet fillings but later evolved to incorporate savoury fillings.

“The fillings are cooked separately. The minced chicken breast is mixed with cream, while the beef striploin and foie gras are pan-seared while the cabbage is lightly blanched with salt.

“Then, we construct the dish by using a bowl to hold the puff pastry and the fillings before wrapping the pastry over, ” said Torrente. The tender and succulent beef with the various ingredients offered a burst of flavours on the taste buds.

The King’s Barry with Cassis and Chivas 12 Years was a splendid complement to the dish.

The tartness of mixed berries and strong smoky notes from the whiskey made the entire combination wholesome and it would have been a perfect 10, to me, if it was a little less sweet.

The desserts, Louis XIV and Louis XV, were exceptional and named to remember two kings and their favourite desserts.

The former has wild strawberries, brie cream and strawberry sorbet while the latter is made into an orange-shaped chocolate mousse. It was paired with The Venus – Chivas 12 Years, Amaro Montenegro, Aperol and lemon juice.

A French dining experience is not complete without macarons and so we had three different types.

The different texture and consistency of the meringue and fillings tell the tale of how Catherine de Medici crossed the Italy-France border with maccherones (Italian meringue) when she migrated to marry King Henry II of France in 1533 and its evolution to the present-day dessert that many know and love.