A mix of traditional and creative elements is the key to producing a splendid range of dim sum and mooncakes.

At Grand Imperial Restaurant, one can expect favourites such as har gao (steamed shrimp dumplings), siew mai with prawn and fried beancurd skin roll in chicken soup on its daily dim sum menu.

Foo said people stayed close to tradition and preferred ordering comfort food that they are familiar with.

“Customers always reminisce about the good old days and enjoy the food they savoured while growing up.

“However, they are willing to try new things and at Grand Imperial Restaurant, we give them the flexibility to do just that, ” she said.

Customers are spoilt for choice with the various steamed and fried dim sum available for breakfast and lunch.

The steamed siew mai with prawns was simple yet satisfying while the barbecue pork buns (char siew pau) did not disappoint.

The pau’s piping hot sweet and savoury filling was perfect with the fluffy buns.

Usually served in sweet tomato or sweet sauce, the fried beancurd skin roll was served in a pool of chicken soup which was a refreshing change to the palate.

For something more substantial, try the Stir-fried Cheong Fun with XO Chilli Sauce.

Aside from the daily dim sum offering, Foo has collaborated with external dim sum and pastry chef Chan Weng Kong to produce baked and snow skin mooncakes in conjunction with the Mid-Autumn Festival.

We had the opportunity to see Foo and Chan in action as they showed guests the process of making baked and snow skin mooncakes.

It was interesting to watch Chan deftly envelope a ball of white lotus paste with mooncake skin.

The mooncake maestro’s swift and smooth hand movements was evident of his 35 years of culinary experience.

In less than a minute, he knocked a mooncake out of its mould.

“There are still a lot of people who love traditional mooncakes despite the various creative selections in the market.

“Mid-Autumn is an important festival and celebrated widely among the Chinese community. It is a significant occasion among family members, ” said Chan who mastered the art of dim sum while working in Indonesia and Singapore.

The baked mooncakes are his speciality.

Foo, on the other hand, specialises in snow skin mooncakes and one of her featured creations this year is snow skin custard and chicken floss mooncake.

The sweetness from the creamy yellow custard strikes a wonderful balance with the savoury chicken floss filling in the mooncake.

It was better than expected as the unusual combination fared exceptionally well in both taste and presentation.

“Although most people prefer traditional mooncakes, those who are looking for something special can go for this snow skin custard and chicken floss mooncake, ” Foo added.

Another snow skin selection available is snow skin white lotus single yolk mooncake. The mooncake promotion is until Oct 1 and the mooncakes are priced from RM21.10 each. 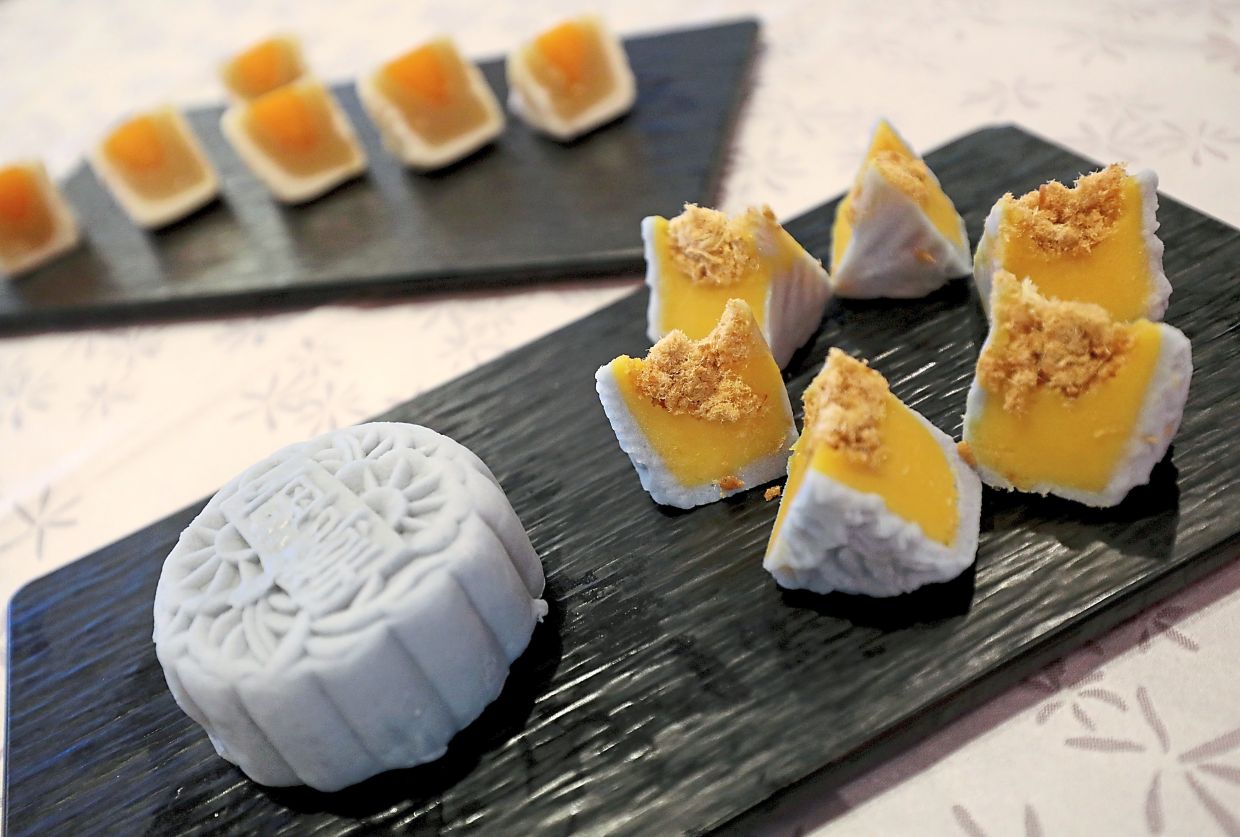 The stir-fried cheong fun has a hint of spiciness thanks to the XO chilli sauce.