When Datuk Ghani Abdullah first sets his eyes on the old building that used to house the old Sin Seng Nam Restaurant on Medan Pasar in Kuala Lumpur a few years ago, he was so intrigued by the back-story of the location that he knew he had to make a connection soon.

He was so fond of the location that he decided to acquire it and turn it into a coffeeshop again.

For the next two years, Ghani made plans to acquire the property and became a regular visitor to the shoplot to learn more about the neighbouring shops.

“I just love the place, with its high ceiling and old architecture. There is something very quaint about it. To me, this is history at its best. The building might be old, but it has not lost its charms. While some parts of the shoplot were a bit rundown and dilapidated, somehow being in it gives you a certain pride.

“For me, it was like it was inviting me to be the new owner,” said Ghani, chairman of Old Market Square Sdn Bhd. The old Sin Seng Nam coffeeshop used to be frequented by many for breakfast, and Kafe Old Market Square hopes to continue the tradition.

In its glory days, Sin Seng Nam Restaurant was a popular place frequented by many customers from all walks of life.

It was started in 1928 by Hainanese immigrant Choong Yoo Ting and his two brothers.

After acquiring the shoplot, Ghani sat down with an architect friend to work out how best to restore the building. The renovation took a while and Ghani wanted to retain its colonial touch. He finally launched the restaurant and named it Kafe Old Market Square last month.

“I’m was bursting with pride when I was finally able to take over the restaurant. All the sleepless nights planning and developing the place was worth the effort. I’m sure those who used to frequent the shop in the past will be happy to revisit history and come back to this place.

“I tried my best to restore the historical part of this building and hopefully bring back the glory days of Sin Seng Nam Restaurant. This was the meeting place of a lot of civil servants, judges and lawyers,” said the businessman who was formerly a lawyer.

For Ghani, going to Kafe Old Market Square is like “historical Malaysia on a platter”.

“The building is a central part of the Malaysian heritage and there is a rich culinary journey attached to the restaurant too.

“The story of the food, which was once served here, is a melding of different cultures and cuisines.

“The uniqueness of Malaysian food, which is an exotic fusion of cultural influences that evolved over time actually began here. Nothing else can recapture this part of history,” he said. Ghani says the building might be old but it has not lost its charm.

Kafe Old Market Square will definitely bring old memories back to life. In the past, businesses were family affairs. The humble coffeeshop wasn’t just a place to savour a favourite brew, but also a place to meet friends, have business lunches, and a place to unwind and catch up on the latest gossip.

“I asked around and I found that the loyal customers of Sin Seng Nam comprised petty traders, miners and gamblers, and eventually included judges, businessmen and members of government. In fact, the entire spectrum of society went there. Everyone was eating happily enjoying the same food for the same prices and embracing the same ambiance. Such were the good old days,” recalled Ghani, who used to frequent the restaurant when he was a young lawyer.

And after 85 years, Sin Seng Nam served its last meal on Feb 28 last year. It was the end of an era. Malaysian favourites like chicken rice are still served at the cafe.

However, thanks to Ghani, restoration began to transform the beloved coffeeshop back to its former glory and Kafe Old Market Square was born.

“At first, I wanted to retain the old name but because of legal reasons, I decided to call it Kafe Old Market Square.

“To retain as much of the past as possible, I decided to bring back the old cooks and workers because I want to serve the same Hainanese food. Hainanese food is famous for its all round popularity.

“Here at Kafe Old Market Square, you will get experience all that was good from the past. The taste is simple and has no frills,” he said.

“People of all races used to flock to this place in the past just to savour the food. I decided to retain the same food, cooked by the same people where possible or using the same recipe at least,” he said.

To make the three-storey shoplot even more interesting, the top floor of the building has been transformed into a gallery that showcases old Kuala Lumpur. Artwork and old photos of Kuala Lumpur now adorn the walls of the cafe.

“I tried to retain much of the original structure and fittings so people can take a step back in time, away from modern trappings, and experience our heritage at it’s best.

“You can take time to enjoy the photo gallery of old Malaysia and we have also included an additional space for our art lovers. It’s a small, intimate space reserved for those who want to remember our heritage,” said Ghani.

Old pictures of past leaders and the history of Malaysia decorate the white walls.

There are also images of Yap Ah Loy, the founding father of modern Kuala Lumpur and old photos of the city as it developed into a commercial and mining centre during the mid-19th century.

The second floor is for customers who want to unwind and enjoy their lunch in a quieter space.

“It’s a lepak place where they can come and enjoy the food, the ambience with their own age group. Younger people love to hang out with their peers and this place is ideal for them,” he said.

Ghani aspires to set up a few more branches in the Klang Valley modelled on Kafe Old Market Square.

“I would really love to set up a few more shops of the same type, using the same concept, with the same ambience. I really hope it will be a popular place for KL-ites,” said Ghani.

Kafe Old Market Square is also open for private functions and those interested can call 03-2022 2338. 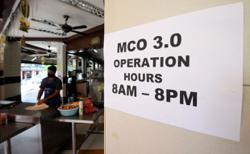