Shariza's helper tempts with an array of fried chicken offerings at the Jelapang night market in Perak.

Before long, tying the knot became a pressing matter for the secondary school counselor.

To raise the cash for his wedding, Azizi came up with the idea of selling fried chicken.

“It wasn’t a big operation, just a roadside stall at Taman Equine in Seri Kembangan, a suburb in Selangor. I started with five chickens, which sold out within the hour,” recalled Azizi.

By the Ramadan season, Azizi who had strictly confined his entrepreneurial pursuits between 4pm and 8pm so as not to interfere with school work, was selling up to 40 chickens a night and hitting sales of RM5,000 a month.

“There was always a long queue at my stall. It made me very proud that I had, in my own way, made a mark as a small-time entrepreneur,” recalled Azizi, today a happily married man.

The commercial viability of fried chicken is hard to dispute. We all know the story of Kentucky Fried Chicken. In 2012, finger licking goodness generated revenue of RM3.04bil in Malaysia. Last year, the Malaysian company than runs KFC here was delisted from Bursa Malaysia following a massive buyout of RM5.12bil.

However, one doesn’t need big money to get into the fried chicken business. Even the budget-conscious entrepreneur is able to get a feel of owning a fried chicken franchise for as low as RM3,000 in a night market.

“Back then, fried chicken meals were only found in outlets like KFC and A&W. My mother, then a housewife, saw the opportunity to offer a more economical variant and opened a hawker-style stall in Kampung Simee, a new village near Ipoh Garden,” said Liew.

The response, in Liew’s words, was pretty hot as Loh was selling up to 30 chickens a day, and she only operated in the evenings. 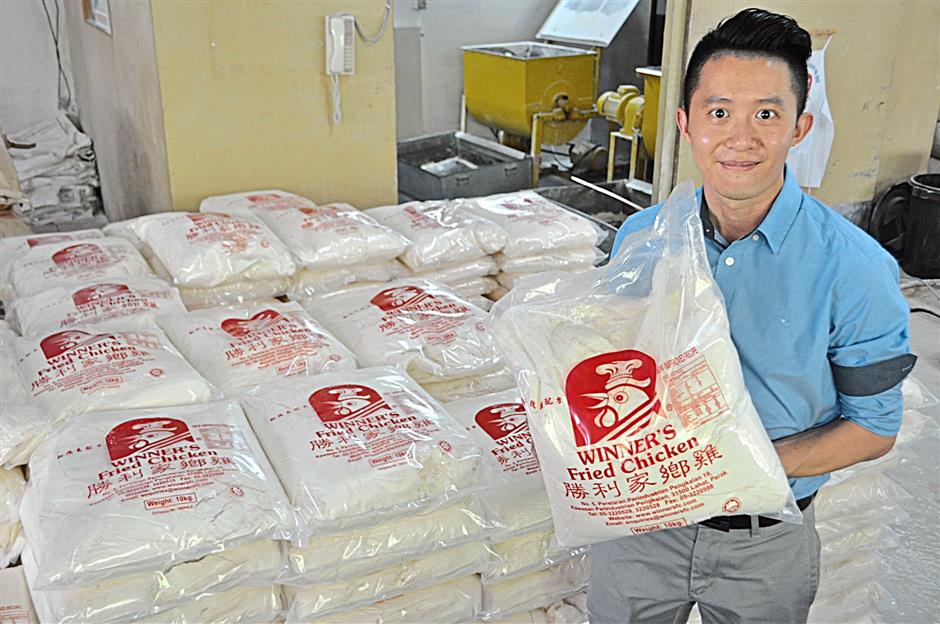 “My mother was amazing. From a one-woman show, she grew Winner’s to 400 over stalls in Malaysia, with 100 in Kuala Lumpur alone,” said Liew.

To the best of Liew’s recollection, the idea of a franchise came about when Loh was trying to find ways to expand. Opening additional outlets was a sure solution, but where was the trustworthy labour going to come from?

After much brainstorming, the franchise idea dawned on Loh. She would sell her brand, her secret fried chicken flour recipe of seven herbs and spices, together with the paraphernalia for a roadside stall.

For RM4,000, franchisees got a display case, a frying pot, 10kg of the flour recipe and a signboard. Her first four supporters were relatives. By 1987, she had 31 new franchisees.

“I remember this because my mother threw a commemorative party where all her franchisees were given appreciation plaques and reporters from China Press came to take pictures,” recalled Liew, then only nine.

From the original group of franchisees, the oldest license holder would be Chan Chee Sum, who is currently operating on Jalan Sayur in Pudu, Kuala Lumpur.

In 1990, Loh moved on to become a motorcycle retailer after appointing her husband, Hon Wah, as Winner’s managing director.

Last year, the reins were handed over to Liew, who now reports monthly production of one tonne of frying flour from their Pengkalan factory. They now also export about RM30,000 worth of the flour a year to China, Bangladesh and Singapore.

Currently, the rate of growth for the domestic market is three new licensees a week, with a gentleman’s agreement dictating that no two Winner’s stalls can be opened within 3km of each other. 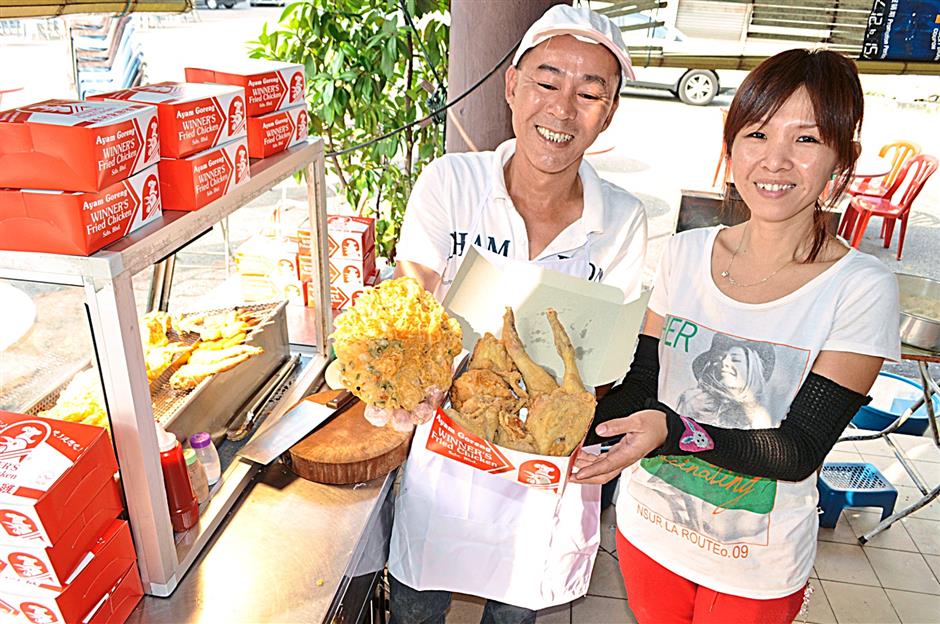 One franchisee is Lee Teck Hoong, 44, and his wife, Chan Phooi Kuan, 39, from Menglembu in Perak.

Lee, a mosaic layer by day, reveals the idea of joining the franchise was not only to earn extra income but keep a family together. Initially, his wife worked in Singapore as a seamstress, but with three growing children, distance was making parenting a challenge.

So far, they are getting on pretty well, selling up to 16 chickens a night except during the low season when sales can drop as much as 40%.

What makes fried chicken such an attractive draw is its convenience, according to Leong Lai Choo, 48, of Nyonya One, a night market nasi lemak business.

“When my husband and I started selling our nasi lemak at the night markets in Petaling Jaya and Kuala Lumpur in 2004, we knew we had to have extra fried drumsticks and thighs. Sure enough, the chicken became a draw. Though we are supposed to be nasi lemak specialists, some 70% of our sales comes from fried chicken,” said Leong.

Dissecting the why, is Jeffrey Abdul Rahim, who hawks Uncle Bob’s fried boneless chicken chops at a night market in Jelapang, Perak.

“In nasi lemak or laksa, for example, there is a lot of preparation involved. You have to peel shallots, slice cucumbers... but with fried chicken, it’s just cutting it to the right size, flouring and then deep frying. Clean, easy, no fuss,” he explained.

Shariza Ahmad, 42, said customers were not only drawn to the normal cuts, but also everything else — skin, feet, carcass and bishop’s noses.

She uses at least twenty 10kg bags of flour a month for frying chicken. Though she is keeping the sales figures of her operation under wraps, she reveals an evening at a night market sees no less than 100 carcasses sold at RM2.50 each.

So just how lucrative is it?

Recalls Azizi of his entrepreneurial heyday, the price of one broiler then, was only RM12.

“At that time, I was selling at RM2 a piece. All in, I made RM12 per chicken in profit. Eventually, price hikes pushed it to RM14, so I started selling at RM2.50 and I was making RM16 per chicken,” he said.

Just by banking on the tempting aromas of piping hot, crispy fried chicken alone, Azizi eventually saved enough to open a restaurant, in a shoplot just opposite where his stall used to be. The extra overheads, he admitted, did him in.

He still managed to cover costs after reaching a target of RM1,000 in sales a day, but keeping up with the pace was overwhelming him. He had his job as a counselor to think of and a newborn baby he spent too little time with.

“I gave up the restaurant after a year. My wife and I made the decision. In the end, we decided our family and my students would come first,” recalled Azizi.

But he has not entirely discarded the efforts of his early days.

Today, if you see the Raja Ayam Goreng banner, take the opportunity to get a taste of their spicy, Kelantan style fried chicken. Operations have now been taken over by Azizi’s sister, Azairulhasliza and her husband.

They usually make the university campus rounds during expos, thanks to Azairulhasliza’s background as a food technology graduate from University Pertanian Malaysia. 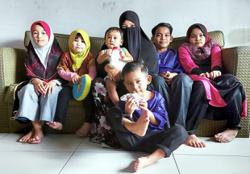 Widow to use aid to expand husband’s fried chicken business 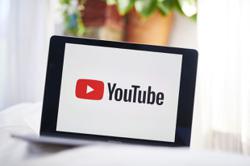 YouTube slammed by Grammy winner for not protecting copyrights